You are here: Home › computer science › John William Mauchly and the Electronic Computer 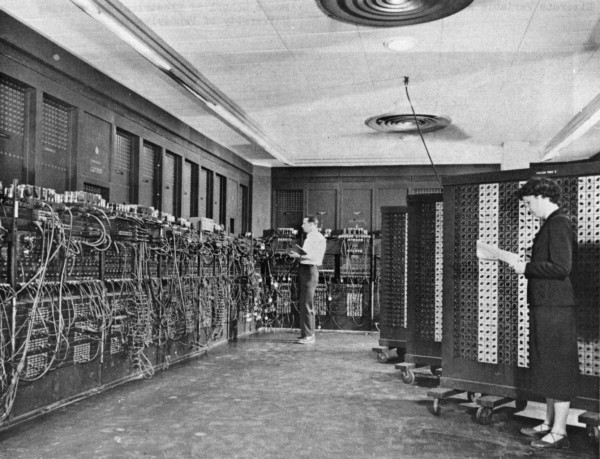 On August 30, 1907, US-American physicist John William Mauchly was born. Along with J. Presper Eckert, Mauchly designed ENIAC, the first general purpose electronic digital computer, as well as EDVAC, BINAC and UNIVAC I, the first commercial computer made in the United States. Together they started the first computer company, the Eckert-Mauchly Computer Corporation (EMCC), and pioneered fundamental computer concepts including the stored program, subroutines, and programming languages.

John W. Mauchly was born in Cincinnati, Ohio, USA, to Sebastian Jacob Mauchly and Rachel Scheidermantel Mauchly. He moved with his parents to Chevy Chase, Maryland, when Sebastian Mauchly obtained a position at the Carnegie Institute of Washington, DC, as head of the Department of Terrestrial Magnetism. Already as a youth, Mauchly was interested in science, and in particular with electricity, and was known to fix neighbors’ electric systems at the age of 13 or 14. After attending E.V. Brown Elementary School in Chevy Chase and McKinley Technical High School in Washington, DC. At McKinley, Mauchly earned a scholarship by the State of Maryland to study electrical engineering at Johns Hopkins University in Baltimore, Maryland. He subsequently transferred to the Physics Department, and without completing his undergraduate degree, instead earned a Ph.D. in physics in 1932.

From 1932 to 1933, Mauchly served as a research assistant at Johns Hopkins University where he concentrated on calculating energy levels of the formaldehyde spectrum. Mauchly’s teaching career truly began in 1933 at Ursinus College, a small, liberal arts college located in the outskirts of Philadelphia, where he was appointed head of the physics department, where he was, in fact, the only staff member. Unfortunately, Ursinus did not suit the research interests to which he had been so thoroughly conditioned. For the summer of 1936, Mauchly decided to take up a position as temporary assistant physicist and computer at the Carnegie Institution’s Department of Terrestrial Magnetism, undertaking research on analysing the weather, where he soon realised that to make weather forecasts it was necessary to reduce large amounts of data very quickly, and he began to look for mechanical help in making such computations.[2] Also Mauchly’s interests were in electrical engineering and he looked for ways to develop electrical circuits for computation.

In the summer of 1941, Mauchly took a Defense Training Course for Electronics at the University of Pennsylvania Moore School of Electrical Engineering. There he met the lab instructor, J. Presper Eckert, with whom he would form a long-standing working partnership. Eckert encouraged Mauchly to believe that vacuum tubes could be made reliable with proper engineering practices. Following the course, Mauchly was hired as an instructor of electrical engineering and in 1943, he was promoted to assistant professor of electrical engineering. Following the outbreak of World War II, the United States Army Ordnance Department contracted the Moore School to build an electronic computer which, as proposed by Mauchly and Eckert, would accelerate the recomputation of artillery firing tables.

Mauchly, Eckert, Goldstine and the ENIAC

In 1942 Mauchly wrote a memo proposing the building of a general-purpose electronic computer, which circulated within the Moore School and emphasized the enormous speed advantage that could be gained by using digital electronics with no moving parts. Herman Goldstine, who was the liaison between the United States Army and Moore School, picked up on the idea and asked Mauchly to write a formal proposal. In April 1943, the Army contracted with the Moore School to build the Electronic Numerical Integrator and Computer (ENIAC) [5]. Mauchly led the conceptual design while Eckert led the hardware engineering on ENIAC. A number of other talented engineers contributed to the confidential “Project PX”, which in 1946 resulted in the completion of ENIAC, a huge machine containing more than 18,000 vacuum tubes that incorporated features developed by J.V. Atanasoff [4].

Because of its high-speed calculations, ENIAC could solve problems that were previously unsolvable. It was roughly a thousand times faster than the existing technology. It could add 5,000 numbers or do 357 10-digit multiplications in one second. ENIAC could be programmed to perform sequences and loops of addition, subtraction, multiplication, division, square-root, input/output functions, and conditional branches. Programming was initially accomplished with patch cords and switches, and reprogramming took days. The ENIAC was first used by the U.S. Army at its Aberdeen Proving Ground in Maryland in 1947 for ballistics tests. Of course World War II was over but the machine was used intensively, particularly on top secret problems associated with the development of nuclear weapons. Von Neumann was working on this project and became involved with the ENIAC computer and used it to solve systems of partial differential equations which were crucial in the work on atomic weapons at Los Alamos.[2]

The ENIAC was not rather reliable. Several tubes burned out almost every day, leaving ENIAC nonfunctional about half the time. Special high-reliability tubes were not available until 1948. Most of these failures, however, occurred during the warm-up and cool-down periods, when the tube heaters and cathodes were under the most thermal stress. Engineers reduced ENIAC’s tube failures to the more acceptable rate of one tube every two days. According to an interview in 1989 with Eckert, “We had a tube fail about every two days and we could locate the problem within 15 minutes.” In 1954, the longest continuous period of operation without a failure was 116 hours—close to five days.

Both Mauchly and John Eckert left the Moore School at the University of Pennsylvania in October 1946. In 1947 Eckert and Mauchly formed the first computer company, the Eckert-Mauchly Computer Corporation (EMCC). Eckert took care of the engineering functions, and Mauchly ran the business [3]. John Mauchly and J. Presper Eckert, proposed the EDVAC’s construction in August 1944, which was supposed to be the successor of ENIAC. A contract to build the new computer was signed in April 1946 with an initial budget of US$100,000. EDVAC was delivered to the Ballistic Research Laboratory in 1949. Functionally, EDVAC was a binary serial computer with automatic addition, subtraction, multiplication, programmed division and automatic checking with an ultrasonic serial memory[ having a capacity of 1,024 44-bit words. EDVAC’s average addition time was 864 microseconds and its average multiplication time was 2,900 microseconds.

Mauchly and Eckart secured a contract with the National Bureau of Standards to build an “EDVAC II”, later named UNIVAC.[7] UNIVAC, the first computer designed for business applications, had many significant technical advantages such as magnetic tape for mass storage. As an interim, they created and delivered a smaller computer, the Binary Automatic Computer (BINAC). One of the major advances of this machine, which was used from August 1950, was that data was stored on magnetic tape rather than on punched cards.[2] John Eckert and Mauchly were better at computer design than they were at the economics of running a company. The problem really lay in the fact that this was such a new area that costs of production were extremely hard to estimate. As a consequence, in 1950 the Eckert–Mauchly Computer Corporation was acquired by Remington Rand, Inc. (later Sperry Rand Corporation)[1] and became the UNIVAC division. 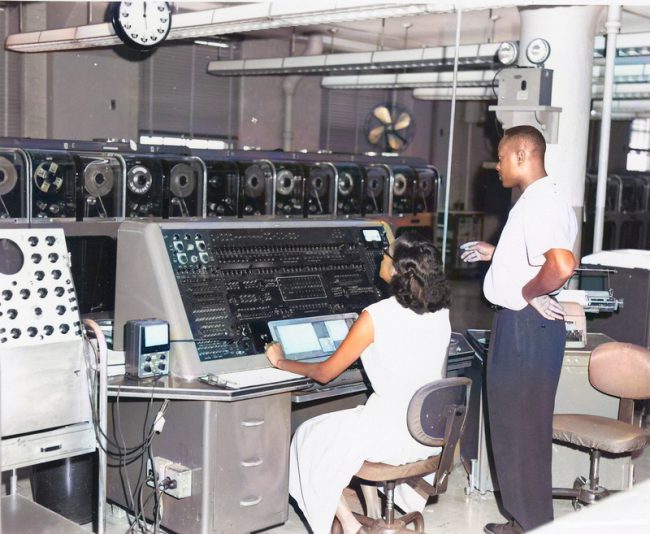 Univac I at Census Bureau with two operators c. 1960

Very early in the history of EMCC, John Mauchly assumed responsibility for programming, coding, and applications for the planned computer systems. His early interaction with representatives of the Census Bureau in 1944 and 1945, and discussion with people interested in statistics, weather prediction, and various business problems in 1945 and 1946 focused his attention on the need to provide new users with the software to accomplish their objectives. Mauchly’s interest lay in the application of computers, as well as to their architecture and organization. His experience with programming the ENIAC and its successors led him to create Short Code, the first programming language actually used on a computer, only predated by Konrad Zuse’s conceptual Plankalkül. Short Code was a pseudocode interpreter for mathematical problems proposed in 1949 and ran on the UNIVAC I and II. Mauchly’s belief in the importance of languages led him to hire Grace Murray Hopper to develop a compiler for the UNIVAC.

In 1959, Mauchly left Sperry Rand and started Mauchly Associates, Inc. One of Mauchly Associates’ notable achievements was the development of the Critical Path Method (CPM) which provided for automated construction scheduling. Mauchly also set up a consulting organization, Dynatrend, in 1967 and worked as a consultant to Sperry UNIVAC from 1973 until his death in 1980. Mauchly received numerous award and honors. In 1949, Mauchly received the Potts Medal from the Franklin Institute in the category of Computer and Cognitive Science. Together with Eckert, he received the Harry Goode Medal of the American Federation of Information Processing Societies in 1966 and posthumously the IEEE Computer Society Pioneer Award in 1980.