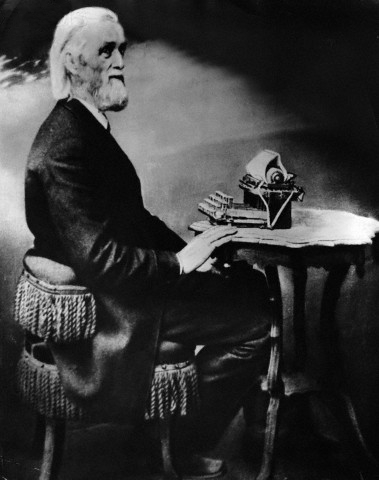 On February 14, 1819,  American inventor Christopher Latham Sholes was born, who invented the first practical typewriter and is responsible for the  QWERTY keyboard layout still in use today.

Born on a farm in Montour County, Pennsylvania, USA, Christopher Latham Sholes worked in Madison, Wisconsin, as a printer and later as editor of Bender’s Newspaper. In this city he was one of the co-founders of the Republican Party of the State of Wisconsin; he had previously belonged to the Free Soil Party. In later years, he joined the Liberal Republican Party and most recently the Greenback Party. From 1848 to 1849 and from 1856 to 1857 Sholes sat in the State Senate; between 1852 and 1853 he was a member of the Wisconsin State Assembly. During the Civil War he served as a postman in Milwaukee.

The Idea of a Printing Device

He started a partnership Samuel W. Soule, Charles F. Kleinstuber, and Carlos Glidden to develop a printing device, focusing on numbers at first. Unfortunately, they were not the only ones, since numerous patents were applied for globally. The curious printers and inventors around Sholes however, found that all machines broke easily and could not maintain on the market.

Their recently built numbering machine became a somewhat great success and they decided to work on a further device, assisted by the German clock builder Matthias Schwalbach and by September of 1866, a model including the full alphabet, numbers and basic punctuation was completed. They immediately began typing letters to potential buyers of their idea and found in James Densmore a decent investor. The patent for the ‘typewriter‘ was filed on June 23, 1868 and its manufacture began in Chicago with the financial help of Densmore. This typewriter was reasonably handy and one could write on it as fast as by hand. Although it was not the first typewriter in the world – this goes back partly to Peter Mitterhofer (1866) -, it was the first to use the QWERTY keyboard layout still in use today; its key arrangement was conceived by Sholes.

The businessmen, inventors and engineers continued their development on the machine building on work of other typewriter engineers as well. The new machines were tested on people like James Clephane, who was occupied as a stenographer and destroyed numerous machines through his heavy use. After further versions and refinements, the typewriter entered the market on July 1, 1874. 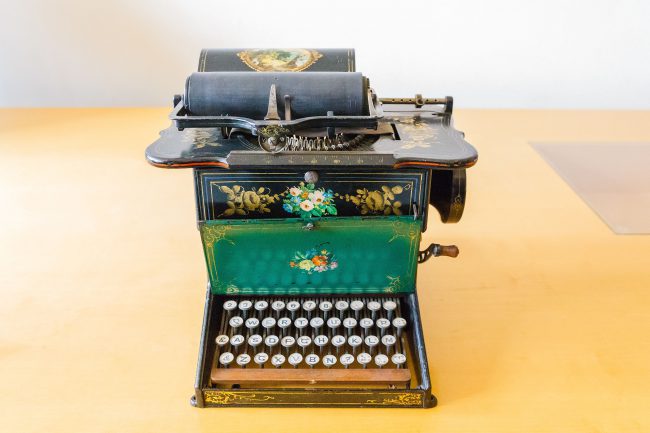 The Sholes and Glidden typewriter (also known as the Remington No. 1)

Even though numerous tests were performed the machines still lacked of reliability and were only sold 400 times by the end of 1874. It was exhibited at the Centennial Exhibition two years later, but Alexander Graham Bell [4] clearly focused the attention on himself demonstrating the telephone. However, Mark Twain was one of the first authors to buy and use the typewriter for his works. In a letter to his brother in 1875, he noted:[5]

“I am trying get the hang of this new fangled writing machine, but am not making a shining success of it. However this is the first attempt I have ever made, & yet I perceive that I shall soon & easily acquire a fine facility in its use. . . .The machine has several virtues. I believe it will print faster than I can write. One may lean back in his chair & work it. It piles an awful stack of words on one page. It don’t muss things or scatter ink blots around. Of course it saves paper.“

During the years of development, the QWERTY keyboard was invented. Early versions contained a total of two rows with alphabetically ordered letters. The problem with the arrangement was that the metal arms jammed into neighboring arms when pressed either at the same time or shortly after. Commonly used letter pairs were to be separated from each other, this way the speed of typing could also be increased. After years of rearranging the letters and numbers on the keyboard and the QWERTY keyboard as we know it today was born.

In 1873 Sholes sold his typewriter to the Remington Arms Company in New York. This company produced only weapons and sewing machines and had to be convinced by Sholes of a new product. After a modification, the typewriter came onto the market as Sholes & Glidden Type Writer on 1 July 1874 and was produced until 1878. The typewriter business was later sold and renamed Remington Rand.