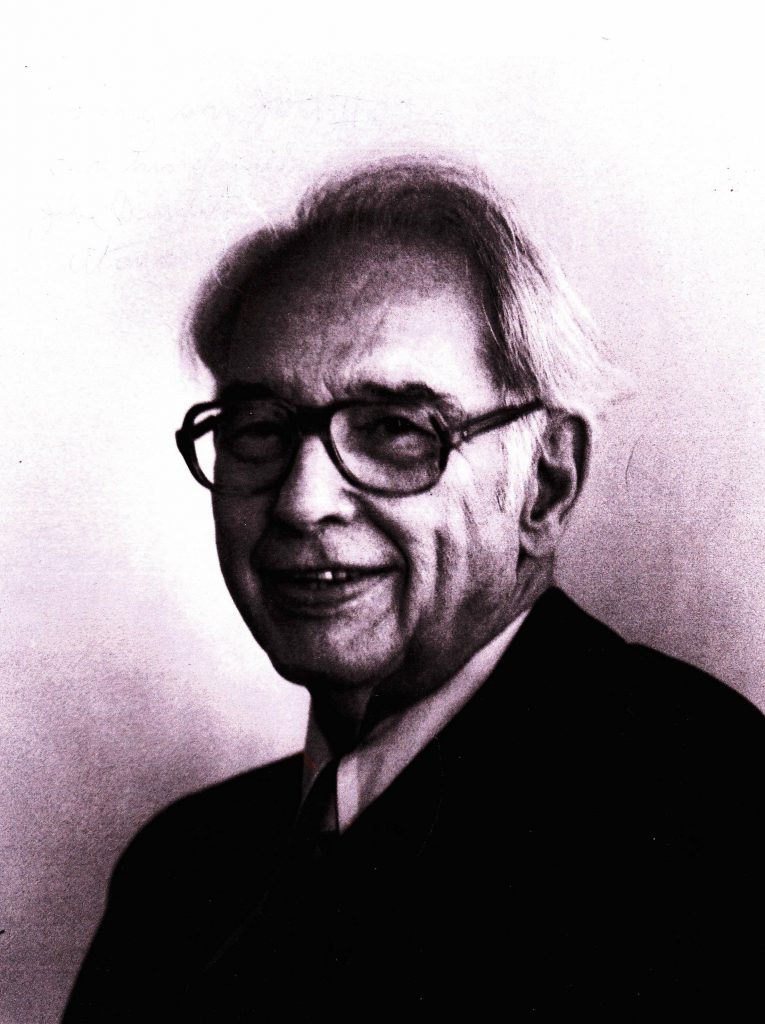 On October 4, 1903, American physicist and inventor John Vincent Atanasoff was born. He is best known for being considered as one of the inventors of the electronic digital computer. Even computer scientists most probably haven’t heard anything of this computer pioneer. Of course you will have heard about Alan Turing [5] or John von Neumann,[6] who are traditionally referenced as being the fathers of modern computers. Maybe, in case you are German, then you might have heard of German engineer Konrad Zuse,[4] who in near total intellectual isolation constructed the first universal computer Z3, which became operational in May 1941. So why is it, that most of us — including myself, and I have a PhD in computer science — haven’t heard of John Atanasoff?

“To get ahead in the world you have to make a lot of noise, and maybe I didn’t make enough.”
– John Vincent Atanasoff [7]

John Atanasoff, of Bulgarian, French and Irish ancestry, was born on October 4, 1903 in Hamilton, New York to Ivan Atanasoff, an electrical engineer and a school teacher, who had immigrated to the United States in 1889. Atanasoff’s mother, Iva Lucena Purdy, was a teacher of mathematics. Atanasoff was raised in Brewster, Florida. Already at the age of nine he learned to use a slide rule and logarithms. In 1925, he received his bachelor of science degree in electrical engineering from the University of Florida and continued at Iowa State College, where he earned his master’s degree in mathematics in 1926. In 1930 by he received a PhD in theoretical physics from the University of Wisconsin–Madison with his thesis, The Dielectric Constant of Helium, and accepted a professorship at Iowa State College in mathematics and physics.

The ABC – the Atanassoff Berry Computer

While working on his PhD thesis, Atanasoff became rather frustrated about the available mechanical calculation machines and began to search for more efficient methods of computation. In 1936 Atanasoff invented an analog calculator for analyzing surface geometry. The fine mechanical tolerance required for good accuracy pushed him to consider digital solutions. According to Atanasoff, several operative principles of his famous invention, the Atanasoff–Berry Computer (ABC), were conceived in a flash of insight during the winter of 1937–1938 after a drive to Rock Island, Illinois. One night in a bar on the Illinois-Iowa border, after another frustrating day performing tedious mathematical calculations in his lab, Atanasoff hit on the idea that the binary number system and electronic switches, combined with an array of capacitors on a moving drum to serve as memory, could yield a computing machine that would make his life as a scientist easier. With a grant of $650 received in September 1939 Atanasoff went back to his office and with the assistance of his graduate student Clifford Berry, he built the machine by November of that year. The prototype really worked and the whole world changed ever after. The key ideas employed in the ABC included binary math and Boolean logic to solve up to 29 simultaneous linear equations. The ABC had no central processing unit (CPU), but was designed as an electronic device using vacuum tubes for digital computation. It also used separate regenerative capacitor memory that operated by a process still used today in DRAM memory. 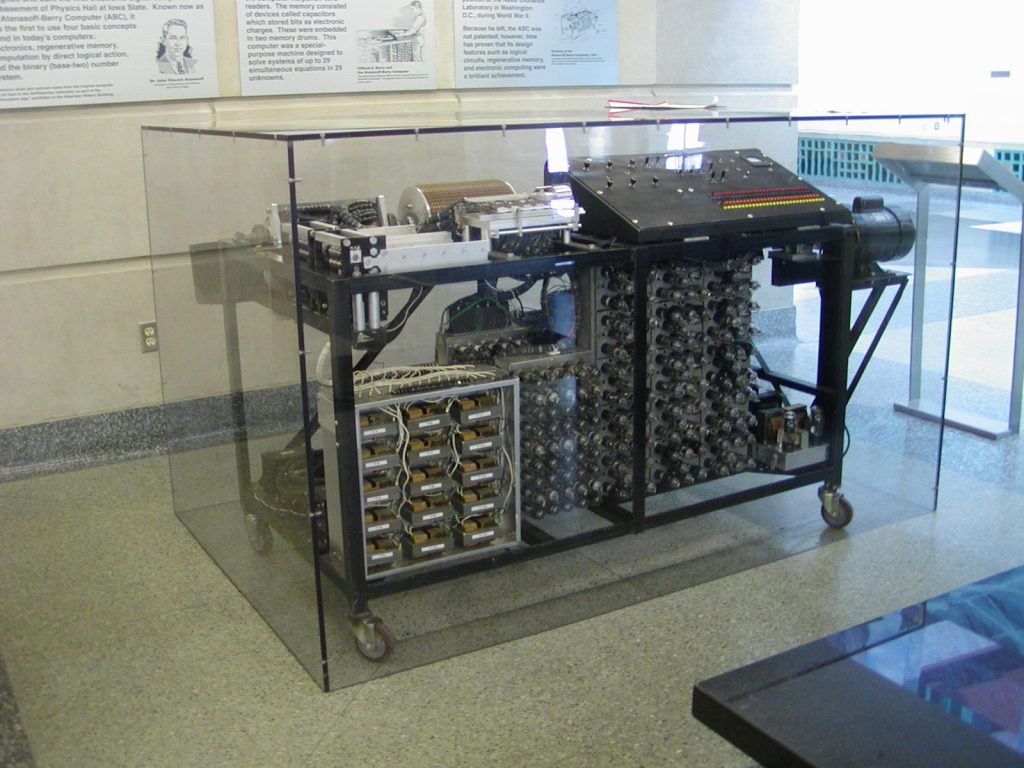 Replica of the Atanasoff-Berry computer in the Durham Center of Iowa State University, User:Manop [CC BY-SA 3.0]

Opening the Gates to the Computer Revolution

John Atanasoff met John Mauchly in December 1940 at a meeting of the American Association for the Advancement of Science in Philadelphia, where Mauchly presented his harmonic analyzer, an analog computer for analyzing weather data. Atanasoff told Mauchly about his new digital device and invited him to visit it. On their trip to Philadelphia, Atanasoff and Berry also visited the Washington, D.C. Patent Office, where their research convinced them that their concepts were novel. On January 15, 1941, the Iowa-based daily Des Moines Register reported that the ABC, “an electric calculating machine” with more than 300 electron tubes, could “solve complicated algebraic equations”.

In June 1941, Mauchly visited Atanasoff in Ames, Iowa, to visit the ABC. During his four-day visit as a guest at Atanasoff’s house, Mauchly thoroughly discussed the prototype ABC, examined it, and studied Atanasoff’s draft manuscript in detail. Until then, Mauchly had not yet submitted a plan of a digital computer. In September 1942, Atanasoff left Iowa State University to take up a position as head of the Acoustic Department at the Naval Ordnance Laboratory (NOL) in Washington D.C. He entrusted his patent application for the ABC to the administration of Iowa State College, which she never filed. Mauchly visited Atanasoff several times in Washington in 1943 and discussed his theories on calculations with him, but it was not until early 1944 that he mentioned that he was working on a computer project himself.

Between 1954 and 1973, Atanasoff was a witness in the legal actions brought by various parties to invalidate electronic computing patents issued to John Mauchly and J. Presper Eckert,[8,9] who had designed ENIAC, the first general purpose electronic digital computer, which went operational in 1946.  The patents were owned by computer manufacturer Sperry Rand. But in 1973 a court declared that the patent on the Sperry Rand UNIVAC device was invalid and declared Atanasoff the inventor of the electronic digital computer, opening the intellectual property gates to the computer revolution.

In 1945, the U.S. Navy also decided to build a mainframe computer on the recommendation of John von Neumann. Atanasoff was commissioned to manage the project and asked Mauchly for help formulating job descriptions for the necessary personnel. However, Atanasoff was also commissioned to design acoustic systems for nuclear test monitoring, and this was the priority. When he returned from the Bikini Atoll tests in July 1946, the Navy’s computer project was discontinued due to lack of progress, again on John von Neumann’s recommendation. After the Second World War, Atanasoff remained a government employee and developed specialized seismographs and microbarographs for the detection of explosions from greater distances. In 1952, he founded Ordnance Engineering Corporation, which he led and sold to Aerojet General Corporation in 1956, where he became President of the Atlantic Division.

In 1960, Atanasoff and his wife Alice retired to their farm on a hill in New Market, Maryland. In 1961, he founded another company, Cybernetics Incorporated, in Frederick, Maryland, which he ran for twenty years. In 1990, President George H. W. Bush awarded Atanasoff the United States National Medal of Technology, the highest U.S. award for technical achievement. Atanasoff died on June 15, 1995 of a stroke in his home after a prolonged illness.

John Atanasoff, The Forces That Led to the Atanasoff-Berry Electronic Computer, [11]