You are here: Home › explorer › The second Voyage of the HMS Beagle 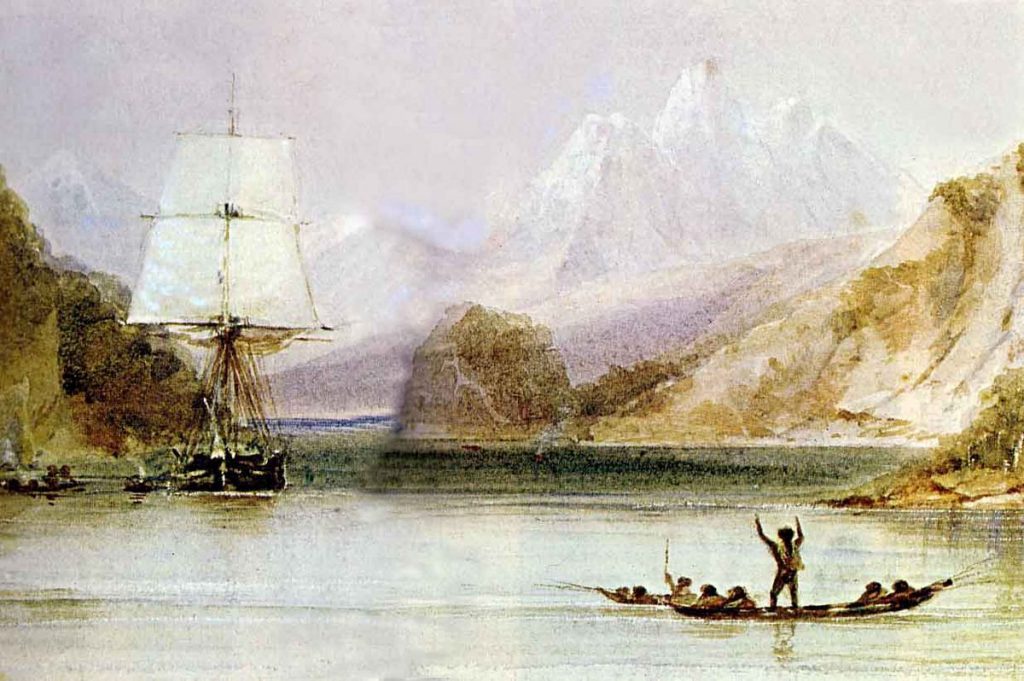 HMS Beagle in the seaways of Tierra del Fuego, painting by Conrad Martens

On December 27, 1831, the HMS. Beagle set sail from Plymouth Sound under captain Robert FitzRoy [4] with the young graduate Charles Darwin on board for her 5 years voyage. By the end of the expedition Charles Darwin had already made his name as a geologist and fossil collector, and the publication of his journal which became known as The Voyage of the Beagle gave him wide renown as a writer.[5,6]

The Cherokee-class of 10-gun brig-sloops was designed by Sir Henry Peake in 1807, and eventually over 100 were constructed. The Beagle’s keel was laid in June 1818, and the ship was launched on 11 May 1820. In July of that year she took part in a fleet review on the River Thames, celebrating the coronation of King George IV of the United Kingdom.

The First Voyage to South America

Captain Pringle Stokes was appointed captain of HMS Beagle on 7 September 1825 and led its first voyage, accompanying the larger ship HMS Adventure on a hydrographic survey of Patagonia and Tierra del Fuego, under the overall command of the Australian Captain Phillip Parker King, Commander and Surveyor. Unfortunately, Captain Stokes became severely depressed during the journey and shot himself. Captain Parker King then replaced Stokes with the First Lieutenant of the Beagle, Lieutenant W.G. Skyring as commander. In Montevideo, the ship was put under the command of Flag Lieutenant Robert Fitz Roy. During the journey, the only 23-year-old aristocrat FitzRoy proved an able commander and meticulous surveyor. During this survey, the Beagle Channel was identified and named after the ship.

The second voyage of the Beagle took place from 27 December 1831 to 2 October 1836. Its main purpose was to conduct a hydrographic survey of the coasts of the southern part of South America as a continuation and correction of the work of previous surveys, to produce nautical charts showing navigational and sea depth information for the navy and for commerce. On 27 June 1831 FitzRoy was commissioned as commander of the voyage, and Lieutenants John Clements Wickham and Bartholomew James Sulivan were appointed. The ship was one of the first to test the lightning conductor invented by William Snow Harris. FitzRoy obtained five examples of the Sympiesometer, a kind of mercury-free barometer patented by Alexander Adie and favoured by FitzRoy as giving the accurate readings required by the Admiralty.

FitzRoy was fully aware of the stress he would probably face during the journey as this was the first time, he had no commanding officer or second captain to consult. He felt the need for a gentleman companion who shared his scientific interests and could dine with him as an equal. The first person who was suggested to FitzRoy was Reverend Leonard Jenyns, however, he declined in the last minute. Soon, the 22-year-old Charles Darwin who had just completed the ordinary Bachelor of Arts degree which was a prerequisite for his intended career as a parson, and was on a geology field trip with Adam Sedgwick was suggested. However, this time FitzRoy responded to be strongly against Darwin joining the expedition. Still, Darwin traveled to London and was able to persuade FitzRoy. The geologist Charles Lyell asked FitzRoy to record observations on geological features such as erratic boulders.[7] Before they left England, FitzRoy gave Darwin a copy of the first volume of Lyell’s Principles of Geology which explained features as the outcome of a gradual process taking place over extremely long periods of time.

From Plymouth Sound to South America

On the morning of 27 December, the Beagle left its anchorage in the Barn Pool, under Mount Edgecumbe on the west side of Plymouth Sound and set out on its surveying expedition. On 6 January the expedition reached Tenerife in the Canary Islands, but was quarantined there because of cholera in England and they were denied landing. Their first landing turned out to be at Porto Praya on the volcanic island of St. Jago in the Cape Verde Islands. There, Darwin’s description in his published Journal begins. Darwin had a special position as guest and social equal of the captain, so junior officers called him “sir” until the captain dubbed Darwin Philos for ship’s philosopher, and this became his suitably respectful nickname.

In South America, Beagle carried out its survey work going along the coasts to allow careful measurement and rechecking. Darwin made long journeys inland with travelling companions from the locality. He spent much of the time away from the ship, returning by prearrangement when the Beagle returned to ports where mail could be received and Darwin’s notes, journals, and collections sent back to England. The crew reached the Galápagos Islands on 15 September 1835. He was disappointed that he did not see active volcanoes or find strata showing uplift as he had hoped, though one of the officers found broken oyster-shells high above the sea on one of the islands. Darwin industriously collected all the animals, plants, insects and reptiles, and speculated about finding “from future comparison to what district or ‘centre of creation’ the organized beings of this archipelago must be attached.“ 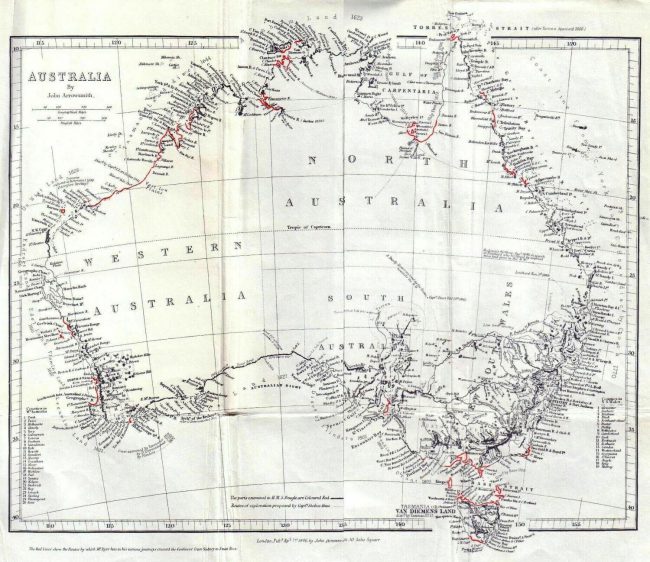 1846 “General Chart of Australia”, showing coasts examined by Beagle during the third voyage in red, from John Lort Stokes’ Discoveries in Australia

The expedition sailed on, dining on Galapagos tortoises, and passed the atoll of Honden Island on 9 November. They passed through the Low Islands archipelago, with Darwin remarking that they had “a very uninteresting appearance; a long brilliantly white beach is capped by a low bright line of green vegetation.” At Tahiti, Darwin found interest in luxuriant vegetation and the pleasant intelligent natives who showed the benefits of Christianity, refuting allegations he had read about tyrannical missionaries overturning indigenous cultures. They reached New Zealand in December and Australia in January 1836. They made contact with a group of aborigines who looked “good-humoured & pleasant & they appeared far from such utterly degraded beings as usually represented”. They gave him a display of spear throwing for a shilling, and he reflected sadly on how their numbers were rapidly decreasing. 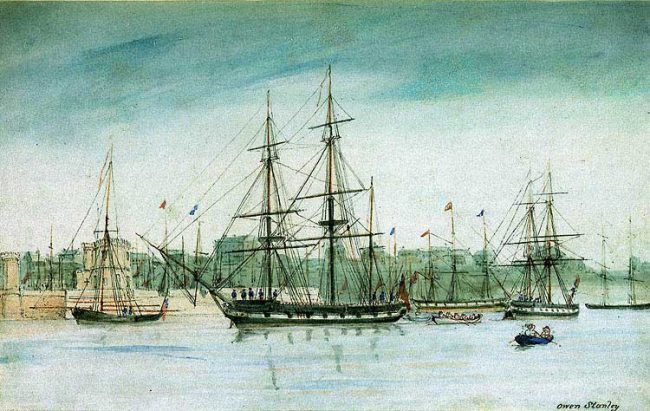 In 1837 HMS Beagle set off on a survey of Australia, and is shown here in an 1841 watercolour by Captain Owen Stanley of Beagle’s sister ship HMS Britomart.

From the Indian Ocean back to England

On April 1, the crew arrived at Keeling Islands in the Indian Ocean, where Darwin found a coconut economy. At Mauritius, Darwin toured the island, examining its volcanic mountains and fringing coral reefs. Around 15 June Darwin and FitzRoy visited the noted astronomer Sir John Herschel. In his diary Darwin called this “the most memorable event which, for a long period, I have had the good fortune to enjoy.” On 23 July they set off again longing to reach home, but FitzRoy wanted to ensure the accuracy of his longitude measurements and so took the ship across the Atlantic back to Bahia in Brazil to take check readings. The Beagle departed for home on 17 August. After a stormy passage including a stop for supplies at the Azores, the Beagle finally reached Falmouth, Cornwall, England on 2 October 1836.

Back home, Darwin set to work reorganising and trimming his diary, and incorporating scientific material from his notes. He completed his Journal and Remarks (now commonly known as The Voyage of the Beagle) in August 1837, but FitzRoy was slower and the three volumes were published in August 1839. Darwin had shown great ability as a collector and had done the best he could with the reference books he had on ship. It was now the province of recognised expert specialists to establish which specimens were unknown, and make their considered taxonomic decisions on defining and naming new species.