You are here: Home › aviation › Hugo Junkers and the all-metal monoplane

On February 3, 1859, German engineer and aircraft designer Hugo Junkers was born. Junkers is generally credited with pioneering the design of all-metal airplanes and flying wings. As founder of the Junkers Flugzeug- und Motorenwerke AG, he was one of the mainstays of the German aircraft industry in the years between World War I and World War II. Amongst the highlight of his career were the Junkers J 1 of 1915, the world’s first practical all-metal aircraft, incorporating a cantilever wing design with virtually no external bracing, the Junkers F 13 of 1919, the world’s first all-metal passenger aircraft.

Hugo Junkers came from a wealthy family that offered him and his siblings very good educational opportunities and financial independence. He was the third of seven children of the entrepreneur and owner of a cotton weaving mill Heinrich Junkers and his wife Luise. After attending the Höhere Bürgerschule (today: Hugo-Junkers-Gymnasium) in Rheydt from 1864 to 1875, he then moved to the Gewerbeschule in Barmen, where he graduated from high school in 1878. After an internship at the machine tool factory Karl Klingelhoefer, Junkers began studying at the Royal Vocational School in Berlin in September of the same year, which merged with theRoyal Polytechnic University in Charlottenburg in 1879. After two semesters he continued his studies from October 1881 at the Technical University in Aachen, where he graduated in 1883 with an examination in mechanical engineering.

After initial professional experience in various companies in Aachen and in his father’s company in Rheydt, for which he also temporarily interrupted his studies, Junkers went back to the Charlottenburg University of Technology to attend further lectures on electrodynamics and thermodynamics with Adolf Slaby and to carry out mechanical tests in his electrotechnical laboratory. In 1888, at Slaby’s suggestion, Junkers went to Dessau to join the German Continental Gas Company, which had started producing electricity two years earlier and had also developed corresponding engines. Together with the Technical Director, Wilhelm von Oechelhäuser jun., Junkers developed new engines; both succeeded in 1892 in developing the first two-stroke opposed-piston gas engine.

The Calorimeter and Further Developments

Since knowledge of the calorific value of the gas used is decisive for the mode of operation of the engine, Junkers simultaneously developed a calorimeter, which was registered for patent on 29 June 1892. In October of the same year, Hugo Junkers founded his first company, Hugo Junkers, civil engineer, and began work in a horse stable rented by the gas company.  The calorimeter, which measures the temperature difference of the heated water, was presented to the general public at the 1893 World’s Fair in Chicago, where it was awarded a gold medal. Junkers himself stayed in the USA and presented the device together with Paul Sachsenberg from the Sachsenberg-Werke in Roßlau.

Using the same technical principle, Junkers applied for a patent for its first gas bath furnace in 1894 and further developed it into a continuous-flow heater. For the economic evaluation of his patents, Junkers founded the Junkers & Co. company together with Paul Ludwig as investor on July 2, 1895 and one year later moved into a newly constructed factory building in Albrechtstrasse in Dessau. Calorimeters, household appliances (“Junkers thermal baths”) and gas pressure regulators were manufactured there. As early as 1897, Junkers also accepted a professorship in thermodynamics at the Technical University of Aachen after he had paid out his partner Ludwig. 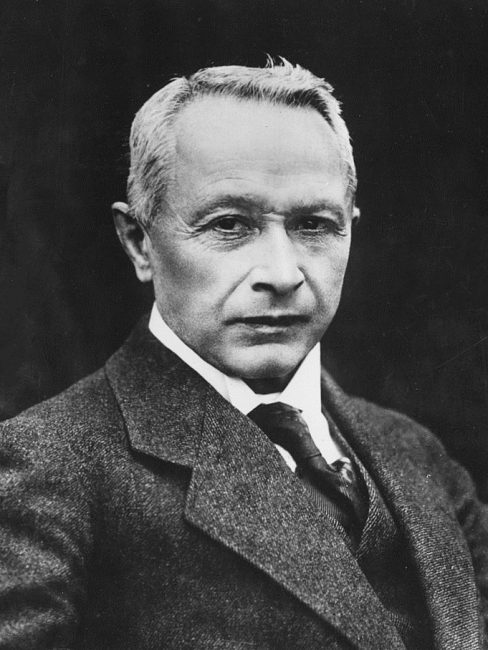 It is believed that Junker first began with his aeronautical work when he collaborated with Hans Reissner in Aachen. They started to construct their all-metal canard design, which they named the Ente (“Duck“). Junkers & Co built the flying surfaces as well as the radiator of Reissner’s design. While working on the project, Junkers began working on the problems of airframe design and solving the problem of eliminating the then-prevalent exterior bracing from airframes. In 1910, Junkers applied for a patent for the cantilever, unbraced wing with a thick profile, his first patent in aircraft construction, which became a trend-setter for all aviation technology. At the initiative of Junkers, a wind tunnel was also built in Aachen in 1910. Almost incidentally, Junkers designed the first water vortex brake around this time. In 1912 Junkers returned to Dessau and the following year opened an engine factory in Magdeburg; it was closed again in 1915.

In 1915, Junker and his company received the first aircraft construction contract from the German government to produce a two-seat all-metal aircraft with a top speed of 130 km/h. Otto Mader was back then the head of Junkers’ Forschungsanstalt and Hans Steudel was director of the company’s structural materials and testing department. They began working on the design of the Junkers J 1 in 1915 and in November of the same year, the initial test flights began. Junkers engineers Otto Mader, head of Junkers’ Forschungsanstalt, and Hans Steudel, director of Junkers’ structural materials and testing department, started the work on the design of what would become the Junkers J 1 in September of that year, and by November 1915, the completed J 1 was ready for initial flight testing.

The J 1 was a mid-wing monoplane with a cantilever wing. The fuselage used welded strip-steel angle stock and I-beam sections along with some steel tubing to form its main internal structure with 42cm wide sheet steel panels wrapped around the fuselage to form its covering. The wing root had a depth of about 75% of the height of the fuselage at the root’s thickest point, and the wing had at least three airfoil changes, along with tapering of the leading and trailing edge angles between the wing’s root and the wingtip which became Junkers design hallmark on the later 1918 Junkers D.I. single seat all metal fighter design. On the J 1, Junker also relied on steel panels with span-wise corrugations running from root to tip as a structural element hidden under the smooth outer metal covering to increase the wing’s strength. These elements were later used on all-metal aircraft, such as the wings of the American Boeing B-17 Flying Fortress heavy bomber design of 1935.

The static tests on the airplane were completed on 3 December 1915 and it was taken to the airfield in Döberitz near Berlin for its flight testing program. After the first test flight was not so successful and some repairs were accomplished over the holidays. On 18 January 1916, the second attempt at flight for the J 1 was carried out successfully. Junkers was given a contract to continue working on his all-metal concept. The Junkers J 2 single-seat fighter, which was the follow-on to the J 1, never saw front line service. The J 1 probably never flew after January 1916.

From 1917 to 1919 the company merged with Fokker to form Junkers-Fokkerwerke AG. During the First World War this company was an important armaments company, but only a few aircraft developed there became ready for the front. After World War I started, Junker had became more and more convinced of the necessity to use metal as the main structural material for airplanes. However, the apparently best metal alloy for aircraft construction, duralumin, had only been invented some six years earlier in Germany, Junkers’ first all-metal aircraft designs had to use sheets of heavier electrical steel. Junker’s efforts after the First World War up to his retirement in 1933 were mainly focused on civil aviation, which he advanced and shaped as an aircraft and engine manufacturer as well as an air carrier. The Junkers F 13, the G 38 and the Ju 52/3m became famous. Junkers competed with Dornier for the better concept for long-distance flights across the Atlantic (see also Atlantic Crossing).[6] Junkers favoured land planes; Dornier seaplanes. The much younger Dornier (1884-1969) offered Junkers a cooperation; Junkers declined.[5]

After Junkers Motorenbau GmbH, which Hugo Junkers had newly founded in Dessau in 1923, had already got into financial difficulties at the beginning of 1930 against the backdrop of the global economic crisis, Junkers had to file for insolvency for its entire group of companies on 22 March 1932. Shortly after the Nazi regime took power on 30 January 1933, Junkers-Motorenbau GmbH and Junkers-Flugzeugwerk AG became the objects of the new “Reichskommissar für Luftfahrt” (Reich Commissioner for Aviation), Hermann Göring, whose employment Junkers had rejected ten years earlier. Put under great pressure, Hugo Junkers had to hand over the majority of the remaining company to the German Reich in 1933. Junkers was banned from the house and the city and had to leave Dessau. Hugo Junkers died on 3 February 1935 at age 76.

In 1936 the companies were merged to form Junkers Flugzeug- und Motorenwerke AG. The aircraft that were later used in the war from 1939 onwards – such as the Ju 87 or Ju 88 – were built under state control; with their smooth fuselage construction they had nothing in common with the design that Junkers had coined and cannot be attributed to him.