You are here: Home › philosophy › Christian Wolff and the German Enlightenment 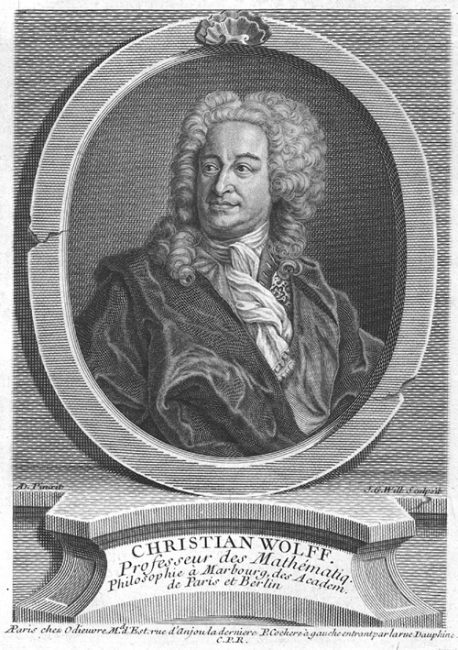 On January 24, 1679, German philosopher Christian Wolff was born. One of the most important philosophers of the Enlightenment between Leibniz and Kant, he is one of the most important representatives of natural law and is regarded as the actual founder of 19th-century jurisprudence on concepts. German philosophy owes its terminological foundation to him; many of the terms he defined, such as consciousness, meaning, or attention, were later adopted into everyday language.

“Ein Mensch ist verbunden, dem anderen mit seinem Vermögen, seiner Arbeit, seiner Hülfe und seinem Exempel vielfältig zu dienen.”
(A person is connected to serve the other person with his ability, his work, his help and his example in many ways.)
– Christian Wolff

Christian Wolff, the son of a tanner, was born in Breslau, today’s Wrocław in Poland, a Silesian city with a  biconfessional (both Lutheran-Protestant and Catholic) character, then under Austrian administration. At the age of eight Christian Wolff, himself a Lutheran, came to the Maria Magdalenen Gymnasium in Wroclaw. According to his own statements he also followed the Catholic services and discussed philosophical and theological questions with the Wroclaw Jesuit pupils. To his father, who attended the Elizabethanum in Wroclaw up to the Prima, but then took up the above-mentioned trade because of his poverty, he owed a careful education and early instruction, which he himself showed great eagerness to learn. The headmaster of the grammar school at that time was Christian Gryphius, a son of the baroque poet Andreas Gryphius from Glogau. One of his most important teachers was Caspar Neumann, who strongly influenced his career, not only because of his thoroughness, but also because of his sermons, which, according to the inclination of the time, were dogmatic in character, and because of his admonition to philosophy.[1] From 1699 Wolff studied theology in Jena, but above all physics and mathematics.

Wolff went to Leipzig in 1702, first for his Master’s examination, then, after another one-year stay in Jena, for his habilitation on the basis of his treatise “De philosophia practica universali methodo mathematica conscripta“, which earned him not only collaboration on Mencke’s acta eruditorum, but also the applause of Leibniz, which was followed since 1704 by an extremely beneficial exchange of letters. [4] Leibniz soon initiated him into the doctrine of preestabilized harmony and the calculus of fluxes, and warned him against the opinion assumed by Tschirnhausen that syllogism was not a means of finding the truth, even with the success, certainly not intended by Leibniz, that W. in his later systematic works established syllogism as the most distinguished source of knowledge. In Halle, he was persuaded by Hoffmann and Stryck to remain at that university as a teacher of mathematics which had not been represented since the death of Jakob Spener. With the support of Leibniz, Wolff finally was appointed professor of mathematics and natural sciences in Halle on November 2, 1706.

In 1710 Christian Wolff was appointed a member of the Royal Society and in 1711 of the Berlin Academy of Sciences . In the same year Wolff encountered the classics of Chinese philosophy in the Latin translation by Flemish missionary François Noël (1651-1729). The intensive reading of the works of Confucius and Mencius inspired Wolff to give his “Speech on the practical philosophy of the Chinese (de Sinarum philosophia practica)” at the University of Halle in 1721. In this speech, Confucius and the Confucian tradition served as living proof of an ethics which, independent of the Christian faith, had shaped a high culture for thousands of years. On 12 July 1723 Wolff held a lecture for students and the magistrates at the end of his term as a rector. Wolff compared, based on books by François Noël (1651–1729) and Philippe Couplet (1623–1693), Moses, Christ and Mohammed with Confucius. According to Voltaire, Lutheran theologian and professor August Hermann Francke had been teaching in an empty classroom but Wolff attracted with his lectures around 1,000 students from all over. In the following up Wolff was accused by Francke of fatalism and atheism; his opponents caused him to resign from his office in 1723 and to leave the city of Halle within 48 hours by order of the Prussian King Friedrich Wilhelm I into banishment. But Wolff studied the Chinese classics in the translation of Noël until his death in 1754, and his entire work is permeated with quotations and allusions to this reading, which can be regarded as testimony to the most fruitful encounter between Western and Chinese philosophy.

Honors and Return to Halle

“Es ist freilich wahr, dass es in keinem gemeinen Wesen besser hergehen würde, als wo alles mit Vernunft geschähe, das ist, wo jedermann in allen vor kommenden Fällen zureichenden Verstand und genug Tugend hätte.”
(It is true, of course, that in no mean being would things go better than where everything would be done with reason, that is, where everyone would have sufficient reason and enough virtue in all cases to come.)
– Christian Wolff

After his banishment, Wolff went to Hesse where he taught at the University of Marburg with great success until 1740. One of his students was Johann Adam von Ickstatt, another Mikhail Lomonosov,[4] whose name is now the Lomonosov University in Moscow. The Empress Catherine I  of Russia appointed him a member of the St. Petersburg Academy, and he also became a foreign member of the Académie des sciences in Paris. Frederick II of Prussia called him back to Halle in 1740, in 1743 he became chancellor at the university there, and two years later he was ennobled by the Duke and Elector of Bavaria, Maximilian Joseph, in his function as imperial vicar to become baron of the empire. His entry into the town on the 6th of December 1740 partook of the nature of a triumphal procession. But his matter was no longer fresh, he had outlived his power of attracting students, and his class-rooms remained empty.[7]

Wolff’s philosophy is a systematic manifestation of rationalism, drawing on various sources, Leibniz, Descartes, the scholasticism of Thomas Aquinas and Francisco Suarez. For a long time, Wolff was primarily ascribed the “systematization” of Gottfried Wilhelm Leibniz’s philosophy, although differences between Wolff and Leibniz, for example in monadology, should not be overlooked. These differences were already emphasized by Wolff himself and have been increasingly brought out by more recent research. The mathematical teaching method propagated by Wolff and his followers aimed at a strict systematic approach when writing a text. In the best case, each individual thought should therefore appear with a corresponding explicitly defined sentence category. With this method, also known as “demonstrative”, an optimal comprehensibility of the train of thought should be achieved.

Ontology according to Wolff

Wolff had philosophy divided into a theoretical and a practical part. Logic, sometimes called philosophia rationalis, forms the introduction or propaedeutics to both. Theoretical philosophy had for its parts ontology or philosophia prima as a general metaphysics, which arises as a preliminary to the distinction of the three special metaphysics on the soul, world and God: rational psychology, rational cosmology, and rational theology. The three disciplines are called empirical and rational because they are independent of revelation. This scheme, which is the counterpart of religious tripartition in creature, creation, and Creator, is best known to philosophical students by Kant’s treatment of it in the Critique of Pure Reason. Practical philosophy is subdivided into ethics, economics and politics. Wolff’s moral principle is the realization of human perfection—seen realistically as the kind of perfection the human person actually can achieve in the world in which we live. It is perhaps the combination of Enlightenment optimism and worldly realism that made Wolff so successful and popular as a teacher of future statesmen and business leaders

Wolff died in Halle on 9 April 1754, the whereabouts of his grave have not been completely clarified to this day. His school, the Wolffians, was the first school, in the philosophical sense, associated with a German philosopher. It dominated Germany until the rise of Kantianism.[8]

If you are interested in ontology, you might watch a recording of a lecture from my 2014 OpenHPI Mooc “Semantic Technologies” with the title “Ontology as Central Concept of Philosophy“.[12]