You are here: Home › literature › Andreas Gryphius – Master Poet of the German Baroque 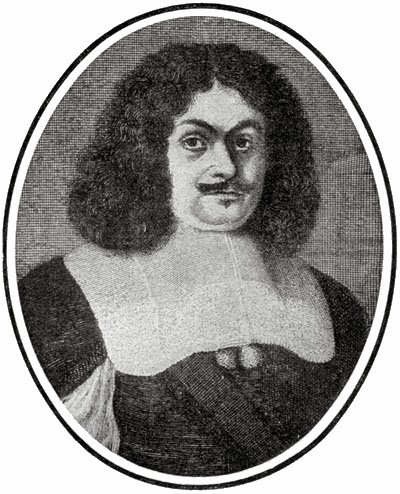 On October 11, 1616, German Baroque lyric poet and dramatist Andreas Gryphius was born. For his poems and tragedies Gryphius chose the topics of pain and moral decay during the times of the Thirty Years’ War as well as human restlessness, solitude and inner conflicts. Unless you have attended a German highschool or have a strong interest in baroque poetry, you might have never heard of him. Back at school, we had to learn some of Gryphus’ poems by heart – besides of interpreting his works again and again. Thus, parts of his poetry have become part of my life and therefore, I decided to introduce Gryphius and his work also to the readers of our daily history blog.

Andreas Gryphius was born on October 11, 1616, in Großglogau, Silesia, which is today Poland, as the youngest son of the Protestant archdeacon, Paul Gryphius. Actually, his German family name was ‘Greif’. But, following the prevailing fashion, he latinized it to Gryphius. Gryphius was born right at the beginning of the Thirty Year’s war, which should influence him as a major topic of his poetry throughout his entire life. This war involved almost every country in Central Europe. It was one of the longest and most destructive conflicts in European history, and one of the longest continuous wars in modern history. It was fought largely as a religious war between Protestants and Catholics. A major consequence of the Thirty Years’ War was the devastation of entire regions, denuded by the foraging armies. Famine and disease significantly decreased the population of the German states, Bohemia, the Low Countries, and Italy; most of the combatant powers were bankrupted. In these troubled times, Andreas Gryphius grew up, left early an orphan and driven from his native town by the war. He received his schooling in various places, but notably at Görlitz and Fraustadt, where he enjoyed an excellent classical education.

In 1632, Gryphius had witnessed the pillaging and burning of the Silesian town of Freystadt by Swedish troops, and immortalized the event in his poem Fewrige Freystadt in 1637. His first publications included Latin poetry, Herodis Furiae, et Rachelis lachrymae (1634), and his first collection of German sonnets (1637). From 1634 until 1636, he studied at the Academic Gymnasium in Danzig (present-day Gdansk, Poland), where he met professors Peter Crüger and Johann Mochinger, who introduced Gryphius to the new German language poetry. Crüger had for years close contacts to Martin Opitz, who is referred to as ‘father of German poetry‘. In Gdansk a second Latin Herod epic, dedicated to the Gdansk councillors, and the Parnassus Renovatus, dedicated to his later patron Schönborner, were written; in addition, Gryphius probably already wrote some of the sonnets that were printed in 1637 in the Polish Lissa.

In 1636 Gryphius became tutor to the sons of the eminent jurist Georg von Schönborner, a man of wide culture and considerable wealth, who had been rewarded by the emperor Ferdinand II. with the title and office of imperial count-palatine (Hofpfalzgraf). Schönborner, who recognized Gryphius’s genius, crowned him poeta laureatus, gave him the diploma of master of philosophy, and bestowed on. him a patent of nobility, though Gryphius never used the title. The two-year stay on the estate of the well-known lawyer and former imperial official was probably not always free of tension due to the hypochondriac and paranoid personality structure of the landlord, but Gryphius found a retreat and an opportunity for self-study in the rich library. He described the devastating fire of Freystadt in the night from 8 to 9 July 1637 in the longest German-language prose volume ever written by him, which was published in the winter of 1637 under the title Fewrige Freystadt. With this report, which was based on his own and other eyewitnesses’ observations, Gryphius made many enemies because he not only realistically described Freystadt’s war situation, but also criticized the failure of the municipal authorities in fighting the fire. In 1638, after the death of his patron he accompanied Schönborner’s two sons on their knight tour through the Netherlands to the prestigious university in Leiden, where from 1638 to 1644 he studied a wide range of subjects and also gave lectures. He traveled on his own to Den Haag, Paris, Marseille, Florence, Rome, Venice, and Strassbourg in 1644.

The German baroque literature was driven by two opposite currents, heavily influenced by the dramatic events of the Thirty Year’s War: embracement of life and the vanitas mundi. This Latin word means “vanity” and loosely translated corresponds to the meaninglessness of earthly life and the transient nature of all earthly goods and pursuits. A master of the sonnet form, Gryphius wrote predominantly sombre poetry, embodying Christian reflections on the vanity and brevity of human life and earthly values.

Finally, Gryphius settled in 1647 at Fraustadt, where he began his dramatic work. After an absence of nine years it was certainly not easy for Gryphius to gain a foothold in Silesia again. In a sonnet he laments the death of numerous friends and acquaintances. The following two years were extremely productive in literary terms. He wrote the tragedies Cardenio and Celinde and Carolus Stuardus and the comedies Peter Squentz and Horribilicribrifax. All these pieces appeared in print years later, the Trauerspiele in the authorized Complete Edition of 1657. A revised and modified version of Carolus Stuardus appeared in 1663, after Gryphius had learned new facts about the fate of Charles Stuart. Calls to various universities (Frankfurt/Oder, Heidelberg, Uppsala) he rejected. Gryphius married Rosina Deutschländer in Fraustadt 1649 and in 1650 became secretary to or legal representative of the estates (Landessyndikus) in the principality of Glogau, a position he held until his death. Duke William IV of Sachsen-Weimar inducted him into the Fruitbearing Society in 1662, where he was referred to as “der Unsterbliche” (the immortal).

On 16 July 1664 Andreas Gryphius suffered a fatal stroke during a meeting of the Glogau estates.

One of my favourite poems of Gryphius is ‘Es ist alles eitel‘ (The Vanity of This World).

The Vanity of This World

Look anywhere you will, the Earth is empty show.
What someone builds today, another soon tears down;
Where now a city stands will be a grassy mound,
A place that only shepherds grazing their flocks will know.

What blooms so fair at daybreak, by noon is trampled low;
What bravely struts and strives soon turns to ash and bone;
No substance lasts forever, no brass, no polished stone.
One moment fortune smiles, the next brings bitter woe.

Tales of our mighty deeds like dreams must fade away.
How then should Man—Time’s plaything—ever hope to stay?
Oh think, what are those objects we prize beyond compare,

Mere shadows, dust, and wind—all worthless, false and vain;
Field flowers glimpsed in passing and never seen again!
For that which is immortal, no man seems to care.