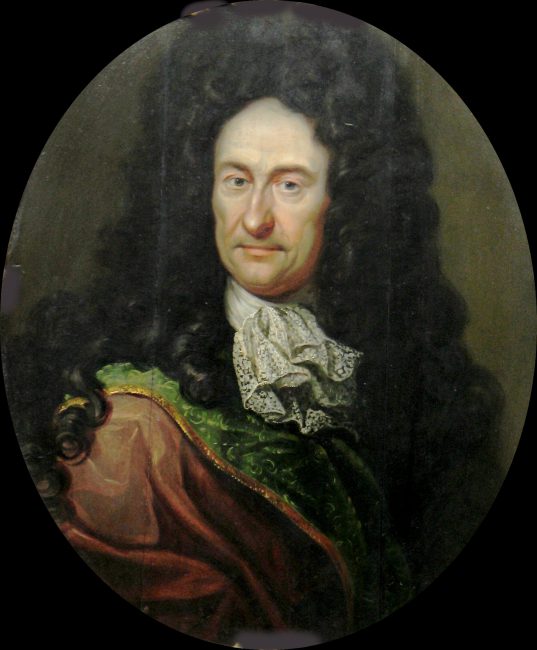 On July 1, 1646, one of the last universally interdisciplinary academics, active in the fields of mathematics, physics, history, politics, philosophy, and librarianship was born. Gottfried Wilhelm Leibniz counts as one of the most influential scientists of the late 17th and early 18th century and impersonates a meaningful representative of the Age of Enlightenment. Moreover, I even have a personal relationship with him since he is also the namesake of the association to which the institute I am working for is a member of, the Leibniz Association (Leibniz Gemeinschaft).

“There is no desert, nothing infertile, nothing dead in the world; no chaos, no confusion, except for an apparent one; about how it would seem to rule in a pond if one were to see from some distance a confused movement and, so to speak, a swarm of fish, without distinguishing the fish themselves”.
– Gottfried Wilhelm Leibniz

Leibniz was born in Leipzig on 21 June 1646 according to the Julian calendar valid at that time in the Protestant territories of the Holy Roman Empire, and was baptized in the Nikolaikirche in Leipzig on 23 June. His father, the legal scholar Friedrich Leibnütz (1597-1652), was a lawyer, notary and professor of moral philosophy (ethics) and his mother Catharina was the daughter of the Leipzig professor and jurist Wilhelm Schmuck.Leibniz made up his interests concerning philosophy and law studies in his early years, following his father’s footsteps. He even decided to acquire Latin auto-didactically at the age of eight, which is impossible to imagine for today’s Latin students, who experience this language more as a constant torture. Leibniz attended the Nikolaischule in Leipzig from 1655 to 1661. In 1661 he enrolled at Leipzig University and studied philosophy with the theologian Johann Adam Schertzer and the philosophical theorist Jakob Thomasius. In 1663 he moved to the University of Jena, where he opened himself to Pythagorean thought under the guidance of the mathematician, physicist and astronomer Erhard Weigel. In 1666, still at the age of 19, Leibniz published his first book De Arte Combinatoria (On the Art of Combinatorics). With the first part of this book Disputatio arithmetica de complexionibus he was awarded a doctorate in philosophy by Jakob Thomasius and Erhard Weigel in March of that year.

A New Method to Teach and Study Jurisprudence

Later in the same year, at the age of 20, Leibniz wanted to obtain a doctorate in law, but the Leipzig professors rejected him as too young. So he went to Nuremberg to catch up at the University of Altdorf. He was able to establish a great reputation, working for archbishop Johann Phillip von Schönborn in the 1670‘s. During his time in Mainz he published his first work of great reception ‘Nova methodus discendae docendaeque jurisprudentiae‘, a new method to teach and study jurisprudence. In 1672 Leibniz travelled to Paris at his own request. There he wanted to submit a plan for a conquest campaign against Egypt to the “Sun King” Louis XIV in order to dissuade him from the planned wars of conquest in Europe. But Leibniz did not dare to hand over the plan; more than one hundred years later Napoleon Bonaparte implemented it in the Egyptian expedition. He also became a member of the British Royal Society due to his achievement of creating a calculating machine with a stepped reckoner. Another contribution to the field of mathematics was his (and Newton’s) development of infinitesimal calculus, revolutionary then and a basis of many calculations in mathematical, physical, stochastic and economical problems today. In philosophy, Leibniz became famous with the phrase of the ‘best of all possible worlds‘. It pictures the correlation between the good and the evil, meaning that the world has a huge potential of development and that even God cannot realize the good things on earth without a certain amount of the evil. 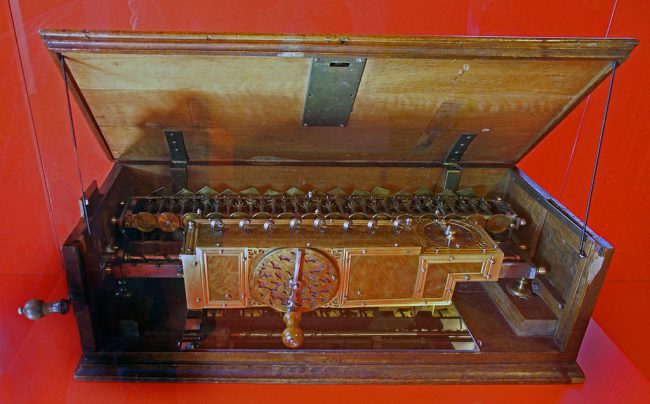 In 1700, after negotiations with the Brandenburg Elector Frederick III, later King Frederick I, plans for a Royal Prussian Academy of Sciences based on English and French models were implemented. With the support of Friedrich’s wife Sophie Charlotte, at whose court in Lietzenburg Castle Leibniz was a frequent guest, the Academy was founded in Berlin and Leibniz became its first president. To extend this success, he negotiated the foundation of a Saxon academy in Dresden in 1704. He founded a total of three academies, which are still in existence today: the Brandenburg Society of Sciences and the academies in Vienna and Saint Petersburg. 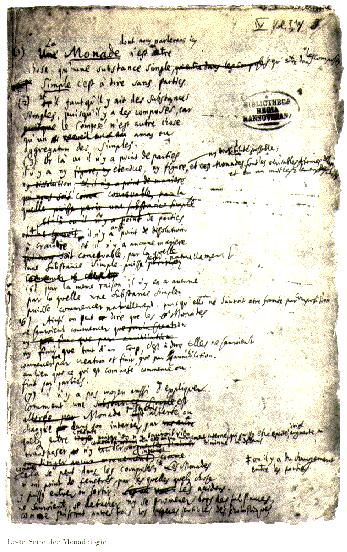 A page from Leibniz’s manuscript of the Monadology

Leibniz’s achievements are far too many to be mentioned all in one small blog post [1]. Thus we will focus only on a small episode. Especially interesting for computer scientists  like myself, Leibniz anticipated the use of formal logic for automated reasoning and decision making. Besides inventing the binary system, which is the basis of nowadays computers, Leibniz argued that if we would be able to find a formal (logic) language to express problems instead of our ambiguous natural language, we should be able to solve arguments simply performing a calculation. Let us calculate! (in Latin: Calculemus!) he requested, to solve every argument or dispute. He believed that much of human reasoning could be reduced to calculations of a sort, and that such calculations could resolve many differences of opinion:

“The only way to rectify our reasonings is to make them as tangible as those of the Mathematicians, so that we can find our error at a glance, and when there are disputes among persons, we can simply say: Let us calculate [calculemus], without further ado, to see who is right”
— Gottfried Wilhelm Leibniz in a letter to Philip Spener, The Art of Discovery 1685, Wiener 51

Leibniz‘s calculus ratiocinator, which resembles symbolic logic, can be viewed as a way of making such calculations feasible. Leibniz wrote memoranda that can now be read as groping attempts to get symbolic logic – and thus his calculus – off the ground. These writings remained unpublished until the appearance of a selection edited by C.I. Gerhardt (1859). L. Couturat published a selection in 1901; by this time the main developments of modern logic had been created by Charles Sanders Peirce [8] and by Gottlob Frege.[7]

Leibniz wrote about himself in French: “Sometimes in the morning so many thoughts come to my mind during an hour still lying in bed that I need the whole morning and sometimes the whole day and longer to put them clearly on paper“. He is part of the early Enlightenment and is often called the last universal scholar. He had a strong influence on the subsequent Enlighteners, classical German philosophy, German idealism, and Weimar classical literature. His discoveries in the natural sciences and his philosophical and historical writings are still consulted by scholars all over the world. He was the last great thinker to represent the pre-18th-century science of the manifold connection and analysis of connections. His achievements and contributions to the world’s development are numerous and therefore he was honored several times during his lifetime and has not been forgotten today. Since a big part of his scientific work is documented in letters, the collection of these papers have been inscribed on UNESCO‘s Memory of the World Register in 2007. Leibniz died alone on 14 November 1716 at the age of 70 in Hanover and was buried there in the Neustadt court and town church of St. Johannis.