On January 23, 1857, Croatian meteorologist and seismologist Andrija Mohorovičić was born. He is best known for the eponymous Mohorovičić discontinuity, i.e. the boundary between the Earth’s crust and mantle discovered by him – and is considered a founder of modern seismology.

Andrija Mohorovičić proved to be a talented student from early age. By the age of 15, he spoke English, French and Italian and learned German, Czech, Latin and Ancient Greek as well. He enrolled at the Faculty of Philosophy of the University of Prague and studies with prominent professors, such as Ernst Mach.  Afterwards, he was occupied as a teacher at the grammar school in Zagreb and in Osijek. He made systematic studies and both invented and constructed instruments to observe precipitation in Croatia and Slavonia. At a nautical school in Bakar near Rijeka, he was able to teach mathematics, physics and meteorology. Mohorovičić established a meteorological station and he maintained continuous meteorological observations. In his observations, he also included the movement of air and the cloud using the nephoscope, which he constructed.

Mohorovičić defended his dissertation “On the Observation of Clouds, and the Daily and Annual Cloud Period in Bakar” in 1893 and taught courses in geophysics and astronomy at the Faculty of Philosophy in Zagreb. The scientist and teacher also became a member of the Yugoslav Academy of Sciences and Arts in Zagreb. [1] On 13 March 1892, he observed the tornado in Novska, which picked up a 13-ton railway carriage with fifty passengers and threw it 30 m. He observed also the “vihor” (whirlwind) near Čazma in 1898 and studied the climate in Zagreb. Mohorovičić was the first person to describe atmospheric rotors with a horizontal axis, which he observed during bora-wind episodes in the northern Adriatic.

In 1891 he became a professor at the Technical Secondary School in Zagreb and director of the National Institute of Meteorology and Geodynamics. In 1892, he received his doctorate from the University of Zagreb with a meteorological thesis. 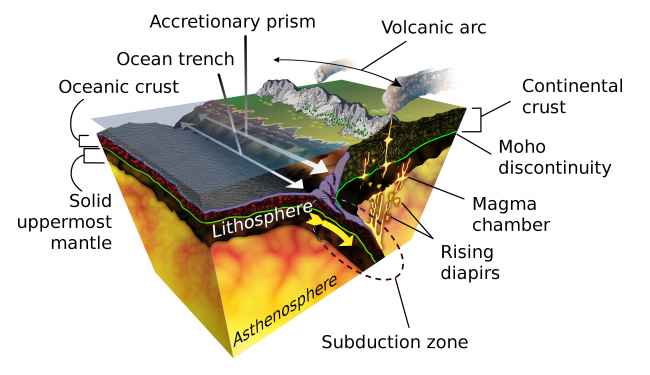 To one of Mohorovičić’s biggest contributions to science belogs the famous Mohorovičić Discontinuity, which was discovered around 1910 and it can be described as the boundary between the Earth’s crust and the mantle. Mohorovičić discovered from seismograms of the Pokupsko quake near Zagreb on October 8, 1909, that some P and S quake waves arrived later than expected. He realized that the velocity of a seismic wave is related to the density of the material that it is moving through and interpreted the acceleration of seismic waves within Earth’s outer shell as a compositional change within the Earth. Therefore, he concluded, must the acceleration be caused by a higher density material being present at a depth of about 54 km. Mohorovičić determined that the basaltic oceanic crust and the granitic continental crust are underlain by a material which has a density similar to an olivine-rich rock such as peridotite. [2] Later investigations confirmed this boundary as a worldwide phenomenon: at a depth of 30-50 km, the Earth’s mantle begins with a temperature around 600 °C. 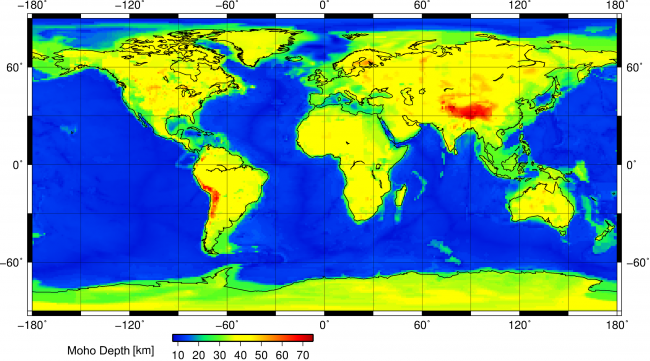 As shown in the figure, the Moho maintains a relatively stable average depth of 10 km under the ocean sea floor, but can vary by more than 70 km below continental land masses.

This interface was later called the Mohorovičić discontinuity and is now often abbreviated to “Moho” in the geosciences. Within the lithosphere, the Earth’s outer shell, this interface separates the Earth’s crust from the outer layer of the upper mantle. Mohorovičić’s theories were visionary and were only truly understood many years later from detailed observations of the effects of earthquakes on buildings, deep focus earthquakes, locating earthquake epicenters, Earth models, seismographs, harnessing the energy of the wind, hail defence and other related elements of the geological body of knowledge known as geoscience. Ten years after this culmination of his work as a seismologist, Mohorovičić retired in 1921. After his death on December 18, 1936, he was buried in the Mirogoj Cemetery in Zagreb.

Mohorovičić is the father of physicist and geophysicist Stjepan Mohorovičić (1890-1980), physics teacher at a school in Zagreb, still remembered today for predicting the existence of positronium in 1934 (in Astronomical News). He also predicted a Mohorovičić discontinuity on the Moon, which was also found by the measurements of the Apollo astronauts. In total, Andrija Mohorovičić had four sons.