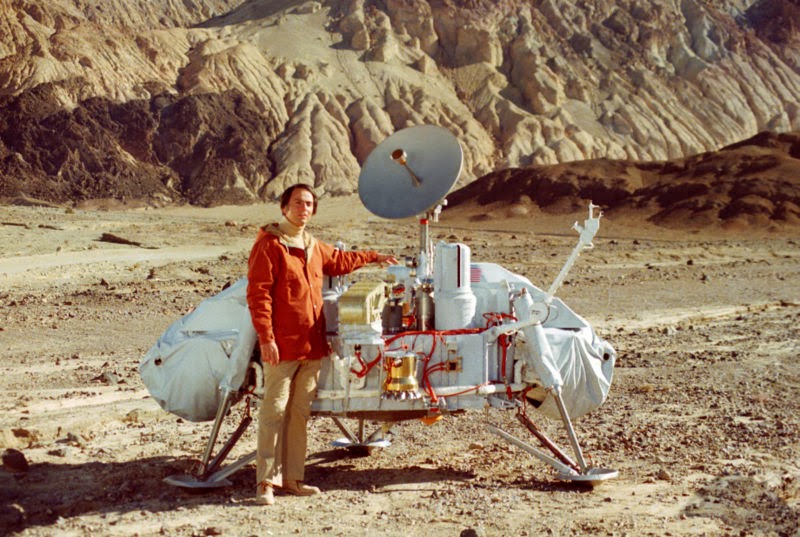 Carl Sagan with a model of the Viking lander Image: NASA

On November 9, 1934, American astronomer, astrophysicist, cosmologist, and successful author Carl Sagan was born. Carl Sagan is known for his popular science books and for the award-winning 1980 television series Cosmos: A Personal Voyage, which he narrated and co-wrote.

“In science it often happens that scientists say, “You know that’s a really good argument; my position is mistaken,” and then they would actually change their minds and you never hear that old view from them again. They really do it. It doesn’t happen as often as it should, because scientists are human and change is sometimes painful. But it happens every day. I cannot recall the last time something like that happened in politics or religion.” – Carl Sagan, 1987

Carl Sagan grew up in Brooklyn, New York and received his education in mainly public schools. Even though his parents were no scientists, they have influenced his later career dramatically. Taking him to the 1939 World’s Fair was one of these events that made Sagan become curious and ambitious. He began studying by himself at the public library at the age of five, wanting to learn the exact definition of stars. It troubled him, that no adult or friend could give him a good answer and he found out that

“the answer was stunning. It was that the Sun was a star but really close. The stars were suns, but so far away they were just little points of light … The scale of the universe suddenly opened up to me. It was a kind of religious experience. There was a magnificence to it, a grandeur, a scale which has never left me“.

At age 16, Carl Sagan enrolled at the University of Chicago. During his time as an honors program undergraduate, Sagan worked in the laboratory of the geneticist H. J. Muller and wrote a thesis on the origins of life with physical chemist Harold Urey.[5] He received bis B.A. in 1954, his B. Sc. in physics in 1955. He went on to earn a M.S. degree in physics in 1956, before earning a Ph.D. degree in 1960 with his thesis Physical Studies of Planets under astronomer Gerard Peter Kuiper.[4] From 1963 to 1968, Sagan was assistant professor at Harvard university and was working for the Smithsonian Astrophysical Observatory in Cambridge, Massachusetts. In 1968, Sagan was denied tenure at Harvard. There upon, he moved to Ithaca, New York to become a professor at Cornell University, where he stayed until his death in 1996.

Next to his teaching career, Sagan worked as an advisor to NASA, where has contributed to most of the unmanned space missions that have explored our solar system. One of his tasks there was to instruct the Apollo astronauts before flying to the Moon. When contributing to the robotic spacecraft missions, Sagan got the idea to add a message on spacecraft destined to leave the Solar System that could potentially be understood by any extraterrestrial intelligence that might find it. The first message was attached to space probe Pioneer 10, launched in 1972. Another was attached to the Voyager space probes in 1977.[6] 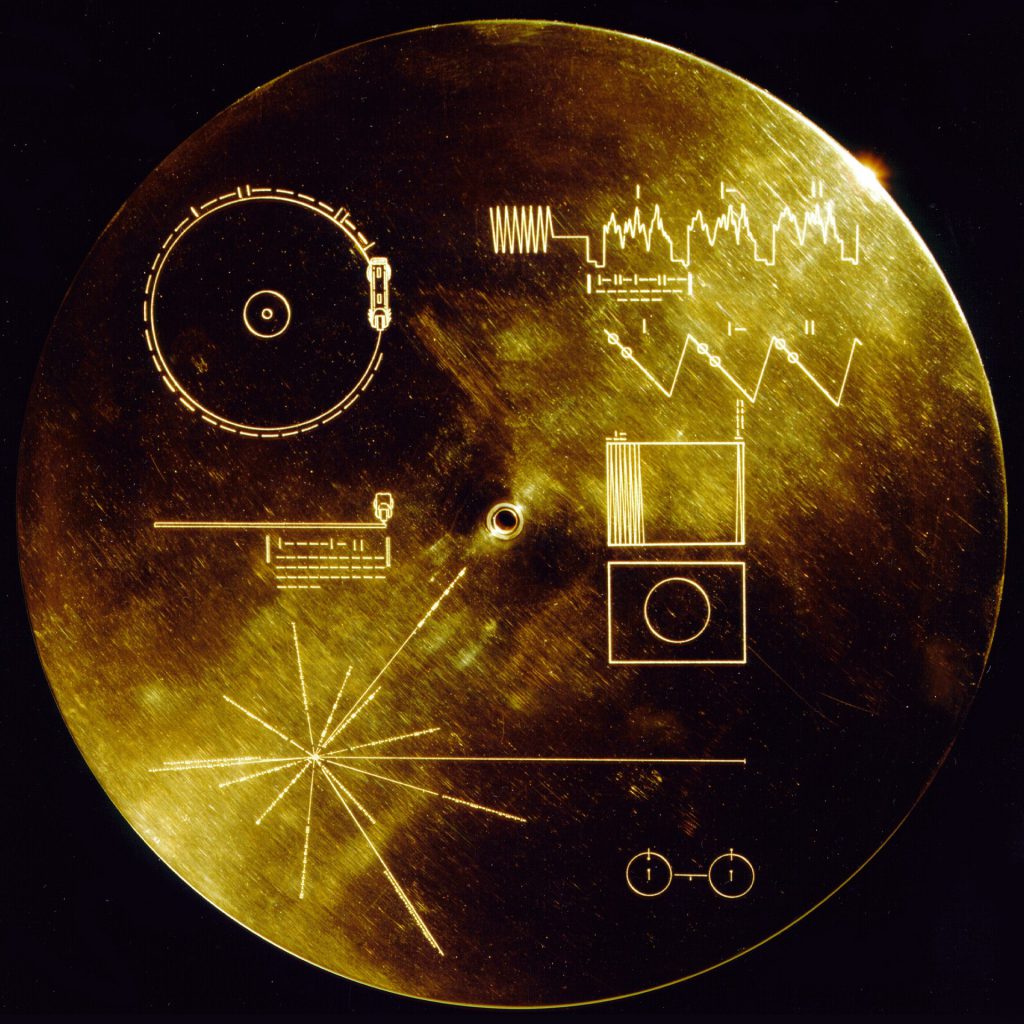 Voyager Golden Record – cover with interstellar instructions for use

In the 1960’s, it was not clear what the basic conditions on planet Venus were. Carl Sagan made significant contributions to discovering the surface’s temperature. Also he assumed that Venus was very dry and hot as he investigated radio emissions from the planet. Mariner 2 later confirmed these conclusions. Furthermore, Sagan was one of the first scientists to assume that Jupiter’s moon Europa might possess subsurface oceans of water, which would make the moon possibly habitable and was confirmed by spacecraft Galileo.[7]

Sagan did further work on the conditions of the planets in our solar system, but to his fields of highest interests belonged research on the possibilities of extraterrestrial life. Along with Ann Druyan, Sagan produced and wrote the tv-series ‘Cosmos‘, which covered widely ranged scientific subjects like the origins of human life and mankind’s place in the universe. The series became very popular and was broadcasted in over 60 counties. But all of those activities did not keep him from searching for extraterrestrial life and he set up a community that listened with radio telescopes for signals from potential intelligent extraterrestrial life-forms. Sagan was able to increase the respectability to this quite controversial field of research.

“Every kid starts out as a natural-born scientist, and then we beat it out of them. A few trickle through the system with their wonder and enthusiasm for science intact.”
– PT Staff (01 January 1996), “Carl Sagan, author interview”, Psychology Today

Sagan was a founding member of the Committee for the Scientific Investigation of Claims of the Paranormal (CSICOP), a member of the Skeptics Society, co-founder and first president of the Planetary Society, chairman of the Division of Planetary Sciences of the American Astronomical Society, president of the Department of Planetology of the American Geophysical Union, chairman of the Department of Astronomy of the American Association for the Advancement of Science, and for twelve years editor of the journal Icarus, a magazine for planetary research. In the 1960s, Carl Sagan was a member of a United States Air Force advisory board evaluating the Project Blue Book. Sagan also wrote popular science books such as The Dragons of Eden, for which he was awarded the Pulitzer Prize for Non-Fiction in 1978, and the novel Contact, adapted in 1997 with Jodie Foster in the film Contact. The “paradox of the weak young sun” and a first interpretation of it goes back to Sagan. He pointed out essential questions of the climate and peculiarities of the emergence of life on earth. Sagan was also involved in the Arecibo message sent on 16 November 1974 to the globular cluster M13, about 25,000 light years away from Earth.