You are here: Home › space › Galileo and the Exploration of the Jovian System 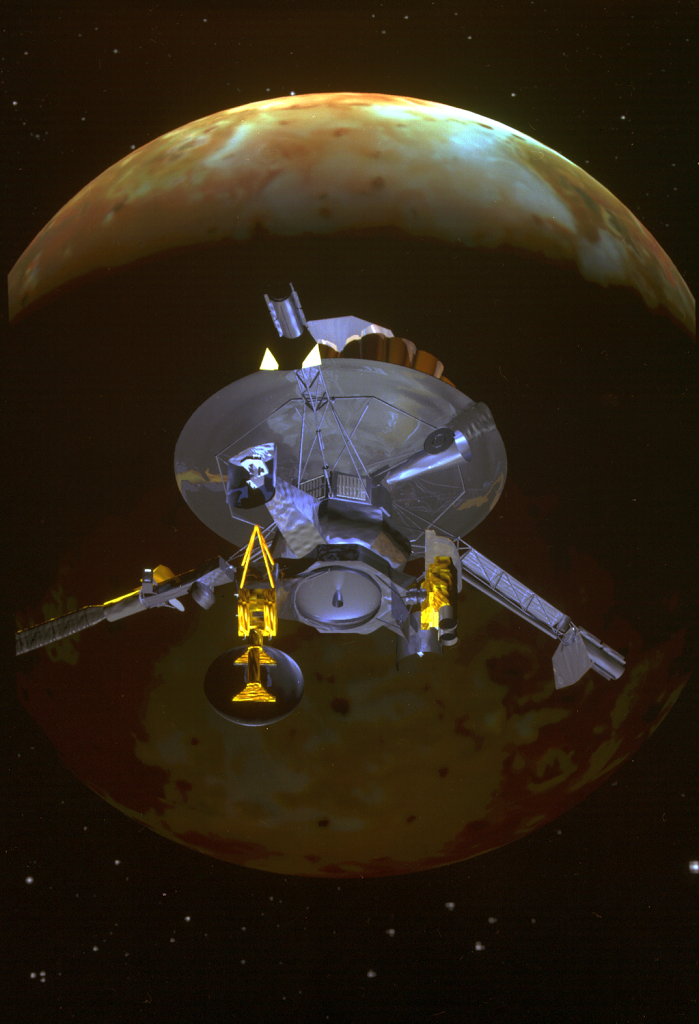 On October 18, 1989, the unmanned NASA spacecraft Galileo was launched on her mission to study the planet Jupiter and its moons. Named after the astronomer Galileo Galilei, it consisted of an orbiter and entry probe, which descended into Jupiter‘s atmosphere.

It was Galileo Galilei,[4] who connected us to the skies in 1609, when he demonstrated the improved instrument “for seeing things far away as if they were nearby” by Hans Lippershey – the telescope.[5] In this period, scientists began dreaming of observing the stars and planets more detailed and more target-oriented than ever. Jupiter was among the first objects in the nightly sky that Galileo observed. On January 7, 1610, Galileo wrote a letter containing the first mention of Jupiter’s moons. At the time, he saw only three of them, and he believed them to be fixed stars near Jupiter. He continued to observe these celestial orbs from January 8 to March 2, 1610. In these observations, he discovered a fourth body, and also observed that the four were not fixed stars, but rather were orbiting Jupiter.[4] The Galilean moons (or Galilean satellites) are the four largest moons of Jupiter — Io, Europa, Ganymede, and Callisto. They were the first objects found to orbit another planet. Only a few centuries after, mankind began traveling into space as Jules Verne in 1865 already predicted.[8] After the first successful moon landing in 1969, scientists needed further goals even farther away to explore the universe and its origins. It was worth it traveling to Jupiter for more than six years and even more years of development and construction efforts in order to gather better information. The spacecraft Galileo was supposed to collect the most detailed data on Jupiter, its moons and the many active volcanos and icy terrains on them. 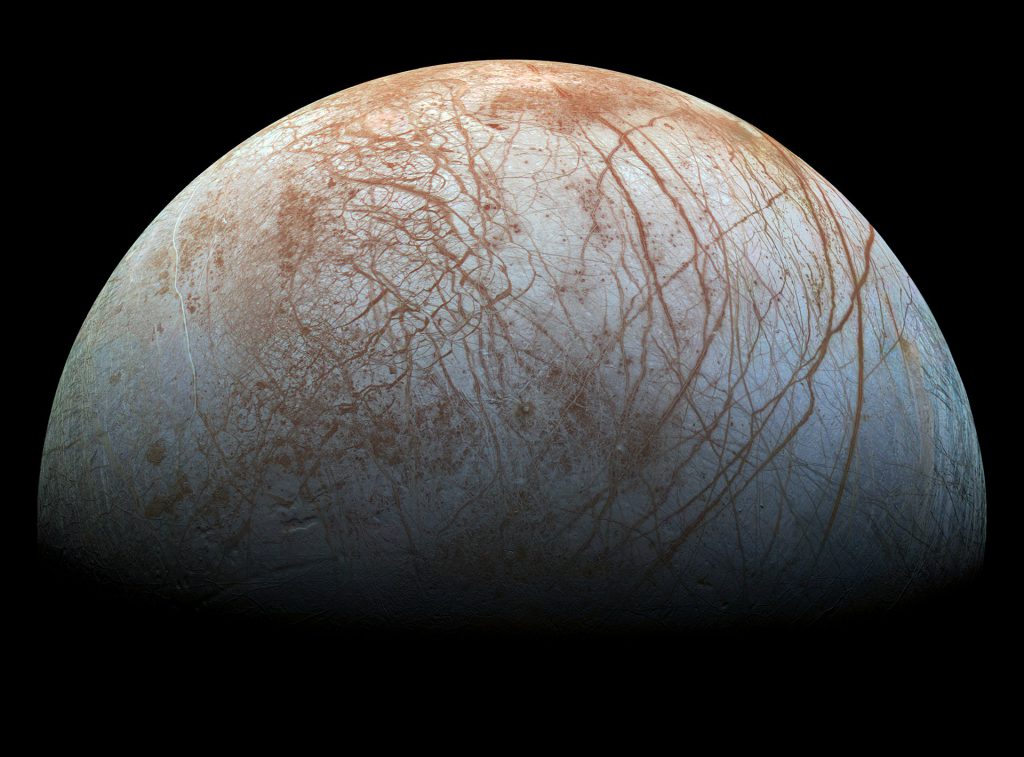 Exploration of the Galilean Moopns

The first spacecraft to visit Jupiter were Pioneer 10 in 1973, and Pioneer 11 a year later, taking low-resolution images of the four Galilean moons. The Voyager 1 and Voyager 2 probes visited Jupiter in 1979, discovering the volcanic activity on Io and the presence of water ice on the surface of Europa. The Cassini probe to Saturn flew by Jupiter in 2000 and collected data on interactions of the Galilean moons with Jupiter’s extended atmosphere. The New Horizons spacecraft flew by Jupiter in 2007 and made improved measurements of its satellites’ orbital parameters.

Work on the spacecraft Galileo began already in 1977 just before Voyager 1 and 2 were about to launch. Galileo’s mission was originally named Jupiter Orbiter Probe and was scheduled to launch in 1984.[10] According to initial plans dating back to 1977, Galileo was to be launched as early as January 1981. Various delays in the original launch vehicle Space Shuttle, financing uncertainties and finally the Challenger disaster led to several years of delay and changes in the probe and the flight path. Originally, Galileo was to be launched into space with the cancelled STS-61-G mission in May 1986. On 18 October 1989, however, the time had finally come. The space shuttle Atlantis brought Galileo into orbit with the STS-34 mission, where it was abandoned.

During its flight, Galileo did not have enough power sources to get to Jupiter directly. The NASA “borrowed” energy through swing-by’s at Earth and Venus to slingshot the spacecraft to the distant Jupiter. In February 1990, Galileo flew past Venus at a distance of 16,000 km, passing Earth for the first time in early December of the same year and again two years later. Meanwhile, it was able to send spectacular images of both Venus and Earth to the ground station. On its way, Galileo took very detailed images of the asteroid belt, especially of asteroid Gaspra and in 1994, the spacecraft could perfectly “watch” Shoemaker-Levy 9’s crash into Jupiter and delivered the only images of the direct impact as Earth-based telescopes had to wait until they rotated into the right view.[9]

Exploration of the Jovian System

In July, 1995 the spacecraft’s probe was sent out to a solo flight, slicing into Jupiter’s atmosphere and releasing its parachute. Meanwhile, detailed weather data could be collected and it became clear that Jupiter’s atmosphere was a lot drier than expected. The probe recorded numerous thunderstorms with lightning strikes up to 1000 times more powerful than those on Earth. The spacecraft also investigated the four largest moons Ganymede, Callisto, Io and Europa and showed that especially Io has great volcanic activities. It was further found out that the volcanic eruptions were quite similar to those of Earth’s early days. There was evidence of a water ocean under the ice crust of Europe and of zones of liquid water in the cloaks of Ganymed and Kallisto and the volcanoes on Io. Both Io, which is constantly kneaded through by the tidal forces of Jupiter, and Ganymed, the largest moon in our solar system, have an iron core, and Ganymed surprisingly has a strong magnetic field. The data was then taken to explore conditions on Earth 3 billion years ago. During the mission, Galileo returned over 15,000 pictures and next to Gaspra, it managed to view another asteroid, Ida that even had its own moon called Dactyl. It was the first known moon of an asteroid.

The mission part at Jupiter was originally only planned for 23 months until December 1997, but was then extended a total of three times, as the equipment and propulsion were still functional and good results could be expected. The focus of the first two mission extensions was the moon Europe, while in the last part of the mission two fly-bys of Io inside the Jupiter system, which was controlled by dangerous radiation, were dared. On 21 September 2003, Galileo was directed into Jupiter’s atmosphere and burnt out there, as the probe would later no longer have been steerable due to a lack of fuel and electronic failures caused by the high radiation dose received from Jupiter in recent years. There was a danger that Galileo could crash onto the moon Europe and contaminate it with terrestrial microorganisms. This would have made future life-trace exploration missions on the Jupiter moons more difficult.