You are here: Home › astronomy › To Boldly Go Where No Man Has Gone Before – Voyager 2 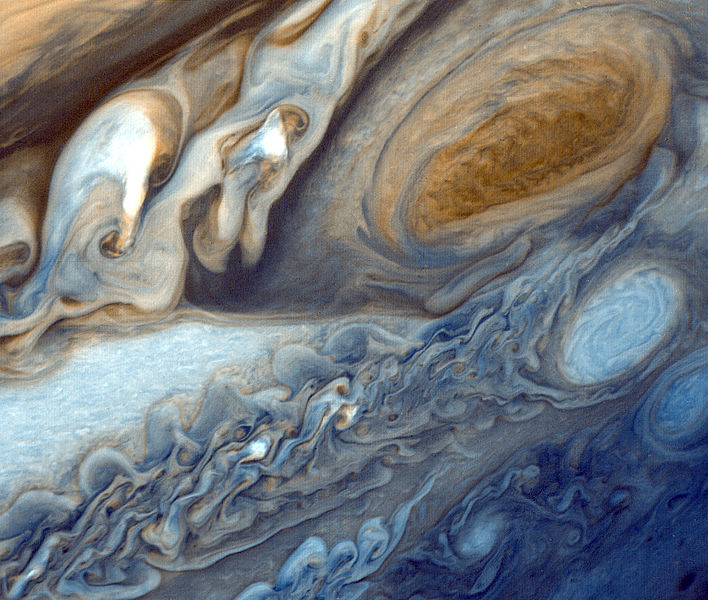 On July 9, 1979 the interplanetary spacecraft Voyager 2 passed Jupiter, the largest planet in the Solar System. The space probe had been launched by NASA on August 20, 1977 to study the outer Solar System and eventually to push forward into interstellar space. Until today,  operating for more than 30 years the spacecraft still receives routine commands and transmits data back to the Deep Space Network, a world-wide network of large antennas and communication facilities. Besides its passage of the Jovian system including Jupiter’s moons, the primary mission of Voyager 2 ended December 31, 1989 after encountering also the Saturnian system in 1980, the Uranian system in 1986, and the Neptunian system in 1989.

The Roots of the Voyager Program

The roots of the Voyager programme go back to the mid-1960s. There were calculations for trajectories for probes that could exploit the favorable positions of the outer planets at the end of the 1970s. In the early 1970s it was decided to build Voyager 1 and 2. Since they were only planned as an extension of the Mariner series, they were first described as “Mariner 11” and 12. This name was later dropped due to the large structural differences of the probes. The concept phase was completed by March 1975 and construction of the probes began.

Two weeks after the launch of Voyager 2, the twin Voyager 1 probe was launched on September 5, 1977. However, Voyager 1 would reach both Jupiter and Saturn sooner, as Voyager 2 had been launched into a longer, more circular trajectory through the Solar System.

The closest approach to Jupiter occurred on July 9, 1979. It came within 570,000 km of the planet’s cloud tops and discovered a few rings around Jupiter, as well as volcanic activity on Io, one of the moons. The Great Red Spot, a prominent oval-shaped feature in the southern hemisphere of Jupiter already observed with telescopes in the 17th century, was revealed as a complex storm moving in a counterclockwise direction. Discovery of active volcanism on Io was easily the greatest unexpected discovery at Jupiter. It was the first time active volcanoes had been seen on another body in the Solar System. 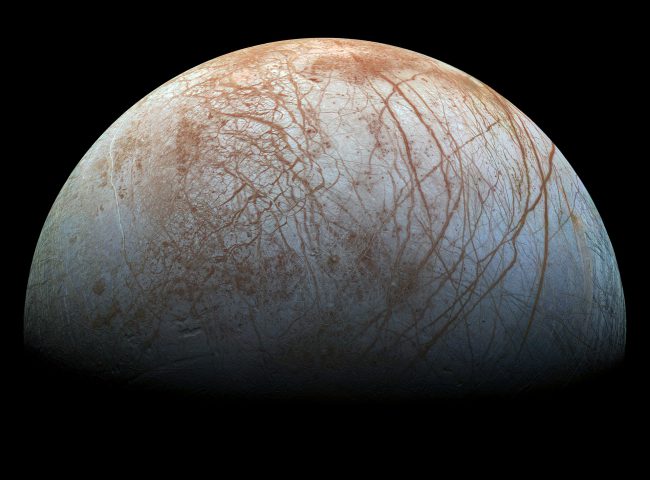 The Moons of Jupiter

The moon Europa displayed a large number of intersecting linear features in the low-resolution photos from Voyager 1. At first, scientists believed the features might be deep cracks, caused by crustal rifting or tectonic processes. The closer high-resolution photos from Voyager 2, however, left scientists puzzled: The features were so lacking in topographic relief that as one scientist described them, they “might have been painted on with a felt marker.” Europa is internally active due to tidal heating at a level about one-tenth that of Io. Two new, small satellites of Jupiter, Adrastea and Metis, also were found orbiting just outside the ring. A third new satellite, Thebe, was discovered between the orbits of Amalthea and Io. When Voyager 2 left the Jupiter system on August 5, she had sent 13,350 images to Earth and passed the planet at a distance of 643,000 km. The swing-by manoeuvre accelerated the probe to 16 km/s and it was now on its way to Saturn.

The Exploration of Saturn

The exploration of Saturn showed its very high wind speeds, especially near the equator, where Voyager could measure 2 speeds of up to 500 meters per second. These mainly blow in eastern direction, become slower with increasing latitudes and from 35° north/south the direction turns to west. Voyager 2 also found a very strong symmetry of wind conditions between the northern and southern parts of Saturn, which some scientists interpreted as an indication of currents through the interior of the planet. Already in spring 1981 the first correction manoeuvres were carried out to bring Voyager 2 to Uranus. This was not originally planned, as the probe would already be on the road for 8 years upon arrival. This corresponded to twice the forecasted or projected service life. Internal studies showed only a 65% chance that Voyager 2 would reach Uranus.

On November 4, 1985, Voyager 2 began her observations of Uranus. Before the passage of the planet ten smaller ones were discovered in addition to the five Uranus moons known until then: Puck, Juliet, Portia, Cressida, Desdemona, Rosalind, Belinda, Cordelia, Ophelia and Bianca. The moon Perdita was not discovered until 13 years later on the images of the probe and was finally confirmed by the IAU in 2003. On June 6, 1989, the active Neptune phase of the probe began, 80 days before the fly-by. Intensive observation of the Neptune system then began two months later, on August 6, 20 days before the fly-by. This took place on 26 August at a distance of 4828 km. The observation phase ended on October 2, 1989, after more than 9000 images had been transmitted.

The mission of Voyager 2 is considered one of NASA’s greatest successes and space travel in general. It is also the third most man-made object on earth (after its sister probe and Pioneer 10). On July 10, 2018, Voyager 2 is approximately 117.98 astronomical units (AE) away from the Sun, which is approximately 17.65 billion kilometers. It is still transmitting scientific data at about 160 bits per second and will continue transmitting weak radio messages until at least 2025, over 48 years since it was launched. Since the Neptune Passage, Voyager 2, like its sister probe Voyager 1, has been on its way into the outer regions of the solar system and beyond. The aim of the Voyager Interstellar Mission (VIM) is to explore the fringe areas of the solar system and the surrounding interstellar space. Voyager 2 moves at a speed of 3.3 astronomical units per year on an orbit of 48° (south) to the ecliptic.