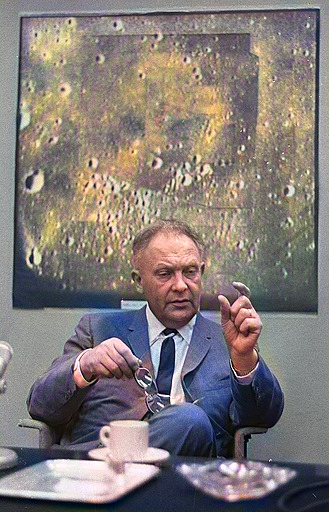 On December 7, 1905, Dutch-American astronomer Gerard Peter Kuiper was born. Considered by many to be the father of modern planetary science, Kuiper is the eponymous namesake of the Kuiper belt, a region of the Solar System beyond the planets, extending from the orbit of Neptune (at 30 AU) to approximately 50 AU from the Sun. Kuiper also discovered Miranda, a moon of Uranus, and Nereid, a moon of Neptune.

“The Kuiper Belt is the largest mapped structure in our planetary system, three times as big as all the territory from the sun out to Neptune’s orbit.”
– Alan Stern, [12]

Gerard Kuiper was the oldest of four children. His parents were Gerrit Kuiper, a trained tailor, and Antje de Vries. Kuiper is believed to have had an extraordinarily sharp eyesight which allowed him to see magnitude 7.5 star with the naked eye, about four times fainter than visible to normal eyes. Kuiper studied at Leiden University starting from 1924 and befriended his fellow students Bart Bok and Pieter Oosterhoff. Further, Kuiper studied under Ejnar Hertzsprung,[3] Antonie Pannekoek, Willem de Sitter, Jan Woltjer, Jan Oort [4] and the physicist Paul Ehrenfest. He earned his B.Sc. in Astronomy in 1927 and continued straight on with his graduate studies.

Kuiper took part in an eight-month expedition to Sumatra in 1929. Kuiper finished his doctoral thesis “Statistical investigations of binary stars” with Hertzsprung in 1933, after which he traveled to California to become a fellow under Robert Grant Aitken at the Lick Observatory.[5] Kuiper left to work at the Harvard College Observatory where he met Sarah Parker Fuller, whom he married on June 20, 1936. He then took a position at the Yerkes Observatory of the University of Chicago and became an American citizen in 1937.

Planetary Research in the Solar System

Gerard Kuiper’s research was focused mainly on the solar system. He discovered two natural satellites of planets in the Solar System, namely Uranus‘s satellite Miranda and Neptune’s satellite Nereid. Further, Kuiper discovered carbon dioxide in the atmosphere of Mars and the existence of a methane-laced atmosphere above Saturn‘s satellite Titan in 1944. Kuiper also pioneered airborne infrared observing using a Convair 990 aircraft in the 1960s. In 1958, the two worked on the classified military Project A119, the secret Air Force plan to detonate a nuclear warhead on the Moon. He also worked theoretically on questions of the origin of the solar system and predicted the Kuiper belt named after him.

The Kuiper Belt is a ring-shaped, relatively flat region that extends in the Solar System outside the Neptune orbit at a distance of about 30 to 50 Astronomical Units (AUs) near the ecliptic and is estimated to contain more than 70,000 objects more than 100 km in diameter and many smaller objects. While many asteroids are composed primarily of rock and metal, most Kuiper belt objects are composed largely of frozen volatiles (termed “ices”), such as methane, ammonia and water. The Kuiper belt is home to three officially recognized dwarf planets: Pluto,[6] Haumea and Makemake. Some of the Solar System’s moons, such as Neptune’s Triton and Saturn’s Phoebe, may have originated in the region. The Kuiper belt is distinct from the theoretical Oort cloud, which is a thousand times more distant and is mostly spherical. After the discovery of Pluto in 1930, many speculated that it might not be alone. The region now called the Kuiper belt was hypothesized in various forms for decades. It was only in 1992 that the first direct evidence for its existence was found.

The number and variety of prior speculations on the nature of the Kuiper belt have led to continued uncertainty as to who deserves credit for first proposing it. In 1951, in a paper in Astrophysics: A Topical Symposium, Gerard Kuiper speculated on a disc having formed early in the Solar System’s evolution, but he did not think that such a belt still existed today. Kuiper was operating on the assumption, common in his time, that Pluto was the size of Earth and had therefore scattered these bodies out toward the Oort cloud or out of the Solar System. Were Kuiper’s hypothesis correct, there would not be a Kuiper belt today.

In the 1950s Kuiper’s interdisciplinary collaboration with the geochemist and Nobel Laureate Harold C. Urey to understand the Moon’s thermal evolution descended into acrimony, as the two engaged in what became known as the “Hot Moon Cold Moon” controversy.[7] Their falling out, in part a scientific dispute, also reflected the challenge of maintaining professional relationships across overlapping but distinct scientific disciplines. In 1960 to found the Lunar and Planetary Laboratory at the University of Arizona. Kuiper was the laboratory‘s director until his death in 1973. Kuiper was also involved in the search for suitable landing sites for the Apollo programme by analysing images of the lunar probes in the 1960s as chief scientist of the NASA Ranger project.

Jane Luu, The Kuiper Belt and its implications, [11]