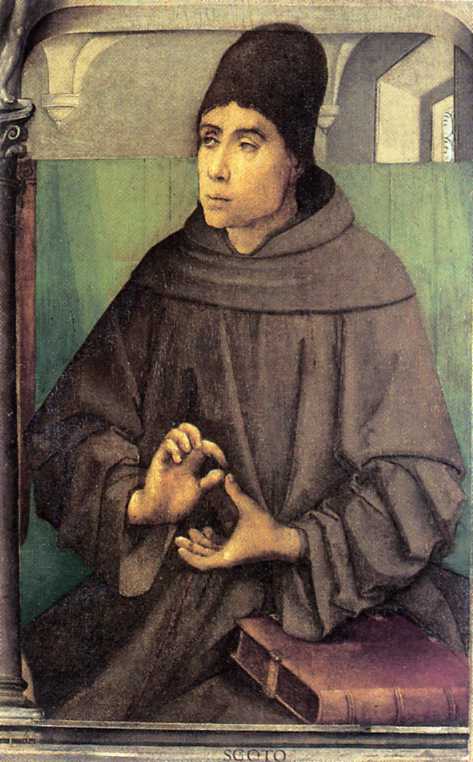 On November 8, 1308, Scottish Catholic priest and Franciscan friar, university professor, philosopher, and theologian John Duns aka Duns Scotus passed away. He is one of the three most important philosopher-theologians of Western Europe in the High Middle Ages, together with Thomas Aquinas [1] and William of Ockham.[2] Amongst others, he is best known for the “univocity of being”, that existence is the most abstract concept we have, applicable to everything that exists; the formal distinction, a way of distinguishing between different aspects of the same thing.

“As for the object of the science in this sense, we have indicated above that this science is about the transcendentals. And it was shown to be about the highest causes. But there are various opinions about which of these ought to be considered its proper object or subject.”
– John Duns Scotus, Quaestiones subtilissimae de metaphysicam Aristotelis

There is little documented information about the life of John Duns Scotus. He was named after his probable birthplace Duns in Scotland, near the English border at Berwick-upon-Tweed. Other records point to Maxton in Roxbourghshire as the place of birth. His exact date of birth is also unknown. The first certain date in his biography is the Franciscan ordination at Saint Andrews Monastery in Northampton on 17 March 1291. In determining his year of birth 1266, it is assumed that he was ordained at the age of 25, as early as possible in his day. A corresponding recalculation on the basis of the usual training periods shows that he entered the Franciscan Order around 1280, then studied philosophy for around 6 years, the seven liberal arts, and finally received his theological training in Oxford from 1288 to around 1293. There, as well as probably also in Cambridge, he taught as Baccalaureus and probably wrote a first commentary on the Sententia of Petrus Lombardus, the Lectura, in 1299, as well as a series of Aristotle comments until about 1300. In 1300 he was listed on a list of proposals for confessors in Oxford and demonstrably took part in a disputation there in the same year.

In the 13th century, Aristotle’s reception in philosophy dominated, especially since his writings had been completely translated from Arab sources around 1200. It was dominated by the Dominicans Albertus Magnus [7] and especially by Thomas Aquinas.[1] Thomas had harmoniously connected Aristotle’s philosophy with theology in order to be able to specify theological questions more precisely and to relate the answers more clearly to them. 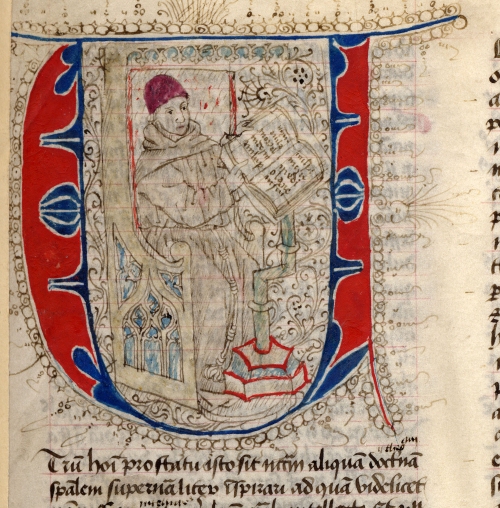 The “Quaestiones” by John Duns Scotus (manuscript of the XIV-XV century): decorated initial.

Taking Side for the Pope

In 1302 John Duns taught about the Sententia in Paris, at the university leading to his time. About his lectures there are various notes of students – reportationes or reportata Parisienses – which Scotus probably also checked in one case. In June 1303 he had to leave Paris, because he stood as one of about 80 monks on the side of Pope Boniface VIII by refusing the signature demanded by the French King Philip IV. The king demanded support for an appeal to a planned council because he wanted to tax the clergy, which the Pope strictly rejected. In April 1304 Scotus returned to Paris. On 17 November 1304 he was appointed Magister and in 1306 or 1307 Magister regens, i.e. professor of the Faculty of Theology of the Franciscans in Paris. A series of disputations and the third unfinished version of his commentaries on sentences, the Ordinatio, which is generally regarded as his main work, probably intended for publication, date from this period.

The Work of John Duns Scotus

“If all men by nature desire to know, then they desire most of all the greatest knowledge of science.”
– John Duns Scotus, Quaestiones subtilissimae de metaphysicam Aristotelis

Duns Scotus is regarded as one of the first representatives of late scholastics in which philosophy and theology gradually separated. He gave a decisive impetus to this. Because of his relatively early death, Scotus did not leave behind an ordered work, but a multitude of manuscripts for lectures, quaestions and disputations, of which only an incomplete text (the Ordinatio) was prepared for publication. The found writings were smoothed – following contemporary methods – by inserting supplementary notes or by omitting inconsistencies, not, as would be usual today, published text-critically with all marginal notes, deletions and brackets. In addition, student transcripts were used as a source for improvements and additions.

The first works date from around 1295 and, under the title Parva Logicalia, deal with Aristotle as a Quaestiones to the categories, to De Interpretatione and to the Sophist Refutations. The Quaestions to the Isagoge of Porphyrius are also from this period. It is not completely clear whether the Quaestiones super De Anima really belong to Scotus. The important writing Quaestiones subtilissimae de metaphysicam Aristotelis was written by Scotus over a longer period of time. The most important writing is the Ordinatio, on which Scotus worked over a long period of time and which was probably intended for publication. It contains passages from the Lectura, but also content that is consistent with the Paris Lectures. This text in particular is difficult to reconstruct due to supplementary notes. The handwritten original has been lost.

The Teachings of Scotus

The teaching of Scotus is often presented as a critical contrast to Thomas Aquinas in order to highlight Scotus’s new train of thought. But Scotus did not pursue school education, but always analyzed the existing philosophical traditions with the intention of gaining an improved, higher knowledge. He assessed the relationship between philosophy and theology differently from Thomas. While the latter regarded both as complementary disciplines, Scotus taught their clear distinction. Truths accepted by philosophy can therefore be wrong in theology. Philosophy has boundaries that transcend God’s revelation. The subject of metaphysics can therefore not be God, but only the existing. As with Aristotle and Thomas, knowledge begins with the sensual perception of objects. In addition, for Scotus the immaterial mind (intellectus) was an independent partial cause of the cognitive faculty. Both work together like father and mother in the procreation of the child. According to Scotus, however, man does not only recognize the object as such, but he also grasps what is essentially contained in it. The mind is not limited to purely material circumstances, but searches for principles that go beyond matter and form, act and potency. Knowledge is thus not limited to the agreement of object and thought (adaequatio rei et intellectus). A reduction to the purely material is not possible.

Even if Scotus did not write a summa, but rather dealt primarily with the detailed (subtle) analysis and elaboration of individual topics and the commentary of existing texts, one can nevertheless regard his teaching as a closed concept, ranging from knowledge to metaphysics to ethics, which is based on Aristotle and Avicenna, but with regard to the meaning of will and revelation ties in with the Franciscan-Augustine tradition.

Arthur F. Holmes, A History of Philosophy | 27 Duns Scotus and William of Ockham [8]