You are here: Home › art › Metropolis – A Cinematic Vision of Technology and Fear 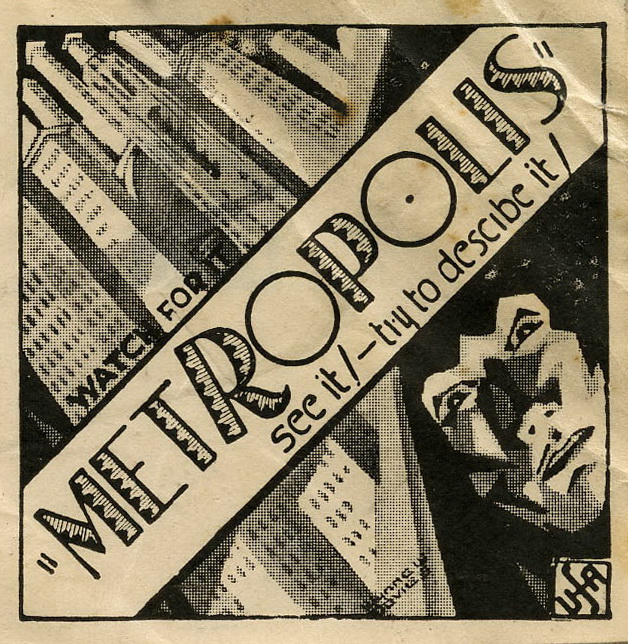 Advertisement for the film Metropolis (1927) by Fritz Lang

On January 10 1927 German expressionist epic science-fiction film Metropolis directed by Fritz Lang  premiered in Berlin. Metropolis is regarded as a pioneer work of science fiction movies, being the first feature length movie of the genre and one of the most expensive movies of its time.

If you like science fiction movies and you don’t know Metropolis, you have missed the very first blockbuster of this popular genre. Of course, it was not the very first science fiction movie at all. Already 25 years earlier in 1902 the great Georges Meliés had sent some men to an adventurous journey to the moon, but Melies movie was only about 16 minutes long (according to the manually chosen projection speed.[8] Metropolis had an entire length of 153 minutes and a production budget of about 5 Mio Reichsmark an incredible amount of money for 1927. And unfortunately the contemporary audience did not really appreciate the movie, because there was only a revenue of 75,000 Reichsmark which means a total disaster for the production company.

The screenplay of Metropolis was written by German–Austrian filmmaker, screenwriter and occasional film producer and actor Fritz Lang and his wife Thea Von Harbou a popular writer in Weimar Germany. The film‘s plot originated from a novel written by Harbou for the sole purpose of being made into a film. Thea von Harbou and Lang co-wrote all of Lang’s movies from 1921 through 1933 including 1922‘s Dr. Mabuse der Spieler (Dr. Mabuse the Gambler), which ran for over four hours in two parts in the original version and was the first in the Dr Mabuse trilogy, 1924‘s five-hour Die Nibelungen and the 1931 classic M,[6] his first talking picture Lang left Germany in 1934 and moved to Paris and further to the United States, where he continued his filming.

Metropolis began filming on 22 May 1925 and lasted over a year. The cast of the film was mostly composed of unknowns in particular also the nineteen-year-old protagonist Brigitte Helm who had no previous film experience. Shooting of the film was a draining experience for all the actors involved, due to the demands made of them by director Fritz Lang. For the scene where the worker’s city was flooded, Helm and five hundred children from the poorest districts of Berlin had to work for fourteen days in a pool of water that Lang intentionally kept at a low temperature. Lang would frequently demand numerous re-takes, and took three days to shoot a simple scene where actor Gustav Fröhlich collapses at Brigitte Helm‘s feet.

According to Ufa’s press department, more than 600 kilometers of film were exposed for the shots, which corresponds to more than 350 hours of playing time. Long perfectionism, but also bad weather, made production more expensive, which Ufa, which was already in financial difficulties in 1925, neither wanted nor was able to cope with. In the cool autumn of 1925, poorly fed children were used for the flooding scene. The following year, other lightly clothed extras were available in the unheated studio for the same sequence repeated several times. The mass scene of the flooded city, which takes barely ten minutes in the film, took more than six weeks to shoot, during which Lang repeatedly chased the extras (unemployed people who were cheap and available in large numbers) into the ice-cold water.

For Metropolis the special effects expert, Eugen Schüfftan created pioneering visual effects Among the effects used are miniatures of the city, a camera on a swing and most notably, the Schüfftan process in which mirrors are used to create the illusion that actors are occupying miniature sets. Young actress Brigitte Helm also played her role’s robot double, the Maschinenmensch a robot built by the mad scientist Rotwang to resurrect his lost love. For the Maschinenmensch costume a whole-body plaster cast was taken of actress Brigitte Helm and the costume was then constructed around it. A chance discovery of a sample of plastic wood (a pliable substance designed as wood-filler) allowed to build a costume that would both appear metallic and allow a small amount of free movement. Nevertheless Helm sustained cuts and bruises while in character as the robot, as the costume was rigid and uncomfortable.

Despite the film’s later reputation, some contemporary critics tore it apart. The criticism after the premiere in January 1927 was predominantly negative. Although the filmic effects and the technical effort were praised, Thea von Harbous’s script was torn to pieces. The New York Times called it a “technical marvel with feet of clay“. And famous author H. G. Wells called it “quite the silliest film“ and accused it of “foolishness cliche platitude and muddlement about mechanical progress and progress in general.” He faulted Metropolis for its premise that automation created drudgery rather than relieving it, wondered who was buying the machines’ output if not the workers and found parts of the story derivative of Shelley’s Frankenstein and his own story The Sleeper Awakes.

The film was a commercial fiasco: after its premiere on 10 January at the Berlin Ufa-Palast am Zoo, it was screened in a single Berlin cinema – the UFA-Pavillon on Nollendorfplatz (600 seats[7]) – and attracted only 15,000 viewers until 13 May 1927, Black Friday in Berlin. In March 1927, the financially troubled Ufa was taken over by the then most influential German media entrepreneur Alfred Hugenberg. The premiere version was then confiscated and the copies destroyed. On August 25 of the same year, a shortened version based on the American model had its premiere in the Munich Sendlinger-Tor-Lichtspiele and in the Ufa-Palast Stuttgart, but also found hardly any audience.

Today Metropolis is considered a classic of expressionist film art and a source of inspiration for many later works.

The History of the Future and Why Science Fiction Matters | Brady Kruse | TEDxMSState, [9]