You are here: Home › astronomy › Deep Impact and the Comet 9P/Tempel 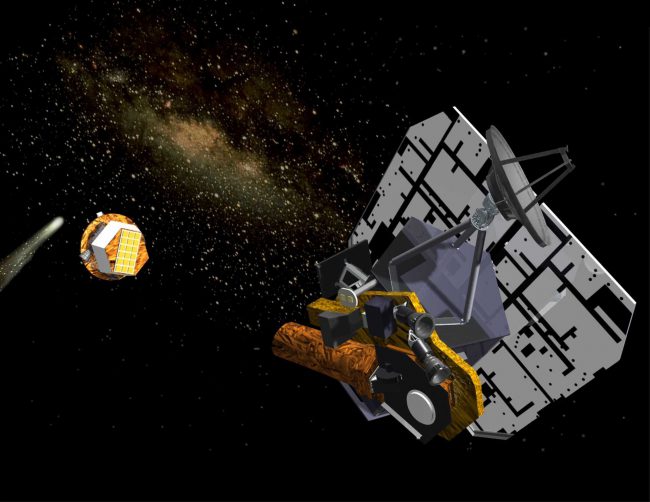 Deep Impact during the approach to Temple 1, shortly after pushing off the Impactor (computer graphics)

On January 12, 2005, NASA space probe Deep Impact was launched. It was designed to study the interior composition of the comet 9P/Tempel, by releasing an impactor into the comet, which successfully collided with the comet’s nucleus.

The main mission of Deep Impact was to explore the interior of Temple 1 by placing a 372 kg heavy projectile (impactor) into the trajectory of the comet, which hit it and left a crater behind. The impact and the ejected material were examined with the instruments of the probe and with further earth and space-based telescopes. For the first time it was possible to see the inside of a comet and to release the original material of the solar system from the inside of the comet. This material dates back to the time of the formation of the solar system and forms the nuclei of comets. Scientists hope that this new view will not only help them to understand comets better, but also to better understand the role of comets in the early history of the solar system. 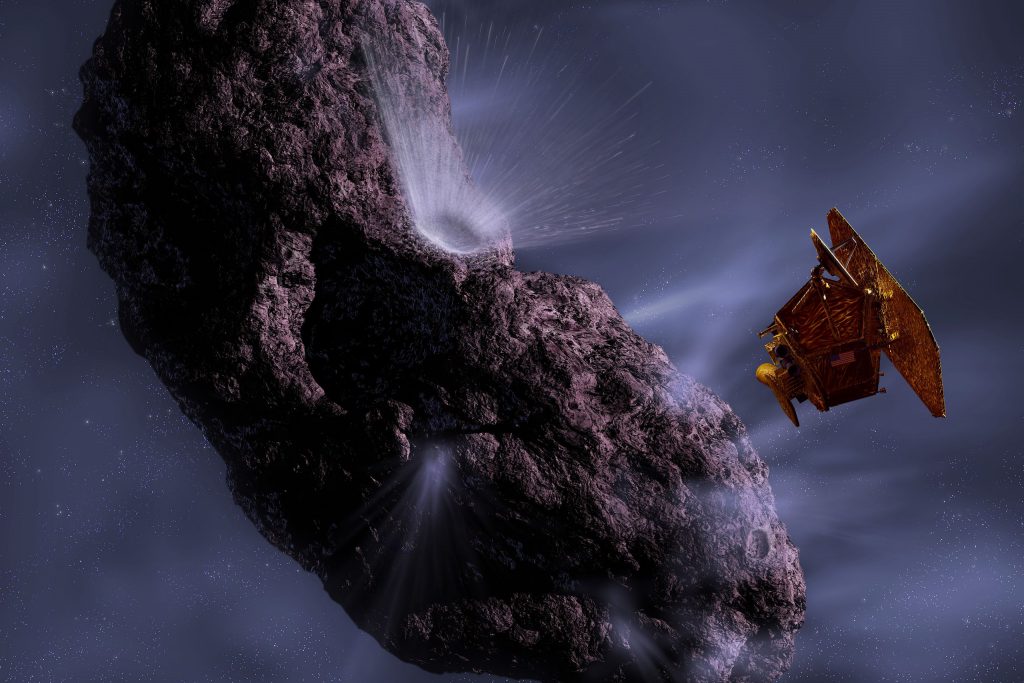 The mission goals in detail were:

The aim of the mission was therefore to explore the differences between the properties of the interior of a comet’s nucleus and those of its surface.

Deep Impact consisted of two components: the flyby probe and the impactor, which hit the comet on 4 July 2005 and was destroyed. The passing probe served the impactor as a bus until shortly before the impact. The total mass of the two components at take-off was 973 kg. The impactor consisted mainly of copper (49%) and aluminium (24%). This mixture reduced a contamination of the spectral lines of the comet nucleus that were recorded after impact because copper was not expected to be present on the comet. 113 kg of the total impactor mass was cratering mass, designed to produce the largest possible crater. The impactor wore a CD containing 625,000 names of Internet users who signed up for the “Send Your Name to a Comet” campaign on the Deep Impact homepage between May 2003 and the end of January 2004.

The first proposals for a comet impact mission were made by NASA as early as 1996, but NASA engineers remained sceptical as to whether the comet could be hit. Finally, on 7 July 1999, Deep Impact, led by Michael A’Hearn, was approved by the University of Maryland at College Park together with MESSENGER for funding under the Discovery programme.  The cost of the spacecraft was estimated at 240 million US dollars at the time. The space probe’s launch was originally scheduled for January 2004, but was later on rescheduled for January 2004. Deep Impact reached the Kennedy Space Center in October where further software tests were accomplished and on January 12, 2005, Deep Impact finally was on its way to Tempel 1. 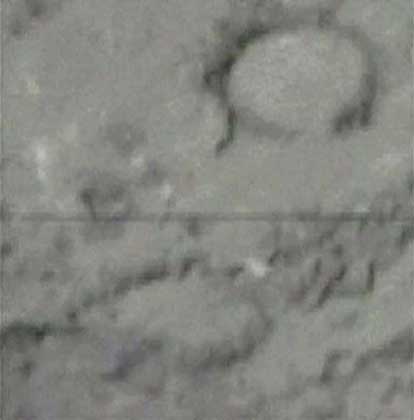 The comet Tempel 1 is photographed by a NASA probe before the washing machine-sized probe collided into the comet half the size of Manhattan in this image taken from television footage July 3, 2005. The spectacular collision, 83 million miles (134 million km) away from Earth, capped a risky voyage to uncover the building blocks of life on Earth.

The planned cruise phase began in March and the first photo of Tempel 1 was achieved in April. The most important approach phase started in early May and the comet’s orbit as well as its rotation and dust was studied. The first targeting maneuver began in June at a speed of 6m/s. The following phase is titled as encounter phase, and it started five days before impact. The autopilot took over about two hours before impact and took pictures of Tempel 1 every 15 seconds. The last image was sent three seconds before impact at about 30km above the comet. The event of the impact itself was viewed by several space telescopes, but the fly-by craft was out of sight as it was moving in a different orbit than the comet itself. Shortly after the impact, lightening was viewed and the impactor was completely destroyed. Then, a fountain of 3500°C hot and fluid core material broke out. Also, a great amount of dust was whirled up and allowed many scientific calculations concerning the comet’s density, temperature and surface. The fact that the comet consisted of various geological layers surprised the scientists highly and they concluded that Tempel 1 could be a unification of two different bodies.

The primary mission of the Deep Impact flyby probe ended on August 3, 2005 after the transfer of the last scientific data obtained from the comet Temple 1. Since the probe had survived the flight through the coma of the comet completely unharmed and still had sufficient fuel reserves, it was soon considered to extend the mission and to send Deep Impact to another comet. This extension of the mission became known as DIXI (Deep Impact eXtended Investigation of comets). Another proposal for an extended mission called EPOCh (Extrasolar Planet Observations and Characterization) was to use the HRI telescope to search other stars for Earth-like planets (exoplanets). In 2007, NASA announced that both mission proposals had been selected and that the probe would now carry out the combined mission under the name EPOXI (Extrasolar Planet Observation/eXtended Investigation of comets). After the 85P/Boethine target comet originally intended for the EPOXI mission could no longer be found, comet 103P/Hartley was selected as the new target. The probe reached 103P/Hartley on November 4, 2010.

In September 2013, a mission update was posted, saying that “communication with the spacecraft was lost some time between August 11 and August 14 … The last communication was on August 8. … the team on August 30 determined the cause of the problem. The team is now trying to determine how best to try to recover communication. ” It was assumed that the computers on the spacecraft were continuously rebooting themselves and so were unable to issue any commands to the vehicles thrusters. Further attempts to contact the craft were abandoned on September 20, 2013.