You are here: Home › physics › Victor Hess and the Cosmic Ultra Radiation 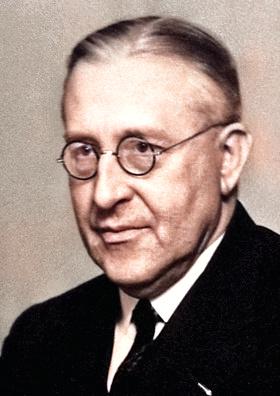 On June 24, 1883, Austrian-American physicist, and Nobel laureate in physics Victor Francis Hess was born. Hess shared the Nobel Prize for Physics with Carl Anderson in 1936 for his discovery of cosmic rays.[5]

Victor Franz Hess was born near Peggau in Styria, Austria, to Vinzenz Hess, a royal forester in Prince Louis of Oettingen-Wallerstein’s service, and his wife Serafine Edle von Grossbauer-Waldstätt. He attended secondary school at Graz Gymnasium from 1893 to 1901. From 1901 to 1905 Hess was an undergraduate student at the University of Graz, and continued postgraduate studies in physics until he received his PhD there in 1906 [3]. In 1906 and 1907 he worked at the Mineralogical Institute of the University of Vienna. From 1910 to 1920, after a short period at the 2nd Institute of Physics at the University of Vienna, where Egon von Schweidler familiarized him with the latest findings in the field of radioactivity, he worked at the newly founded Institute for Radium Research of the Austrian Academy of Sciences as an assistant under Stefan Meyer. During World War I, Hess headed the X-ray department of a reserve hospital.[2]

Research in Radioactivity and Atmospheric Electricity

Intending to do postdoctoral work in optics, Hess made arrangements to study under Paul Drude at the University of Berlin. But Drude committed suicide a few weeks before Hess was to become his students, and Hess went instead to the University of Vienna on the invitation of Franz Exner, a pioneer in the study of radiation, who, with Egon von Schweidler, interested Hess in investigating radioactivity and atmospheric electricity.[2]

The Ionization Levels of the Atmosphere

For many years, scientists had been puzzled by the levels of ionizing radiation measured in the Earth’s atmosphere. The assumption at the time was that the radiation would decrease as the distance from the earth, the source of the radiation, increased. The electroscopes previously used gave an approximate measurement of the radiation, but indicated that at greater altitude in the atmosphere the level of radiation might actually be higher than that on the ground. In 1910 Theodore Wulf measured ionization at the bottom and top of Eiffel Tower,[6] which is some 300 meters hight, and found that considerably more ionization existed at the top than could be expected if it were caused by ground radiation. His results were not given unqualified acceptance, however. Nor were the experiments of the scientists who in 1909, 1910 and 1911 made balloon ascents to record ionization, for their instruments developed defects.[2]

Victor Hess approached this mystery first by greatly increasing the precision of the measuring equipment, and then by personally taking the equipment aloft in a balloon. He systematically measured the “ultra-radiation” at altitudes up to 5.3 km during 1911-12. The daring flights were made both at day and during the night, at significant risk to himself. After making an ascent during an almost total eclipse of the sun on April 12, 1912 Hess further concluded that, since ionization did not decrease during the eclipse, the sun could not itself be the main source of the radiation.[2]

The result of Hess’s meticulous work was published in the Proceedings of the Viennese Academy of Sciences, and showed the level of radiation decreased up to an altitude of about 1 km, but above that the level increased considerably, with the radiation detected at 5 km being about twice that at sea level. His conclusion was that there was radiation penetrating the atmosphere from outer space, and his discovery was confirmed by Robert Andrews Millikan in 1925,[7] who gave the radiation the name “cosmic rays”. Hess’s discovery opened the door to many new discoveries in particle and nuclear physics. In particular, both the positron and the muon were first discovered in cosmic rays by Carl David Anderson.[5] Hess and Anderson shared the 1936 Nobel Prize in Physics.

Hess took a leave of absence in 1921 and travelled to the United States, working at the United States Radium Corporation, in New Jersey, and as Consulting Physicist for the US Bureau of Mines, in Washington DC. In 1923, he returned to the University of Graz, and was appointed the Ordinary Professor of Experimental Physics in 1925 and dean of the faculty in 1929. The University of Innsbruck appointed him Professor, and Director Institute of Radiology, in 1931, where he founded a station for the observation of cosmic radiation on Hafelekar mountain near Innsbruck at a height of 2,300 meters.[2]

Hess relocated to the United States with his Jewish wife in 1938, in order to escape Nazi persecution. The same year Fordham University appointed him Professor of Physics, and he later became a naturalized United States citizen in 1944. In 1946, less than a year after the atomic bomb was dropped on Hiroshima, he and Paul Luger of Seattle University conducted the first tests for radioactive fallout in the United States. Many of these were made from the eighty- seventh floor of the Empire State Building. The following year Hess went from the heights to the depths of Manhattan, measuring the radioactivity of granite in the 190th Street subway station at the base of Fort Tyron which was covered by more than 50 m of rock.[2]

How cosmic rays help us understand the universe – Veronica Bindi, [9]