You are here: Home › philosophy › You are either a Spinozist or not a Philosopher at all 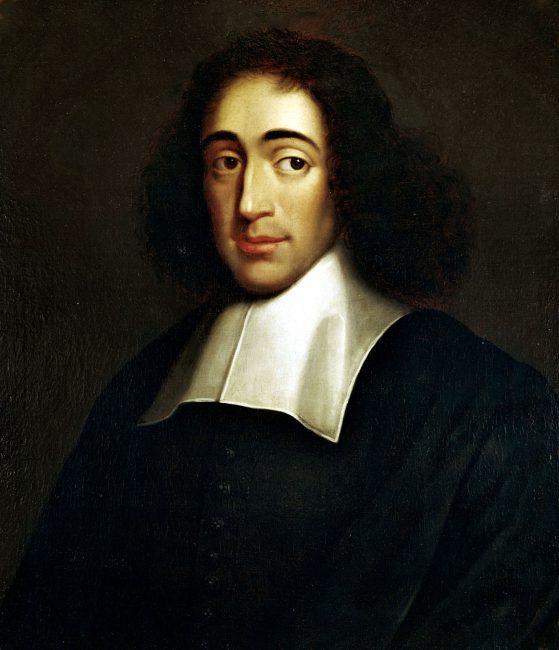 On November 24, 1632, Jewish-Dutch philosopher of Portuguese Sephardi origin Baruch Spinoza was born. By laying the groundwork for the Enlightenment and modern biblical criticism, including modern conceptions of the self and the universe, Spinoza came to be considered one of the great rationalists of 17th-century philosophy.

“Beauty, my dear Sir, is not so much a quality of the object beheld, as an effect in him who beholds it. If our sight were longer or shorter, or if our constitution were different, what now appears beautiful to us would seem misshapen, and what we now think misshapen we should regard as beautiful. “
— Baruch Spinoza, Letter to Hugo Boxel (Oct. 1674)

Baruch Spinoza was born as Bento de Espinosa in a house in the Jewish quarter of Amsterdam, today Waterlooplein and surroundings. Eight days later he was introduced to the Jewish community as Baruch. His father was Miguel or Michael de Spinoza, also known as Gabriel Alvares d’Espinosa, his mother, whose second wife, was Hanna Debora Senior. The only reliable information about Spinoza’s youth is that at the age of five he was registered with his father, his older brother Isaak (died 1649) and his younger brother Gabriel in the register of members of the Ets Haim Association, which was founded to award scholarships to students of the Talmud Tora school. In the parish books he only appears again after the death of his father (March 1654), namely in the donation book, according to which he made several payments in the month after the death of his father and as his successor (eldest still living son).

Probably in the first half of the 1650s Spinoza came into contact with Mennonites. In the Latin school of the ex-Jesuit Franciscus van den Enden (1602-1674) he learned Latin. Here he was able to expand his horizons and became familiar with the ideas of Descartes and late scholastics. In 1656 Spinoza, together with Juan de Prado, a doctor and free thinker who had immigrated from Portugal via Hamburg to the parish only in 1655, and Manuel Ribeira, expressed strong doubts about various doctrines of faith that were central to the parish. On 27 July 1656 he was then excluded from the Amsterdam Portuguese synagogue with the ban[6] (Cherem) because of his allegedly bad views and actions and after milder measures had not helped. Spinoza is considered one of the first secular Jews. He lived celibate and withdrawn. He earned his living by turning and grinding optical lenses.

Spinoza occupies a special position in the history of philosophy. He neither belonged to an established philosophical school, nor did he himself found a new one. He was one of the most radical philosophers of early modern times. His Ethica, ordine geometrico demonstrata, is in form in synthetic representation and, as the title suggests, in the method of Euclid’s elements in “basic concepts”, “axioms”, “theorems”, “demonstrations”, and “corollaries”, giving the appearance of irrefutable certainty. Spinoza wrote a metaphysics and ethics in the manner of a geometry textbook.[5]

Spinoza’s philosophy has above all an ethical-practical goal: he wants to distinguish the only true thing from the illusory goals of life, which, if achieved, could give him a stable and truly satisfying joy. To make this possible, he developed an ethic (especially in the last three books of ethics), the foundations of which (presented in the first two books of ethics) are metaphysical. The ethical and metaphysical reflections required a propaedeutic-methodological work, which Spinoza underwent in the Tractatus de intellectus emendatione. But since ethics is inseparable from political philosophy in his eyes, he developed his own political thinking both within the framework of the Tractatus theologico-politicus and the Tractatus politicus.

Since, according to Spinoza, “substance” as such has neither intelligence nor will, there is no providence, no plan of salvation; since it is the cause of itself, there is also no blind doom. Ethics goes back to the “ontology” of God that Spinoza designs. Man can participate in the divine nature, the goal is a development of the world according to the natural necessity of the laws of God. Spinoza’s ethics demand to see things as God sees them: holistically. This means from the point of view of eternity (sub specie aeternitatis) to see every detail (idea, object or process) as part of a unified world whole. A clear turning away from Aristotelian ideas is Spinoza’s assertion that there are no purpose causes, but only value-neutral, “active” causes that are only “necessary”. All causes have a dynamic for life support and “benefit” (which should not be confused here with utilitarianism).

Spinoza’s concept of rational insight is characterized by an unclouded, radical optimism regarding the abilities of the human mind. He said that we could not only clarify all the secrets of nature, but also adequately recognize God: “The human soul has an adequate knowledge of the eternal and infinite being of God.”

“The fact is that Spinoza is made a testing-point in modern philosophy, so that it may really be said: You are either a Spinozist or not a philosopher at all.”
— Georg Wilhelm Friedrich Hegel, in Lectures on the History of Philosophy (1896) [12]

Already around 1660 Spinoza’s biblical and religion-critical attitude was known in Rijnsburg. He worked on the Tractatus de intellectus emendatione (On the Progress of Understanding) and Korte Verhandeling van God, de Mensch, en deszelos Welstand (Short Tract on God, Man and His Happiness), in which ideas from his later main work Ethics… are already echoed. His reputation as an astute connoisseur and his idiosyncratic development of Descartes‘ philosophy attracted the interest of many scholars.[2] Thus he had contact with Henry Oldenburg, who would later become one of the secretaries of the newly founded Royal Society in London. In 1663 Spinoza published the Renati Descartes principiorum philosophiae (PPC), the only work that appeared under his name during his lifetime. In 1669 he moved to The Hague.

Drawing the Attention of the Church

Since 1670, the Church tried to impose a ban on Spinozas’ in the same year and on anonymous Tractatus theologico-politicus (TTP), but this did not succeed until 1674, two years after the assassination of the liberal rulers, the Brothers de Witt. In 1675, the parish in The Hague was again active, because there was a rumour that Spinoza had finished a new book; it could only have been about ethics. In The Hague Spinoza received visits from important scholars, among them Ehrenfried Walther von Tschirnhaus [3] and in November 1676 Gottfried Wilhelm Leibniz.[4]

“My opinion concerning God differs widely from that which is ordinarily defended by modern Christians. For I hold that God is of all things the cause immanent, as the phrase is, not transient”
— Baruch Spinoza, Letter 21 (73) to Henry Oldenburg , November (1675)

Spinoza died unexpectedly at the age of 44 on Sunday, 21 February 1677, around 3 p.m. in his apartment at the Paviljoensgracht in The Hague. The circumstances of his death, probably caused by a chronic lung disease, are not known, but perhaps his lifelong tuberculosis, then diagnosed as consumption, was the cause.

Susan James: Why Should We Read Spinoza? (Royal Institute of Philosophy), [11]