You are here: Home › literature › Lope de Vega and the Spanish Golden Age of Literature 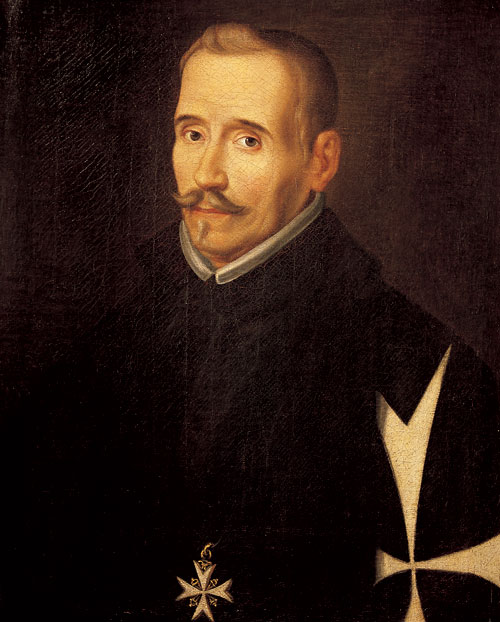 On November 25, 1562, Spanish poet Lope de Vega, or with full name Félix Lope de Vega Carpio, one of the key figures in the Spanish ‘Siglo de Oro’, the Golden Century Baroque literature, was born. His reputation in the world of Spanish literature is second only to that of Miguel de Cervantes, [3] while the sheer volume of his literary output is unequalled, making him one of the most prolific authors in the history of literature. Nicknamed “The Phoenix of Wits” and “Monster of Nature” by Cervantes, Lope de Vega renewed the Spanish theatre at a time when it was starting to become a mass cultural phenomenon.

“And what shall I say of the poets? Oh, this poor century of ours! In the coming year many of them will make their start, but not one of them is as bad as Cervantes, or idiotic enough to praise Don Quixote.”
— Lope de Vega in a letter, August 14, 1604;

Lopé Felix de Vega Carpio was born at Madrid fifteen years after Miguel de Cervantes as second son and third child of Francisca Fernandez Flores and Félix de Vega, an embroiderer. His relations, who were noble, though poor, gave him the basis of a liberal education. At the age of five he was already reading Spanish and Latin, by his tenth birthday he was translating Latin verse, and he wrote his first play when he was 12. Fortunately, the Bishop of Avila came upon Lope and, sensing the young boy’s talent, took him under his wing and finally enabled Lope’s enrollment at the University of Alcalá. After graduation, the duke of Alba took him into his employment as secretary. His love affair began with Elena Osorio, an actress of exceptional beauty and maturity, though awhile into their relationship she changed suit and chose another man over him. Obviously this was quite traumatic for Lope and he was exiled from Castile for eight years due to his attacks on her and her family.

Serving in the Spanish Navy

During this time was driven into the Spanish Navy, where in 1583 he took part in the Spanish expedition against the Azores and in 1588 he took service with the “Invincible Armada,” which was intended to place England under the Spanish yoke, but was itself almost annihilated. Lope’s luck again served him well, and his ship, the San Juan, was one of the few vessels to make it home to Spanish harbors in the aftermath of that failed expedition. Back in Spain, he passed the remainder of his exile in Valencia, at that time a centre of considerable dramatic activity, and took to the serious writing of plays. In 1590 he was appointed secretary to the duke of Alba, whom he followed to Toledo and then to the ducal estate at Alba de Tormes, where his wife died in childbirth in 1595.

From 1605 until his death he remained a confidential secretary and counselor to the duke of Sessa, with whom he maintained a voluminous and revealing correspondence .In 1607 he joined the service of Luis Fernando de Córdoba initially as “secret” secretary, later as secretary for political letters and love letters. The initially purely professional relationship, which lasted 28 years, became a true friendship. Two years later the work Arte Nuevo appeared, in which he announced that he was very proud to have written 483 comedies. It was also in this work that he developed his ideas about dramatic art, in which natural beauty is the ideal of art. In 1608 he was also named to a sinecure position as a familiar of the Inquisition and then prosecutor (promotor fiscal) of the Apostolic Chamber. By this time, Vega had become a famous poet and was already regarded as the “phoenix of Spanish wits.” His writing in the early 1610s also assumed heavier religious influences and, in 1614, he joined the priesthood. His patron, the duke, fearful of losing Vega’s services, succeeded in having one of the poet’s former lovers, the actress Lucia de Salcedo, to seduce Vega. Thus, the duke was able to permanently recover his secretary.

Vega thereafter became involved in new and scandalous romantic relationships. The most notable and lasting of his relationships during this time was with Marta de Nevares, who would remain with him until her death in 1632. Further tragedies followed in 1635 with the loss of Lope, his son by Micaela and a worthy poet in his own right, in a shipwreck off the coast of Venezuela, and the abduction and subsequent abandonment of his beloved youngest daughter Antonia. Lope de Vega took to his bed and died of Scarlet fever, in Madrid, on 27 August of that year. His death evoked national mourning throughout Spain.

Living the Life of a Writer

Lope’s life contained as much romance, adventure, and conflict as that of any of his fictional characters. During his lifetime, Lope de Vega had many affairs. He was married twice, and fathered at least six children; only three of the children were said to be birthed by his wives. He continued to have affairs, even when he became a priest in 1614. He was a prolific writer with a vast output. Overall, he is attributed some 3,000 sonnets, 3 novels, 4 novellas, 9 epic poems, and about 1,800 plays. Although the quality of all of them is not the same, at least 80 of his plays are considered masterpieces. To hold the attention of his audiences, Lope de Vega kept the length of his plays relatively short, consciously ignored the classical unities, convoluted his plots to produce the unexpected, and wrote so as to be easily understood by the common people.

Lope de Vega coined the classic form of comedia with three acts, changing verse dimensions and the figure of “Gracioso” (the funny opponent of the hero). The main themes in his works are honour, love, patriotism and religion. Another important theme is the family, which is often linked to honour. He created the “coat and sword piece”, the popular drama in which the right of the people against the encroachments of the nobility is emphasized, as well as mythological and shepherd pieces. Of the more than 1,500 comedias, about 500 have been preserved (the most famous is The Judge of Zalamea, adapted by Calderón de la Barca), as well as poems and novels. A very important difference between the Italian comedia and the Spanish comedia is that the Italian comedia is very much based on the Greek and the Latin comedia, whereas the Spanish comedia refers to the Spanish culture alone.