You are here: Home › history › The Philosophical Transactions of the Royal Society 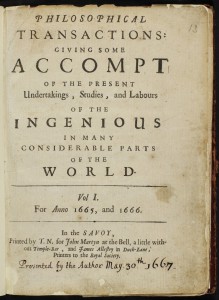 “Had I been a literary man I might, perhaps, have moralised upon the futility of all ambition. But as it was, the thing that struck me with keenest force was the enormous waste of labour to which this sombre wilderness of rotting paper testified. At the time I will confess that I thought chiefly of the Philosophical Transactions and my own seventeen papers upon physical optics.”
— H. G. Wells, The Time Machine (1895)

Already in 1660, at Gresham College, London, UK, 12 men, including Christopher Wren,[5] Robert Boyle,[6] John Wilkins,[7] and Sir Robert Moray decide to found what is later known as the Royal Society of London for Improving Natural Knowledge, a learned society for science, and possibly the oldest such society still in existence, embodying the principles of Sir Francis Bacon.[8] By 1662, the Royal Society was granted a charter to publish by King Charles II and on 6 March 1665, the first issue of Philosophical Transactions was published under the visionary editorship of Henry Oldenburg, who was also the first Secretary of the Society, four-and-a-half years after the Royal Society was founded. Its full title of the journal as given by Oldenburg, “Philosophical Transactions, Giving some Account of the present Undertakings, Studies, and Labours of the Ingenious in many considerable parts of the World“. 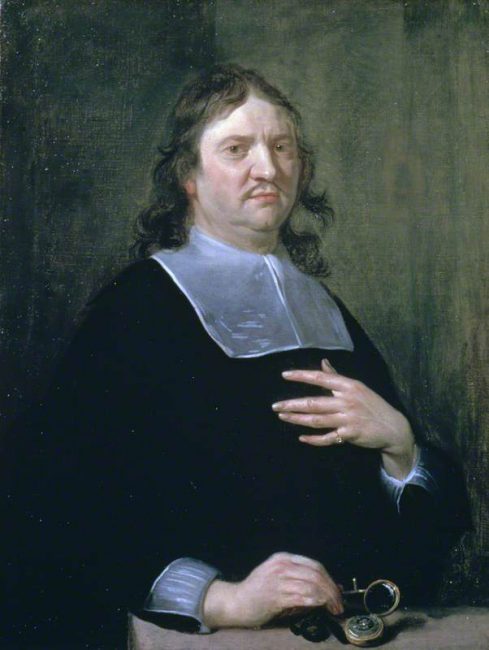 Oldenbourg and the first 136 Issues

The Society’s Council minutes dated 1 March 1664 (in the Julian calendar) ordered that “the Philosophical Transactions, to be composed by Mr Oldenburg, be printed the first Munday of every month, if he have sufficient matter for it, and that that tract be licensed by the Council of this Society, being first revised by some Members of the same“. Oldenburg published the journal at his own personal expense and seems to have entered into an agreement with the Society’s Council allowing him to keep any resulting profits. He was to be disappointed, however, since the journal performed poorly from a financial point of view during his lifetime, just about covering the rent on his house in Piccadilly. Oldenburg put out 136 issues of the Transactions before his death in 1677.

The Invention of the Scientific Journal

The first volumes of what was the world’s first scientific journal were very different from today’s journal, but in essence it served the same function; namely to inform the Fellows of the Society and other interested readers of the latest scientific discoveries.[1] The familiar functions of the scientific journal, as e.g. Registration (date stamping and provenance), Certification (peer review), Dissemination and Archiving were introduced at inception by Philosophical Transactions. In November 1664 Oldenburg wrote to Robert Boyle: ‘We must be very careful as well of regist’ring the person and time of any new matter, as the matter itselfe, whereby the honor of the invention will be reliably preserved to all posterity‘ (registration and archiving)’ and subsequently ‘...all ingenious men will thereby be incouraged to impact their knowledge and discoverys‘ (dissemination).

According to a legend, Henry Oldenburg did not see himself as a theologian in a position to adequately assess the quality of submitted essays on scientific topics. He therefore delegated this task to other scientists who were considered to be competent in the respective subject. This procedure was later adopted by other scientific journals. However, this procedure has almost nothing to do with the scientific practice in the Royal Society of the 17th century. In 1665 provisions were made for the tract to be revised by members of the Council of the Royal Society, providing the framework for peer review to eventually develop, becoming fully systematic as a process by the 1830s. Issue 1 contained such articles as: an account of the improvement of optic glasses; the first report on the Great Red Spot of Jupiter; a prediction on the motion of a recent comet (probably an Oort cloud object); a review of Robert Boyle’s ‘Experimental History of Cold‘; Robert Boyle’s own report of a deformed calf [4]; and more.[2]

In its formative years Isaac Newton had seventeen papers published in the journal including his first paper – New Theory about Light and Colours – which effectively served to launch his scientific career in 1672. In the same year his new reflecting telescope was described and the original drawing was also published in the journal. Philosophical Transactions has also published the work of Charles Darwin, Michael Faraday, William Herschel and many more celebrated names in science.

Today, you can access the online archive of the Philosophical Transactions of the Royal Society with more than 60.000 articles including also the very first issue from 1665. Due to copyright restrictions only paper being published more than 70 years ago are freely available.[3] In July 2011 programmer Greg Maxwell released through the The Pirate Bay, nearly 19 thousand articles that had been published before 1923, and were therefore in the public domain. They had been digitized for the Royal Society by Jstor, and public access to them originally was restricted through a paywall. However, in October of the same year, the Royal Society released for free all its articles prior to 1941, but denied that this decision had been influenced by Maxwell’s actions.

If you are interested in the beginnings of the Royal Society, you might like to watch Professor Michael Hunter’s lecture as he discusses the cultural and scientific context surrounding the formation of The Royal Society. Royal Society at Gresham College.

The Setting up of The Royal Society – Professor Michael Hunter, [10]