You are here: Home › history › Otto the Great – Founder of the Holy Roman Empire 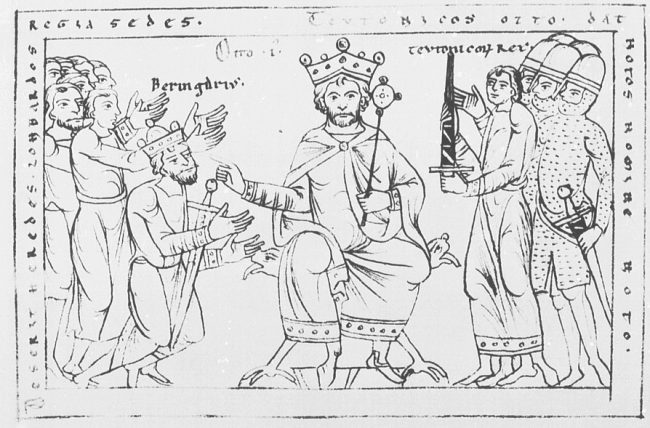 On November 23, 912 AD, Otto I, also referred to as Otto the Great, emperor of the Holy Roman Empire and founder of the Ottonian dynasty of German emperors, was born as the oldest son of the Duke of Saxony Henry the Fowler (“Heinrich, der Vogler” referring to a German poem „Herr Heinrich sitzt am Vogelherd…“ by Johann Nepomuk Vogl, 1835 [1]) and his second wife Matilda of Ringelheim. By the time of Otto’s birth, the German crown was in possession of the Franks. On December 23, 918, Conrad I of Germany, the King of East Francia and Duke of Franconia, died. On his deathbed Conrad persuaded his younger brother Duke Eberhard of Franconia, the presumptive heir, to offer the crown to Otto’s father Henry, although both had been at odds with one another. Nevertheless, Conrad considered Henry to be the only German duke capable of holding the German kingdom together. Thus, in May 919 for the first time ever a Saxon instead of a Frank reigned over the kingdom.

All German Tribes united in a Single Realm

Otto gained first experience as a military commander when the German kingdom fought against Slavic tribes on its eastern border. With Henry’s dominion over the entire kingdom secured by 929, his son Otto was designated by his father to receive the crown, confirming him as Henry’s heir. When Henry died of a cerebral stroke on July 2, 936, at his palace, the Kaiserpfalz in Memleben, all German tribes were united in a single realm. Otto at the age of 23 years already held his father’s position as Duke of Saxony and was elected as King by receiving the German crown on August 7, 936 in Charlemagne‘s former capital of Aachen.[2]

The decisive Battle of Lechfeld

His coronation at Aachen showed that the Carlovingian traditions of empire were still in force. It was the rulers of the other great duchies that caused Otto initial problems. But by 947 he had solved them by absorbing the duchy of Franconia into his direct rule and by handing over the others, Lorraine, Swabia, and Bavaria, to members of his family. By 951 Otto had been drawn into Italy by the fear that it might be absorbed by the nearby king of Burgundy or his own dukes of Swabia or Bavaria. Otto managed to cope with this problem by crossing Italy and marrying Adelaid, the widowed Italian Queen – thus establishing his claims to her lands. Before he could consolidate his position there, however, he was drawn back to Germany by a revolt of his leading dukes, led by his son and heir, and by a serious incursion of the nearby Hungarians. He put down the revolt and crushed the Hungarians at the decisive battle of Lechfeld in 955.

One of Otto’s strategies was to engage churchmen to help him to govern his realm and to furnish him with armed forces, such as, e.g. his brother Archbishop Bruno of Cologne, whom he entrusted the duchy of Lorraine. By appointing churchmen to office, whose feuds were not hereditery, Otto managed to establish a most useful and dependable counterweight to the secular nobles, who often were unreliable and had heirs as well. Thus he installed the so-called Ottonian system, a close alliance of the German realm with the Church. But, Otto did also well in foreign policy. He intervened in the struggle between the French Capetians and Carolingians and thus assured himself of their acceptance of his absorption of Lorraine into the empire. He kept control over Hedeby and the archbishoprics in Denmark. He began the conquest of the Slavs beyond the Elbe River, and he forced the Duke of Bohemia to do him homage.

Emperor of the Holy Roman Empire

Finally, in 961, the ancient idea of an universal empire now possessed Otto’s mind and he invaded Italy and after conquering Rome, Otto was crowned emperor of the Holy Roman Empire by Pope John XII on February 2, 962. Later on, Otto and the Pope quarreled, and it was not without some difficulty that he was able to replace the pope with another candidate, whom he forced upon the clergy and nobles of Rome. Otto spent his last years mostly in Italy, where he tried unsuccessfully to absorb Venice and southern Italy, which were controlled by Byzantium. Before his death in 973, however, Otto was able to secure Byzantine recognition of his imperial title and a Byzantine princess as a bride for his son Otto II. Otto was buried at Magdeburg. His contemporaries always compared his tremendous physical strength to that of a lion.

The collapse of the Great Franconian Empire had led to a decline in cultural life. Only since Heinrich I had introduced the new order of rule and Otto had finally secured it with the Hungarian victory in 955, could it blossom again. This cultural upswing can be divided into two phases. During the first phase, the royal court secured the material conditions and thus created the basis for the rise. Otto’s success in power brought new sources of income, such as tributes from the Slavic region in the east and the newly developed silver veins in the Harz Mountains. These also benefited the churches. The second phase was determined by the work of Otto’s spiritual brother Brun. As director of the court chapel and archbishop of Cologne, Brun made a special effort to promote cathedral schools, but also art and church construction. Following his example, cathedral schools were established in Magdeburg, Würzburg and numerous other places. In addition, monasteries such as Fulda, St. Gallen, St. Emmeram/ Regensburg or Corvey retained their place as centres of education. It was the women’s monasteries sponsored by Otto that finally heralded the so-called Ottonian Renaissance. The most important works of the time were created in the diocese and monasteries closest to the king. Widukind von Corvey and Hrotsvitha of Gandersheim proudly confessed that the king and his successes had inspired them to their works.[7]