You are here: Home › explorer › Bartolomeu Dias and his Trip into the Pacific Ocean

Most likely on May 29, 1500, Portuguese explorer Bartolomeu Dias died by drowning in a storm near Cabo das Tormentas. Dias sailed around the southernmost tip of Africa in 1488, reaching the Indian Ocean from the Atlantic, the first European known to have done so.

Not too much is known about the life and achievements of Bartolomeu Dias. He may have been a descendant of João Dias, who sailed around Cape Bojador with Gil Eanes in 1434, and of the merchant and explorer Dinis Dias, who in 1444, on behalf of Henry the Navigator,[5] was the first European to sail to the westernmost point of continental Africa, discovering Cabo Verde and Terra dos Guineus in what is now Senegal. He was a Knight of the royal court, superintendent of the royal warehouses, and sailing-master of the man-of-war, São Cristóvão. In search of the sea route from Europe to Asia, Portuguese expeditions had been exploring the west coast of Africa since the time of Henry the Navigator in the early 15th century.

In October 1487, it is believed that King John II of Portugal appointed him to sail around the southern tip of Africa in the hope of finding a trade route to India. The pilot of his flagship, the caravel São Cristóvão, was Pêro de Alenquer. The second caravel of the fleet, the São Pantaleão, was commanded by João Infante. As pilot he was assisted by Alvaro Martins. A supply ship with the pilot João de Santiago was under the command of Bartolomeu Dias’ brother, Diogo Dias. There were also six Congolese on board, brought to Lisbon by Diogo Cão, with the task of advancing inland along the coast, looking for trade opportunities as well as for the Prester John, who was a fabled Christian priest and ruler.

Along the West Coast of Africa

Dias’ expedition sailed towards the south along the West coast of Africa and After having sailed past Angola, Dias reached the Golfo da Conceicão by December. It is assumed that he discovered first Angra dos Ilheus and that he was hot by a giant storm afterwards. Dias continued to search the coast again to the east, but found only ocean. Bartolomeu Dias sailed around Cape of Good Hope at a considerable distance to the west and southwest, he turned towards the east, and taking advantage of the winds of Antarctica that blow strongly in the South Atlantic, he sailed northeast. After 30 days without seeing land, he probably entered what he named Aguada de São Brás on 4 February 1488. 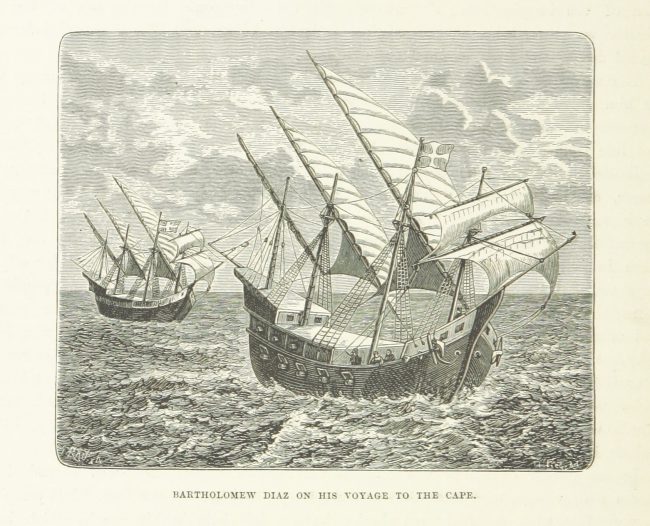 An illustration of the São Cristóvão and São Pantaleão, two of the ships in Bartolomeu Dias’ expedition around Africa, from The Sea: its stirring story of adventure, peril & heroism., Volume 2 (1887)

Forced to Turn Back

It is believed that Bartolomeu Dias’ expedition reached its furthest point on 12 March 1488 when they anchored at Kwaaihoek, near the mouth of the Bushman’s River, where a padrão — the Padrão de São Gregório — was erected before turning back. Even though he intended to continue sailing to India, Dias was forced to turn back when his crew refused to go further. During the journey back, Dias observed the southernmost point of Africa, later called Cabo das Agulhas, or Cape of Needles. Dias named the rocky second cape Cabo das Tormentas for the tempestuous storms and strong Atlantic-Antarctic currents that made ship travel so perilous. Further sources of the journey differ and not much has been reported. However, in Lisbon, after 15 months at sea and a journey of nearly 16,000 miles, the returning mariners were met by triumphant crowds. The official report of the expedition has been lost.

Following his expedition, Dias probably settled for a time in West Africa, where Portugal had established a gold-trading site. Manuel I, ordered Dias to serve as a shipbuilding consultant for the expedition of Vasco da Gama.[3] Dias sailed with the da Gama expedition as far as the Cape Verde Islands, then returned to Guinea. Da Gama’s ships reached their goal of India in May 1498. Afterward, Manuel sent out a massive fleet to India under Pedro Álvares Cabral, and Dias captained four of the ships.[4] They reached Brazil in March 1500, then headed across the Atlantic toward South Africa and, further ahead, the Indian subcontinent. At the feared Cabo das Tormentas, storms struck the fleet of 13 ships. In May 1500, four of the ships were wrecked, including Dias’, with all crew lost at sea.