You are here: Home › explorer › Vasco da Gama and the Route to India 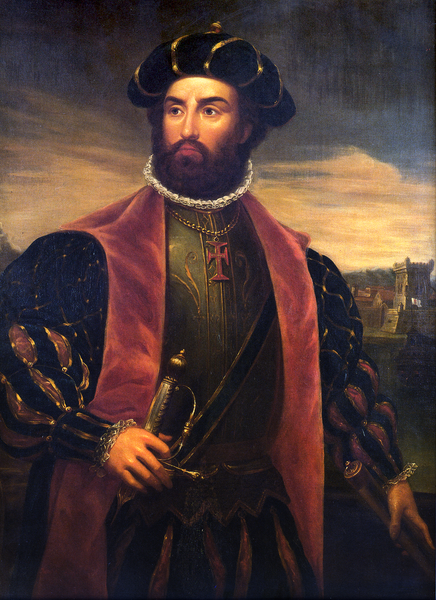 On December 24, 1524, Portuguese explorer Vasco da Gama, 1st Count of Vidigueira, passed away. He is referred to as one of the most successful explorers in the Age of Discovery and was the commander of the first ships to sail directly from Europe to India. After decades of sailors trying to reach the Indies, with thousands of lives and dozens of vessels lost in shipwrecks and attacks, da Gama landed in Calicut on 20 May 1498.

Vasco da Gama was born into a family of noblemen, his father belonged to the Order of Santiago and was occupied with several administrative tasks. Little is known about Vasco da Gama’s youth and life before his great voyage of discovery. His parents were Estêvão da Gama (governor of Sines and Silves) and Isabel Sodré, whose family originally came from England and had good family relations with the Order of the Knights of Christ. The first historical record of Vasco da Gama’s life dates back to 1480, the year in which he joined the Knights of Santiago. In 1492, Johann II. Vasco da Gama took retaliatory measures against French merchant ships in the port of Setúbal and in ports in the Algarve in response to attacks by French pirates on Portuguese ships off the West African coast. In 1495 da Gama was appointed Commander of the two Commanderies of the Order of Santiago, Mouguelas and Chouparia, in recognition of his services. Da Gama earned himself a great reputation during this year and was soon promoted and nominated to travel to India.

The Sea Route to India

Why Vasco da Gama was chosen as commander-in-chief for the trip to India has not yet been clearly explained. The two contemporaries and chroniclers João de Barros and Damião de Góis point out that he had succeeded his father, who under John II had been one of the most important advocates of the search for the sea route to India around Africa. What is certain, however, is that Gama had very good relations with King Manuel I of Portugal, who had ruled since 1495, and was considered a man who enjoyed the king’s trust. Manuel I also made it possible for Vasco da Gama to join the Order of the Knights of Christ. The possibly missing maritime knowledge of Vasco da Gama was compensated by the best pilots and helmsmen of Portugal, who knew the waters to be navigated – as far as they were known to the Portuguese at all. In addition, Bartolomeu Dias, [7] the conqueror of the Cape of Good Hope, accompanied the small fleet to the Cape Verde Islands. This search had already been started 80 years earlier by Henry the Navigator.[6] The aim of the expedition was to eliminate the Arab, Persian, Turkish and Venetian intermediary trade, which made spices such as pepper extremely expensive in Europe. 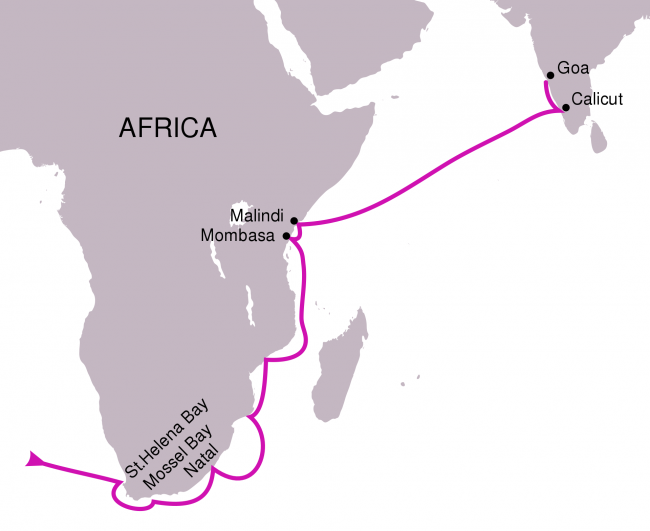 Da Gama and his crew left the port of Lissabon on July 8, 1497 with the 120t ship São Gabriel, and two other boats, the São Rafael, and Bérrio. The crew was highly experienced with the weather and sea conditions of the south Atlantic-Ocean and on November 4, they reached the westcoast of South Africa. They traveled to Mombasa in April of the next year, and to Malindi, where the travelers took a helping navigator on board. On May 20, 1498, the Portugese sailors finally reached India’s Malabar Coast as the first European Ships of all times. There, da Gama was to trade important spices and resources, unfortunately only with moderate success. The crew’s first ship reached Lissabon in the early Summer of 1499 while Vasco da Gama’s ship stayed a few weeks longer at the Azores due to the serious illness of his brother who was the commander of the second ship of the fleet. But when he reached Portugal in September of the same year with many goods and spices, he was cordially received with a great procession. 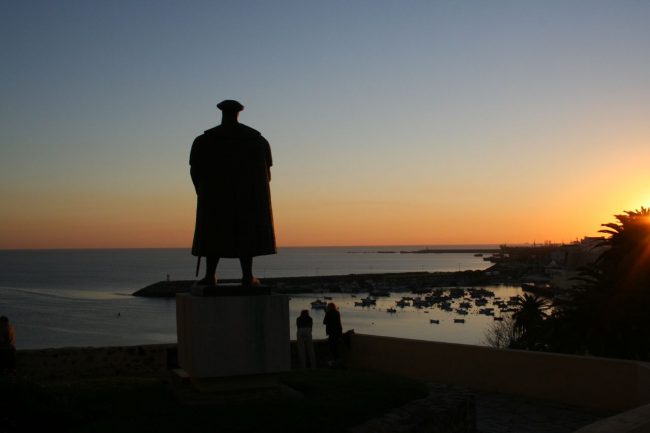 Rear view of statue of Vasco da Gama at Sines, looking out to sea due south, photo: Bunks, CC BY 3.0, via Wikimedia Commons

The Second Journey to India

The second journey to India by Vasco da Gama followed in 1502, but this time with heavily armored ships. When the fleet arrived India, attacking their trade monopoly, a state of war evolved instantly. The Portuguese were able to succeed against the Indian fleet and was then able to built the first fort, strengthening Portugals position in India. Through suspicious trade agreements and Portugals permanent presence in the Indian Ocean they were able to develop a monopoly for foreign spices in Europe. 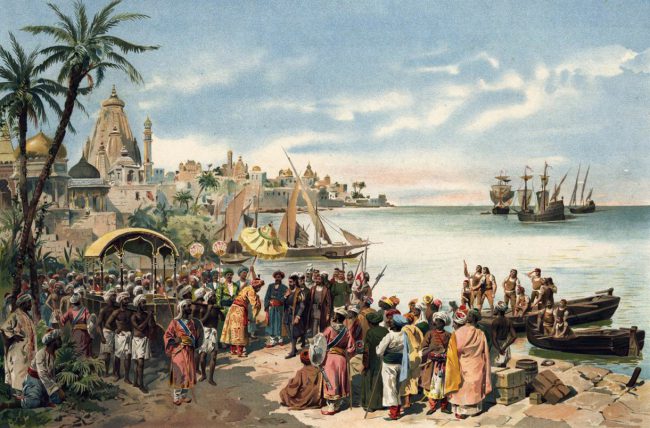 The arrival of Vasco da Gama at Calicut, by Roque Gameiro, 1900.

The emergence of the Portuguese in the Indian Ocean and their attack on the monopoly of Arab and Indian traders in Indian trade quickly led to a latent state of war. In 1502, immediately after his arrival in Indian waters off Calicut, Vasco da Gama still had to fight with 15 of his own ships from a fleet of more than 100 Indian and Arab, mostly smaller ships, which the Portuguese squadron wanted to intercept. Avoiding the Enterkampf, the Portuguese could destroy the enemy fleet almost completely by their effective gunfire. With partly forced trade agreements, privileges towards allied Indian princes as well as a permanent fleet presence, Vasco da Gama Portugal quickly began to secure the monopoly in the European spice trade and laid the foundation stone for the Portuguese colonial empire in Asia. Within a few years, Portugal gained a hegemonic position as a naval power in the western part of the Indian Ocean.

After his successful return, Vasco da Gama received an annual pension of 400,000 reals from King Manuel and became a member of his court. King Manuel died in December 1521. His son and successor João III intended to take action against the spreading mismanagement and corruption in the Estado da Índia under the then Governor Duarte de Menezes. The court decided to use the rich diplomatic and military experience of Vasco da Gama, as well as his particularly in Portuguese India sonorous name for this task to restore authority in Goa. On April 5, 1524, Vasco da Gama, appointed Viceroy of India, left on his flagship, the great carac Santa Catarina do Monte Sinai, accompanied by his two sons Estêvão and Paulo Lisbon, heading for India.  But the viceroy da Gama was ill. He died only three months after his arrival on Christmas Eve in Kochi in southwest India from an “infection of the neck region”. First he was buried in Kochi in the Convento Santo António in the Ornate of the Knights of Christ. In 1538 his son Pedro da Silva da Gama ordered the bones to be transferred to the chapel of the monastery of Nossa Senhora das Relíquias in his native Vidigueira.