You are here: Home › physics › Alfred Nier – a Pioneer in Mass Spectroscopy 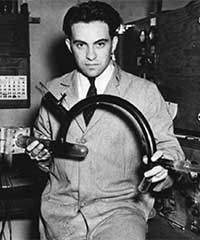 On May 28, 1911, American physicist Alfred Otto Carl Nier was born. Nier pioneered the development of mass spectrometry. He was the first to use mass spectrometry to isolate uranium-235 which was used to demonstrate that 235U could undergo fission and developed the sector mass spectrometer configuration now known as Nier-Johnson geometry.

“…You try to untangle all of these processes to get at the primordial ratio of the heliums in the cosmic dust—it tells you what the solar system was like 5 billion years ago.”
– Alfred Nier, in 1989 oral history interview with Michael Grayson and Thomas Krick

Alfred Otto Carl Nier was born in St Paul, Minesota, USA, into a family of German imigrants. Despite limited financial resources they enabled Alfred to attended the University of Minnesota at age 16, where he graduated M. Sc. in electrical engineering in 1931. He certainly would have fixed his career in that field had it not been for the lack of engineering jobs due to the world economic crisis and the Great Depression.Nier decided to continue his graduate studies in physics. The focus on nuclear physics in those times motivated Nier to select as a thesis topic the use of mass spectrometry to obtain a more precise knowledge of the isotopic composition of the elements. He developed a new instrument having higher resolution than previously available for such studies and undertook the determination of accurate isotopic abundances for five elements, namely argon, potassium, zinc, rubidium, and cadmium. In this work he discovered a rare isotope of potassium, 40K, which later became important in the measurement of geological ages. In 1936, Alfred Nier won, due to his skills on spectroscopy, a 2-year post-doctoral National Research Council fellowship to work with Kenneth Bainbridge at Harvard University, where he constructed a high resolution mass spectrometer and determined the isotopic composition of nineteen elements, in the process discovering four new isotopes (36S, 46Ca, 48Ca,186Os). Two years later, he published measurements of the relative abundance of the isotopes of uranium, measurements that were used by Fritz Houtermans and Arthur Holmes in the 1940s to estimate the age of the Earth.[4]

For mass spectrometry, one of the emerging technologies of that time, the molecules to be investigated are transferred into the gas phase (desorption) and ionized. The ions are then accelerated by an electric field and fed to the analyzer, which “sorts” them according to their mass-to-charge ratio, for example spatially into partial beams as in a sector field mass spectrometer. The molecules can be fragmented. Fragmentation is often desired, especially with comparatively complex biopolymers, since the fragments are more easily transferred into the gas phase, for example in the investigation of proteins. Mass spectrometry is used in many areas. It is used in characterization of chemical compounds, in biochemistry for the investigation of biomolecules, in medical chemistry for the identification of substances in body fluids or organs, in forensic investigations, in doping controls, in environmental analysis, in the analysis of chemical warfare agents and explosives.

Manhattan Project and U-235

Despite an offer to stay on at Harvard following his fellowship, in 1938 he returned to the University of Minnesota to accept an assistant professorship in the Physics Department in order to be closer to his parents. However, two years later Enrico Fermi requested Nier and a few students to prepare a pure sample of uranium-235 using an early mass spectrograph designed by Nier, for John R. Dunning‘s team at Columbia University. It was then sent by US Postal Mail to Dunning’s team. They were then able to show that U-235 was the isotope responsible for nuclear fission, rather than the more abundant uranium-238. This achievement is considered a critical step in the development of the atomic bomb. During World War II, Alfred Nier and the Kellex Corporation in New York City researched on the design and development of efficient and effective mass spectrographs for use in the Manhattan Project to build the atomic bomb in the war.

Geochronology and the Atmosphere of Mars

After World War II, Nier returned to Minnesota, where he chaired the physics department from 195 to 1965, where he worked on geochronology, the upper atmosphere, space science and noble gases. suits conducting remarkable precision mass work that enabled the identification of molecules from their exact molecular weight. He further designed the miniature mass spectrometers used by the Viking Landers to sample the atmosphere of Mars.[5] Alfred Nier became a member of the National Academy of Sciences as well as a foreign scientific member of the Max Planck Society. The Nier Prize is awarded annually by the Meteoritical Society and recognizes outstanding research in meteoritics and closely allied fields by young scientists. Nier’s 218th and final paper was published in the year of his death in 1994 at age 82, on the subject of noble gases in lunar dust grains.