You are here: Home › astronomy › Simon Marius and his Astronomical Discoveries 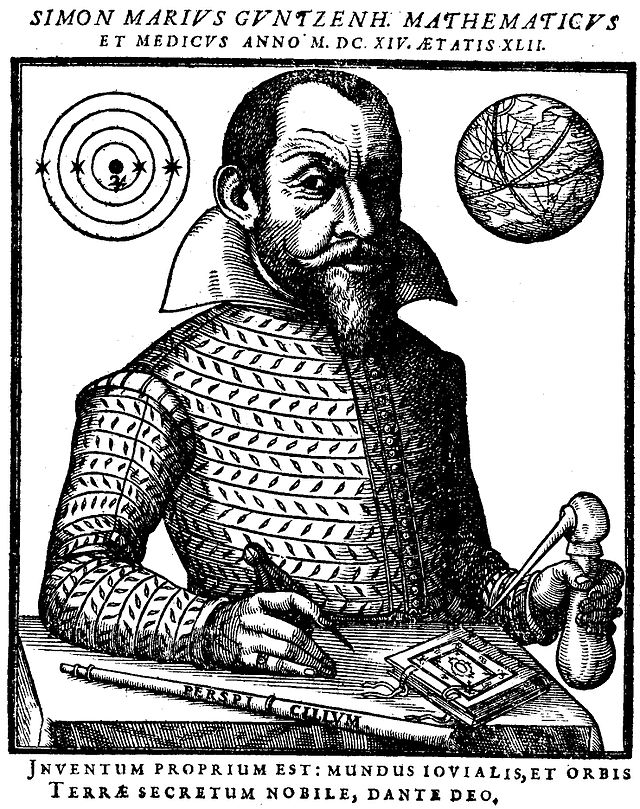 On January 20 (or January 10 according to the old Julian calendar), 1573, German astronomer Simon Marius was born. Marius was pupil of Tycho Brahe, one of the earliest users of the telescope and the first in print to make mention the Andromeda nebula. He studied and named the four largest moons of Jupiter that he claimed to have them discovered independently and even before Galileo.

Simon Marius was born in Gunzenhausen, near Nuremberg in Bavaria, to Reinhard Marius, the Mayor of Gunzenhausen and his wife Elisabetha. Elementary for his education was the fact that, by chance, Margrave Georg Friedrich overheard him singing. Allegedly, the regent took a liking to him and arranged for him to be enrolled in the Fürstenschule at Heilsbronn, a Protestant school for princes in the Heilsbronn monastery, which Marius attended until 1601 becoming its most famous ex-pupil. During this period he became interested in astronomy, and his astronomical and meteorological observations began in 1594.[2] His plan to study at Königsberg couldn’t be realized, however he managed to visit famous astronomer Tycho Brahe at Prague in 1601.[1,4] There, he learned Tycho Brahe‘s observational techniques and instruments. Brahe died that year, and Marius’s stay in Prague lasted only four months. But he did meet David Fabricius there.[7]

Being a versatile observer even at the time before the invention of the telescope, Marius published his observation of the comet of 1596 and precisely established the position of the 1604 supernova in the constellation Ophiuchus. In 1599 Marius published a set of astronomical tables. These efforts resulted in his appointment as mathematician of the Markgrafschaft of Ansbach, in 1601.[2] Having heard that a telescope was being sold at the Frankfurt Fair in 1608, Marius constructed his own. It took him about a year before he had one of sufficient quality to make astronomical observations.[3] In the same year he published the first German translation (from the Greek) of the first six books of Euclid‘s Elements.

Sunspots and the Andromeda Nebula

Marius’ most memorable (and controversial) research involved the telescope:[2] in a letter written in summer 1611 he mentions his observations of Venus, and since August 1611 he had been observing sun spots, and in November of the same year he noticed that the movement of the sunspots and therefore the equatorial plane of the sun is tilted relative to the ecliptic.[1] Simon Marius also observed the Andromeda “nebula”, which had also been known to Arab astronomers of the Middle Ages. Of course he had no notion that he was observing a distant system of stars, because his telescope did not achieve the required resolution. In 1612 Marius measured the diameter of the Andromeda nebula and discerned it as having a dull, pale light which increased in brightness toward its center, like “a candle shining through horn“. 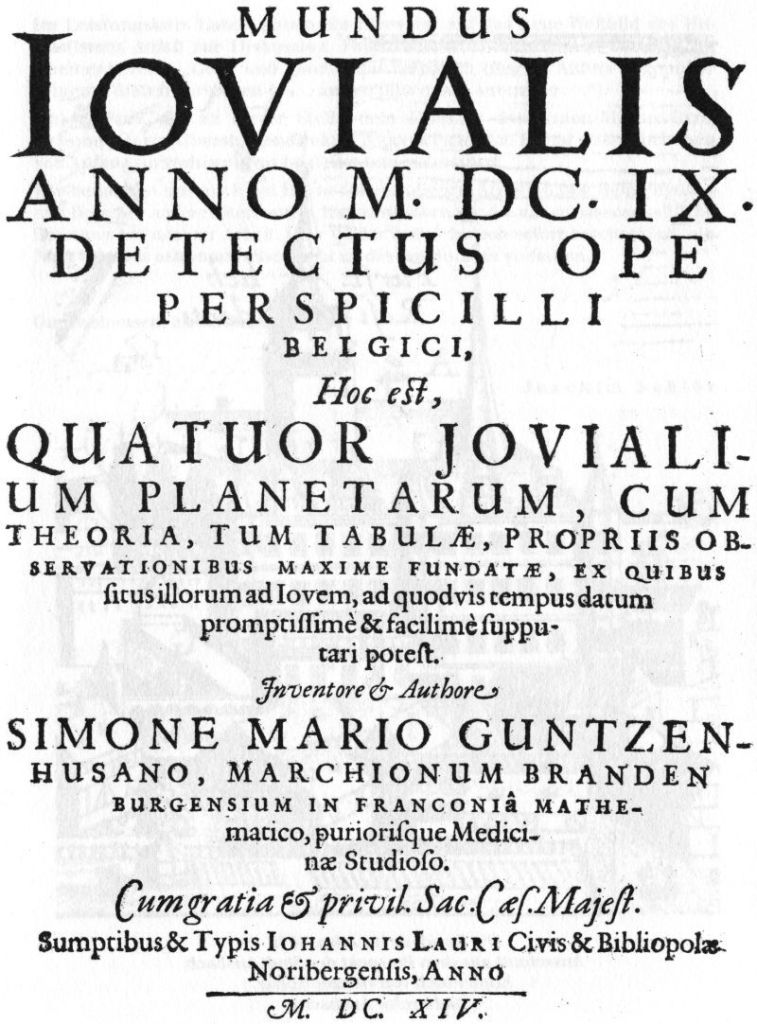 Jupiter and its Moons

In 1614 Marius published his work Mundus Iovialis describing the planet Jupiter and its moons. Here he claimed to have discovered the planet’s four major moons some days before Galileo Galilei.[5,6] This led to a dispute with Galileo, who showed that Marius provided only one observation as early as Galileo‘s, and it matched Galileo‘s diagram for the same date, as published in 1610. It is considered possible that Marius discovered the moons independently, but at least some days later than Galileo.

Regardless of priority, the mythological names by which these satellites are known today (Io, Europa, Ganymede and Callisto) are those given them by Marius. He also concluded from his observations of the Jovian moons that they must orbit Jupiter while Jupiter orbits the Sun. From Marius‘ observations of the Jovian moons he derived better periods of revolution and other orbital elements for them than did Galileo. From his observations of the Jovian planetary system, Marius wrongly concluded that the geocentric Tychonic system, in which the planets circle the Sun while the Sun circles the Earth, must be the correct world system. He also observed the location of Tycho Brahe‘s supernova of 1572 and found a star there which he estimated to be “somewhat dimmer than Jupiter’s third moon.”

Marius drew conclusions about the structure of the universe from his observations of the Jovian moons and the stellar disks. The stellar disks he observed were spurious (likely the Airy disk caused by diffraction, as stars are too distant for their physical disks to be detected telescopically), but Marius interpreted them to be physical disks, like the planetary disks visible through a telescope. He concluded that since he could see stellar disks, the stars could not be as distant as was required in the Copernican world system, and he said that the appearance of the stars as seen through a telescope actually argued against Copernicus. Simon Marius died in Ansbach after a brief illness in 1624.

Barth Netterfield, Astro 101 Class 17: The Jovian planets and their moons. [9]