You are here: Home › philosophy › Anaximander and the Milesian School of Philosophy 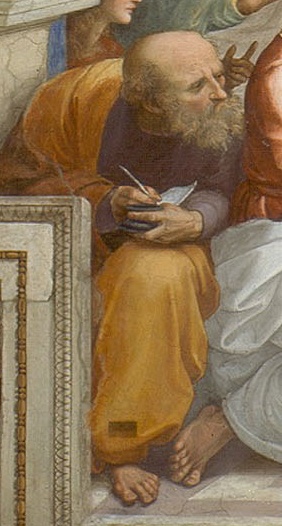 (Probably) Anaximander, from a detail of Raphael’s painting The School of Athens, 1510–1511.

At about 610 BC, pre-Socratic Greek philosopher Anaximander of Miletus was born. He belonged to the Milesian school and learned the teachings of his master Thales. According to available historical documents, he is the first philosopher known to have written down his studies, although only one fragment of his work remains. An early proponent of science he tried to observe and explain different aspects of the universe, with a particular interest in its origins, claiming that nature is ruled by laws, just like human societies, and anything that disturbs the balance of nature does not last long.

“There cannot be a single, simple body which is infinite, either, as some hold, one distinct from the elements, which they then derive from it, nor without this qualification.”, as quoted in Physics by Aristotle

Little is known about the Life of Anaximander

Like for many other ancient Greek philosophers, little is known about the life of Anaximander. Anaximander, son of Praxiades, was born in the third year of the 42nd Olympiad, i.e. 610 BC. According to 2nd century BC grammarian Apollodorus of Athens, he was sixty-four years old during the second year of the 58th Olympiad (547–546 BC), and died shortly afterwards. 4th century rhetirician Themistius mentions that he was the “first of the known Greeks to publish a written document on nature.” Therefore, his texts would be amongst the earliest written in prose, at least in the Western world. According to Aristotle, philosopher Thales precedes Anaximander.[7] It is debatable whether Thales actually was the teacher of Anaximander, but there is no doubt that Anaximander was influenced by Thales’ theory that everything is derived from water. Anaximander is reported to have travelled widely, and founded a colony called Apollonia on the coast of the Black Sea.[1] It is also reported that he displayed solemn manners and wore pompous garments.[3]

None of Anaximander’s writings survive but we do know something about his works which were still available to Aristotle and Apollodorus. Anaximander’s theories were influenced by the Greek mythical tradition as well as by observations made by older civilizations as e.g. the Babylonian astrologers. All these were elaborated rationally. In his desire to find some universal principle, he assumed, like traditional religion, the existence of a cosmic order; and in elaborating his ideas on this he used the old mythical language which ascribed divine control to various spheres of reality. His main writings are thought to have been On Nature, On the Fixed Stars, Geometric Surveying, Sphere, Map of Greece, and Map of the World. The importance of his work is that he introduced scientific and mathematical principles into the study of astronomy and geography.

The Earth is a Cylinder

Anaximander believed that the earth was a cylinder. If this seems a little strange, then we believe that his reasoning was that if one looked around one saw a circle, then he used a symmetry argument to argue that there was another circle with a cylinder between. He appears to have been the first person to argue that the sun, moon, planets and stars revolved around the earth so the sun which rose in the morning was the same sun that had disappeared on the evening of the preceding day. He saw each heavenly body as being a hole in an opaque circular wheel containing fire and encircling the earth. He also argued that the heavenly bodies were at different distances from the earth, but he was entirely wrong in believing that the stars were closer than any of the other heavenly bodies. In Anaximander’s model the earth is suspended in the middle of the circling heavenly bodies.[1]

Anaximander also attempted to give an explanation for how the universe came into being. His philosophy argued that all things arose from ‘apeiron‘, the Boundless. Unlike other Pre-Socratics, he never defines this principle precisely, and it has generally been understood as a sort of primal chaos. As Aristotle writes “a germ, filled with hot and cold, was separated off from the Boundless, then out of this germ a sphere of fire grew around the vapor that surrounds the earth, like a bark round a tree.” The sphere of fire split into several wheels which were then the wheels of the stars, moon, and sun. Anaximander maintains that all dying things are returning to the element from which they came (apeiron).

The Plurality of Worlds

Anaximander already speculated on the plurality of worlds, similar to later philosopher Epicurus. He discussed the origins of life, as well as the origins of the cosmos. He argued that the young earth was covered in seas, some of which began to dry out due to the heat of the sun. Life began in the mud of the seas as they dried out. The first animals had skin covered with spines but after they began to live on dry land, the heat of the sun gradually caused the animals to have fewer spines. He argued that man was not suited to live in this early world, so could only have arisen from the animals living on dry land after conditions became suitable.[1]

A Map of the World

Both Strabo and Agathemerus (later Greek geographers) claim that, according to the geographer Eratosthenes,[5] Anaximander was the first to publish a map of the world. This map, of course, no longer exists, but it must have shown a circular earth – the top of the cylinder. It would have the Mediterranean Sea at its centre and show lands to the north and south, since this was the known world at the time. Some writers credited Anaximander also with the invention of the sundial gnomon. But that can hardly be correct. According to historian Herodotus this instrument came from Babylon, and Thales must have used it to determine the solstices and equinoxes.[4,6,7]

“Anaximander the Milesian, affirmed the infinite to be the first principle, and that all things are generated out of it, and corrupted again into it. His infinite is nothing else but matter.”
– Plutarch