Anthropometric data sheet (both sides) of Alphonse Bertillon (1853-1914), a pioneer of the Scientific Police, inventor of anthropometry, first head of the Forensic Identification Service of the Prefecture de Police in Paris (1893).

On April 23,1853, French police officer and biometrics researcher Alphonse Bertillon was born. Bertillon was the first who applied the anthropological technique of anthropometry to law enforcement creating an identification system based on physical measurements. Anthropometry was the first scientific system used by police to identify criminals. Before that time, criminals could only be identified by name or photograph. The method was eventually supplanted by fingerprinting.

Born in a Family of Scientists

Alphonse Bertillon was born into a family of scientists. His father was a statistician appointed as professor of demography at the School of Anthropology in Paris and his grandfather became famous as the person who coined the term ‘demography‘ in 1855. Alphonse started his career in 1879, a mere clerk at the Paris Prefecture de Police whose job consisted in copying out and filing identification cards and photographs. Soon after, he started to design his own filing system, based on a series of nine anthropometric measurements, each broken down into the categories small, average, and large, which then made it possible to sort out the cards into multiple subdivisions. It is believed that around 1882, Bertillon was given the chance to prove the validity of his system to the Prefect of Police, Ernest Camescasse. Bertillon managed to identify a criminal by proving that the man, who had just been caught on the scene of a buglary, had indeed been arrested for robbery some time before. He used a false name, but with the help of Bertillon, his own body measurements “betrayed” him and he quickly confessed. [1,2]

The anthropometric system as used by Bertillon in the field of law enforcement, made it possible to distinguish between two distinct persons. However, it was not possible to completely proof an individual’s identity. In his method, Bertillon designed a physical description on four areas, typological descriptions of ear, nose, and iris, a detailed description of the body and face and a photographic description protocoling face and profile views (the mug shot). Also, a precise mapping of all specific marks to be found on the body was performed. 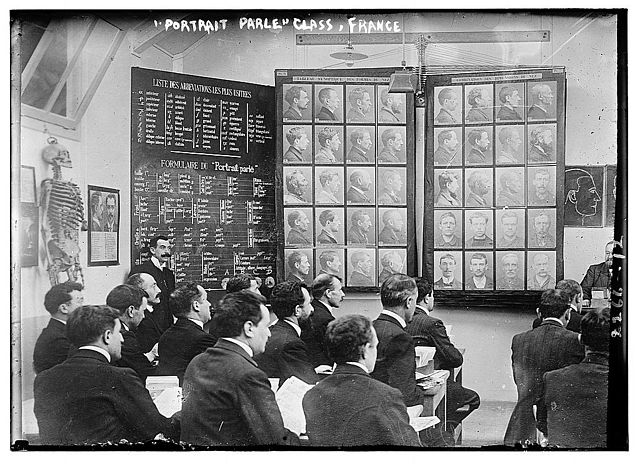 Class on the Bertillon System in 1911

In 1893, the the department of “Judicial Identity” was founded and Bertillon was told to apply his methods to the national archive known as the sommiers judiciaires, where the descriptions and penal records of all convicted criminals were stored. Bertillon more and more contributed to the development of a network system linking the capital to the rest of the national territory. The major cities soon proceded to open their own identification offices, feeding a central database. Bertillon also helped the detectives to use mobile identification tools like stamp-size mug shot and criminal categories albums, descriptive notices and so on. [2]

In the late 19th century, Alphonse Bertillon’s career was seriously threatened by the Dreyfus Affair.[4] He testified as an expert in the case, producing the decisive handwriting analysis of the document allegedly proving the act of betrayal committed by the defendant. He came to the conclusion that Dreyfus would have forged his own handwriting in order to mislead the court. Bertillon was severely accused of supporting the government’s lies and he lost his responsibility for the handwriting analysis laboratory. However despite these developments, Alphonse Bertillon’s work is considered extremely influential. Through innovative courses in anthropometric description and recognition (1895), physical description (1902), and technical police investigation (1912), he widely disseminated his methods among French and international police. [2,3]