You are here: Home › mathematics › Thales of Miletus – (possibly) the Father of Greek Mathematics 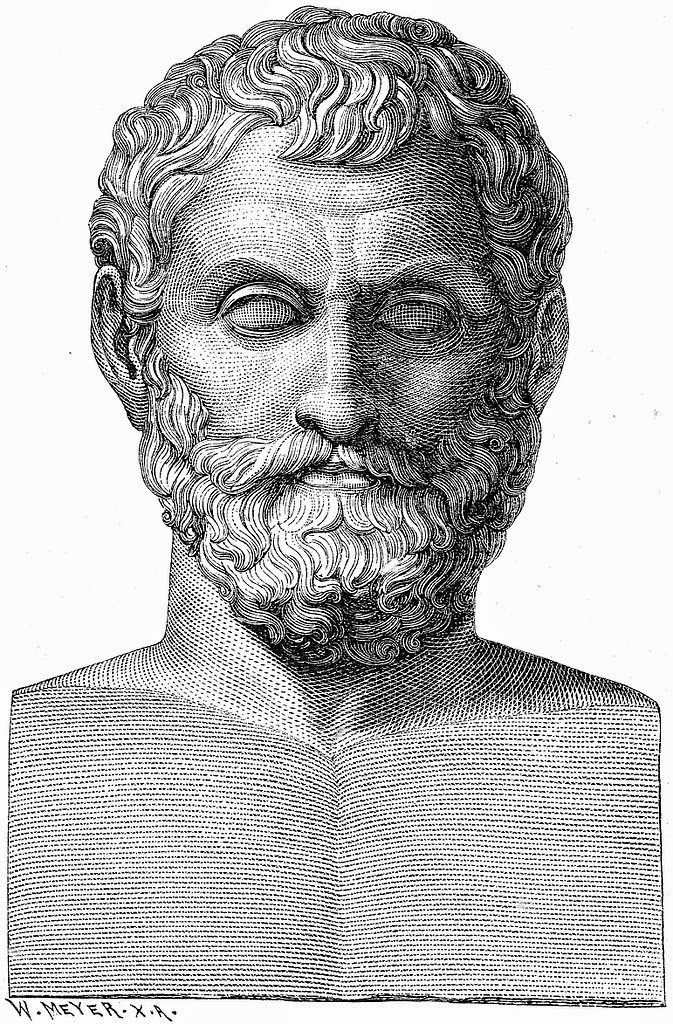 Illustration of (possibly) Thales of Miletus

For today’s blog post, there is no birthday of a popular scientist. Moreover, we want to tackle famous people in the history of science, who don’t have a known birthday. This of course holds for many philosophers, mathematicians, or natural scientists of Antiquity or early Middle Ages. Today, we want to start with the father of ancient Greek mathematics, Thales of Miletus. According to Bertrand Russel, Western philosophy (as well as mathematics) begins with Thales of Miletus.

It is assumed that Thales of Miletus was born in the city of Miletus, an ancient Greek Ionian city on the western coast of Asia Minor in today’s Turkey. Even though his exact time of life is unknown, historians later attempted to calculate it on the basis of events related to him in the later sources, most notably in the work “Lives and Opinions of Eminent Philosophers” by Diogenes Laertius. Laertius wrote that Thales of Miletus may have died in the 58th Olympiad at the age of 78. Further, it is assumed that Miletus’ family was financially good situated. [1]

It is believed that Miletus wrote ‘On the Solstice‘ and ‘On the Equinox‘, but none of these works survived and many doubt that Miletus left any written book. Still, in general there is only little doubt that Miletus at the time had revolutionary approaches to philosophy and mathematics. This is mostly delivered by Aristotle, who wrote in his ‘Metaphysics‘ that Miletus believed that everything comes out of water and that the earth floats on water. Seneca also wrote that this ‘floating theory’ was used by Miletus to explain earthquakes. Revolutionary about this theory was the fact that Miletus apparently rejected supernatural and mystical theories and that he was most likely the first to explain the world by unifying hypothesis. [2]

Thales of Miletus is on this day also credited with several geometric theorems. One states that a circle is bisected by its diameter, he said that angles in a triangle opposite two sides of equal length are equal. Also, Miletus is credited with the theorems that opposite angles formed by intersecting straight lines are equal, that the angle inscribed inside a semicircle is a right angle, and that a triangle is determined if its base and the two angles at the base are given. Still, it is not clear if Miletus really is to be credited with these theorems, as many historians now argue. It is possible that Miletus did not even have a way of measuring angles and most likely in that case, equal angles would have not been a concept he would have understood precisely. [3]

At yovisto, you may be interested in a short video explanation on Thales of Miletus.