You are here: Home › archeology › Carl Blegen – the Sack of Troy and the Truth in Homer’s Iliad 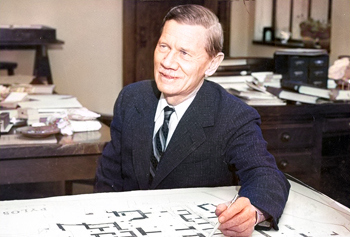 On January 27, 1887, American archaeologist Carl William Blegen was born. He is known for having unearthed evidence that supported and dated the sack of Troy recorded in Homer‘s Iliad. He worked on the site of Pylos in Greece and Troy in modern-day Turkey and directed the University of Cincinnati excavations of the mound of Hisarlik, the site of Troy, from 1932 to 1938.

Blegen was born in Minneapolis, Minnesota, the eldest of six children born to John H. Blegen, a professor at Augsburg College in Minneapolis , and his wife Anna Regine, who both originally had emigrated from Lillehammer, Norway. Among his siblings, his brother Theodore C. Blegen was a famous historian, who specialized on immigration history particularly of Norwegian Americans. Blegen earned his bachelor’s degree from the University of Minnesota in 1904 and started graduate studies at Yale University in 1907. He became a fellow (1911–1913) at the American School of Classical Studies in Athens, Greece [1], during which time he worked on excavations at Locris, Corinth and Korakou.

Reconstructing the Prehistory of Greece

During World War I Blegen was involved in relief work in Bulgaria and Macedonia, receiving the Saviors Order from Greece in 1919. Following the war he completed his Ph.D. at Yale (1920). He was then assistant director of the American School (1920–26). While associated with the American School of Classical Studies, Athens, Blegen excavated a number of sites, notably in the northeastern Peloponnese, of great importance for reconstructing the prehistory of Greece. In 1927, Blegen joined the faculty of the University of Cincinnati. Blegen was professor of classical archaeology at the University of Cincinnati from 1927–1957. His excavations at Troy were carried out between 1932 and 1938, followed by those at the palace of Nestor in Pylos, Greece in 1939 (the dig resumed 1952-1966). Blegen retired in 1957.

Homer’s Iliad was based on Historical Facts

Carl Blegen was absolutely convinced that Homer’s Iliad was based on historical facts, and that the Trojan War indeed took place in the legendary city of Troy. In 1932, he began excavations at the mound of Hisarlık, Turkey, the site of Troy, previously excavated by Heinrich Schliemann (1871–1873 and 1878–1879) [2] and Wilhelm Dorpfeld (1893–1894) in 1932, and continued for seven years.[1] There he and his staff found that the previously identified nine major periods of Troy’s construction, destruction, and rebuilding each represented two or more phases. His team’s stratigraphic study disclosed a total of 46 such phases. Moreover, Blegen suggested that the remains of King Priam’s Troy dated from the major period VIIa (c. 1250 bce), which offered evidence of large-scale human violence as well as fiery devastation. The research was described in Troy: Excavations Conducted by the University of Cincinnati, 1932–38, 4 vol. (1950–58), which he edited. Blegen published a popular account of his findings in Troy and the Trojans (1963).[3]

Continuing to investigate sites described by Homer, Blegen returned to Greece in 1939 and sought to locate the Pylos of King Nestor. He decided upon Epano Englianos, a hilltop in Messenia, five miles north of the Bay of Navarino, as the probable site of Nestor’s palace. Excavation revealed the remains of a large structure or complex of structures. His most significant findings were the first examples of Greek writing, similar to the Linear B script found earlier in Crete.[5] With continued excavation from 1952, more than 1,000 inscribed tablets were found at Pylos, and a fine 13th-century-bce Mycenaean palace was revealed.[3]

After retiring in 1957, Carl Blegen moved to Athens, where he died on August 24, 1971, at age 84. He bequeathed a large collection of his documents to the American School of Classical Studies at Athens