You are here: Home › aviation › Samuel Pierpont Langley and his Aviation Work 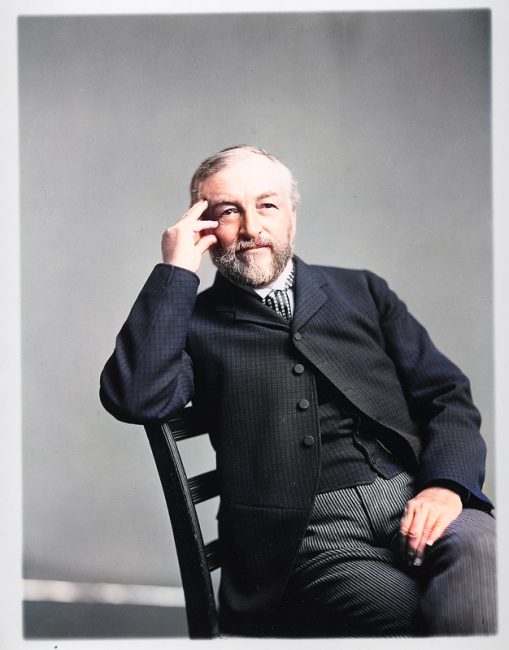 On February 27, 1906, American astronomer, physicist, inventor of the bolometer and pioneer of aviation Samuel Pierpont Langley passed away. Langley attempted to make a working piloted heavier-than-air aircraft. His models flew, but his two attempts at piloted flight were not successful.

Samuel Pierpont Langley was born in 1834 in Roxbury. He started his education at the Boston Latin School and was interested in astronomy immediately. His brother helped him to build instruments and they experimented with refractor types together. The brothers managed to observe the phases of Venus, craters and “seas” on the moon, the Galilean moons of Jupiter, and the rings of Saturn. Langley became an assistant at the Harvard College Observatory and soon he started his career with the U.S. Naval Acadamy where he was appointed professor of mathematics. He then moved to Pennsylvania in order to work at the Allegheny Observatory. Langley always believed that science should be made available to the public. He published for instance his works on the Sun for the non-technical reader and gave numerous lectures. Langley’s research on the Sun also led to expeditions into high mountains to perform experiments. In 1886, Langley received the inaugural Henry Draper Medal from the National Academy of Sciences for his contributions to solar physics.

During his time in Pennsylvania, Langley also became quite enthusiastic about aviation. He read numerous papers on the topics and wondered, what he could do himself. Langley started experimenting with aerodynamics soon. He intended to construct a functioning heavier than air aircraft. Even though his models flew, his attempts at piloted flight were not too successful. He proceeded to design flying models powered by miniature steam engines. Rudyard Kipling [3] described Langley’s experiments later on:

Through Roosevelt I met Professor Langley of the Smithsonian, an old man who had designed a model aeroplane driven—for petrol had not yet arrived—by a miniature flash-boiler engine, a marvel of delicate craftsmanship. It flew on trial over two hundred yards, and drowned itself in the waters of the Potomac, which was cause of great mirth and humour to the Press of his country. Langley took it coolly enough and said to me that, though he would never live till then, I should see the aeroplane established.

In 1896, Samuel Pierpont Langley made his first successful attempt. He managed to fly approximately 3/4 of a mile after being launched from a boat on Potomac River. It is assumed that this distance was ten times longer than any previously attempted heavier than air aircraft. Langley managed to further increase the distance and acquired money from the Smithsonian to develop a piloted airplane. He called his construction the Aerodrome. It is believed that Samuel Pierpont Langley heard about the Wright brothers’ success with their glider in 1902 and it is further believed that he wanted to meet them, without success [4].

Langley’s steam-powered Aërodrome No. 5 in flight, May 6, 1896. Photo by Alexander Graham Bell.

Difference to the Wright Brothers

Langley’s approach to design an aircraft was quite different to the approaches of the Wright brothers, who preferred a controllable airplane that could fly against a strong wind and land on solid ground. Langley’s model however, had no landing gears and was mostly tried out at calm weathers over Potomac River. He required a catapult for launch and the descent into the water resulted in the rebuilding of the plane. Due to safety reasons, the project was highly criticized by journalists and the government. However, the test pilot was always recovered from the river unharmed. The last attempt was made in December 1903. 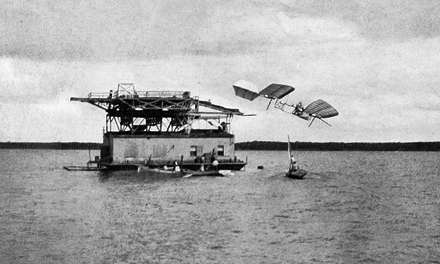 The Aerodrome was modified and flown a few hundred feet by Glenn Curtiss in 1914, as part of his attempt to fight the Wright brothers’ patent, and as an effort by the Smithsonian to rescue Langley’s aeronautical reputation. Nevertheless, courts upheld the patent. However, the Curtiss flights emboldened the Smithsonian to display the Aerodrome in its museum as “the first man-carrying aeroplane in the history of the world capable of sustained free flight“. Langley was the founder of the Smithsonian Astrophysical Observatory. In 1888 Langley was elected a member of the American Antiquarian Society. In 1898, he received the Prix Jules Janssen, the highest award of the Société astronomique de France, the French astronomical society.

Samuel P. Langley and the Aerodrome A, [9]