You are here: Home › art › Paul Klee – One of the most Important Artists of Classical Modern Art 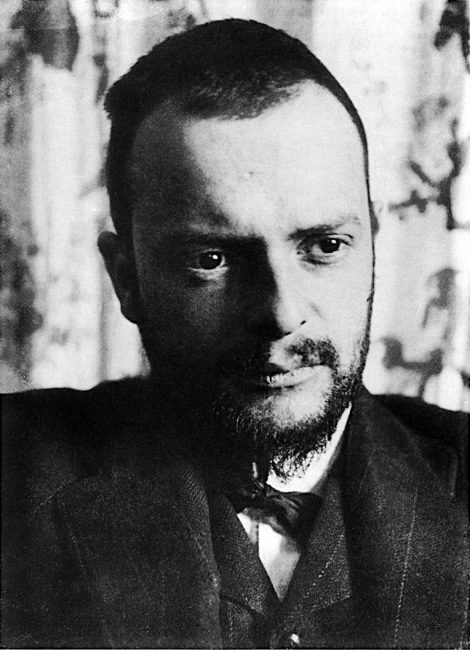 On December 18, 1879, Swiss German artist Paul Klee was born. His versatile work is classified as Expressionism, Constructivism, Cubism, Primitivism and Surrealism. Klee was in close contact with the editorial team of Der Blaue Reiter. Paul Klee is one of the most important artists of classical modern art of the 20th century.

“My mirror probes down to the heart. I write words on the forehead and around the corners of the mouth. My human faces are truer than the real ones.”
— Paul Klee, Diary entry (Munich, 1901)

Paul Klee was the second child of the German music teacher Hans Wilhelm Klee (1849-1940) and the Swiss singer Ida Marie Klee, née Frick (1855-1921). It was thanks to this circumstance that Klee was able to develop his musical abilities at home; they accompanied and inspired him until the end of his life. In 1880 the family moved to Bern, where Klee attended primary school from 1886 to 1890. Klee’s other interests lay in drawing and poetry. His textbooks and exercise books contain countless caricatures. His talent as a draughtsman, however, was not encouraged because his parents wanted him to train as a musician. In 1890 Klee moved to the Progymnasium in Bern. In September 1898 he completed his school education with the Matura at the Literargymnasium in Bern. For further education he left Switzerland and moved to Munich to study art. With this decision he rebelled against the wishes of his parents.

In Munich Paul Klee first studied graphic art at Heinrich Knirr‘s private painting school, as he had been rejected by the Academy of Fine Arts in Munich. In February 1900 Klee moved into his own studio and on 11 October 1900 changed to the painting class of Franz von Stuck at the Art Academy, where Wassily Kandinsky also studied.[1] A six-month study trip in 1901/2 with the sculptor Hermann Haller to Italy should become a decisive experience for Klee’s artistic expressiveness,

After his return from Italy in 1902, Klee lived in his parental home until 1906 and earned his living as a violinist with the Bernische Musikgesellschaft and continued his artistic education by attending anatomical lectures and an anatomical course. In May and June of 1905, Klee, together with his childhood friends undertook a trip to Paris, where he devoted himself to the study of older art in the Louvre and in the gallery of the Palais du Luxembourg. In May 1908 Klee became a member of the Association of Swiss Graphic Artists Die Walze and in the same year took part with three works in the exhibition of the Munich Secession, with six works in the Berlin Secession as well as in the exhibition in the Munich Glaspalast.

In autumn he made the acquaintance of August Macke and Wassily Kandinsky. In winter he joined the editorial team of the almanac Der Blaue Reiter founded by Wassily Kandinsky and Franz Marc.[9] Other collaborators included August Macke, Gabriele Münter and Marianne von Werefkin. However, the publication of the Almanac was postponed in favour of an exhibition. Kandinsky and Marc published the almanac Der Blaue Reiter in May 1912 at Piper Verlag. The almanac was planned for 1911.

After Klee’s acquaintance with Delaunay on a subsequent stay in Paris, Klee’s understanding of light and colour changed fundamentally, trying to translate Delaunay’s inspiration into pictures and leaves, giving them more colour and achieving the effects purely through contrasts and differences in tone. On April 3, Klee set off on a three-week study trip to Tunisia with August Macke and Louis Moilliet. Klee was the only one of the three painters to keep a diary in which he described the entrance to Tunis:

“The sun of a dark power. The colorful clarity of the land promising. Macke feels it too. We both know that we will work well here.”

On 5 March 1916 Klee received his summoning order to join the Bavarian army as a Landsturm soldier. As the son of a German father who had never tried to naturalize his son to Switzerland, Klee was liable to military service during the First World War. On the day of his convocation he learned that his friend Franz Marc had fallen at Verdun. After completing basic military training, he was deployed as a soldier behind the front. In 1917 he was transferred to the Fliegerschule V in Gersthofen, where he worked as the treasurer’s clerk until the end of the war. Therefore he was spared a front-line assignment and was able to continue painting in a room outside the barracks. He continued to paint during the entire war and managed to exhibit in several shows.

In 1919, Klee applied for a teaching post at the Academy of Art in Stuttgart, but he failed. Klee taught at the Bauhaus from January 1921 to April 1931. He was a “form” master in the bookbinding, stained glass, and mural painting workshops and was provided with two studios. In 1922, Kandinsky joined the staff and resumed his friendship with Klee. Later that year the first Bauhaus exhibition and festival was held, for which Klee created several of the advertising materials. Klee was also a member of Die Blaue Vier (The Blue Four), with Kandinsky, Lyonel Feininger, and Alexej von Jawlensky; formed in 1923, they lectured and exhibited together in the USA in 1925.[3] That same year, Klee had his first exhibits in Paris, and he became a hit with the French Surrealists. 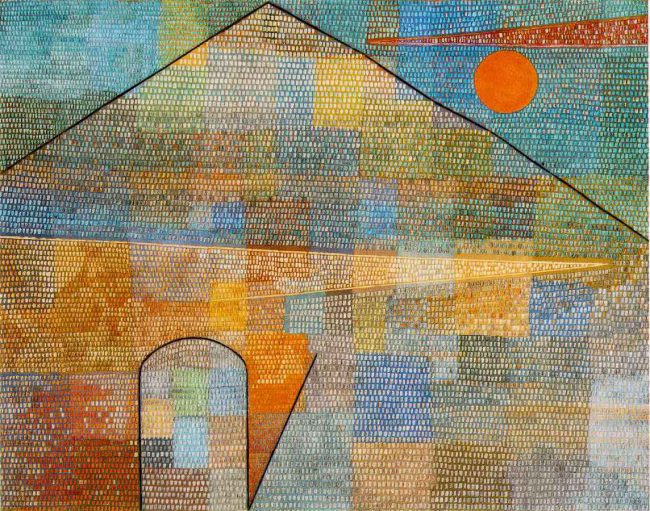 Klee was no longer able to reconcile his personal ideas of life and work with the aims of the Bauhaus. He decided to take the offer to teach at the Düsseldorf Academy from 1931 to 1933. One of Klee’s largest paintings, the painting Ad Parnassum from 1932, dates from his time in Düsseldorf and was otherwise rather small in size. Klee, who only worked with four pupils, now had a secure income again, as he did at the time of the Bauhaus, but fewer obligations, so that he could pursue his artistic intentions. However, he was singled out by a Nazi newspaper, “Then that great fellow Klee comes onto the scene, already famed as a Bauhaus teacher in Dessau. He tells everyone he’s a thoroughbred Arab, but he’s a typical Galician Jew.” His home was searched by the Gestapo and he was fired from his job.

After Hitler’s assumption of power in 1933, Klee was to produce a “proof of Aryan ancestry”. Klee obtained the proof, but the National Socialists described him as a “degenerate artist” and “politically unreliable” and dismissed him from office without notice on 21 April.. The Düsseldorf apartment was vacated on 23 December 1933. The Klee couple emigrated to Switzerland on the same day. The Kunsthalle Bern opened a retrospective of Klee’s work on 23 February 1935, in combination with works by Hermann Haller, which was later shown in a reduced form at the Kunsthalle Basel. In August 1935 Klee fell ill with bronchitis, which developed into pneumonia, and in November with scleroderma, an incurable disease.

“The main thing now is not to paint precociously but to be, or at least become, an individual. The art of mastering life is the prerequisite for all further forms of expression, whether they are paintings, sculptures, tragedies, or musical compositions.”
— Paul Klee, Diary entry (3 June 1902)

On 19 July 1937 the exhibition “Degenerate Art” was opened in Munich,[4] which was shown as a travelling exhibition in Berlin, Leipzig, Düsseldorf and Salzburg, and in which Paul Klee was represented with 17 works. In the further course of the war, another 102 works by Paul Klee were confiscated from German collections as “degenerate art” and sold abroad.  After further hearings, the municipal council of the city of Bern wanted to make a final decision on naturalisation on 5 July 1940. However, his application was no longer processed, as his state of health deteriorated at the beginning of April 1940, which is why he began a spa stay in a sanatorium in Locarno-Muralto on 10 May. He died on 29 June 1940, at the Clinica Sant’Agnese in Muralto at age 60.