You are here: Home › chemistry › Sir William Ramsay and the Discovery of Noble Gases 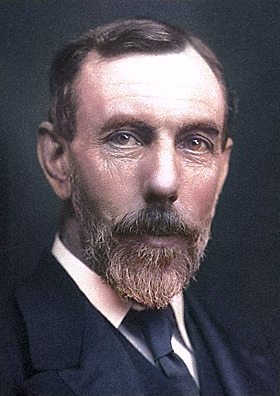 On October 2, 1852, Scottish chemist Sir William Ramsay was born. Ramsay discovered the noble gases and received the Nobel Prize in Chemistry in 1904 “in recognition of his services in the discovery of the inert gaseous elements in air” along with his collaborator, John William Strutt, 3rd Baron Rayleigh, who received the Nobel Prize in Physics that same year for their discovery of argon.[1]

“But I am leaving the regions of fact, which are difficult to penetrate, but which bring in their train rich rewards, and entering the regions of speculation, where many roads lie open, but where a few lead to a definite goal.”
– William Ramsay, in his Nobel lecture, December 12, 1904.

William Ramsay was born in Glasgow, the son of William Ramsay, a civil engineer and surveyor, and Catherine, née Robertson. His uncle was the Scottish geologist Sir Andrew Ramsay. He studied first at the Glasgow Academy and then at the universities in Glasgow, Heidelberg (1870 with Robert Bunsen) and Tübingen. In Tübingen, he completed his doctoral thesis under Wilhelm Rudolph Fittig and received his doctorate there with a thesis on Investigations in the Toluic and Nitrotoluic Acids. Ramsay went back to Glasgow as Anderson’s assistant at the Anderson College. In 1880, he became professor of chemistry in Bristol. In 1887, he accepted a call to University College London. He worked there until 1912.

Ramsay initially dealt with pyridine bases; in 1876 he developed a synthesis of pyridine from hydrogen cyanide (prussic acid) and acetylene. From 1877 he turned to physical chemistry. This was followed by investigations into the dissociation of metal hydroxides and the determination of the specific gravity at boiling point. First, he used new methods to determine the specific gravity of a substance at boiling point, the atomic weight of metals and the surface tension of liquids up to their critical point. From 1887 Ramsay turned his attention to the vapor pressure lines of organic and inorganic substances. He discovered that the gas pressure at constant volume is proportional to the temperature.

The Discovery of Argon

In 1892, Lord Rayleigh had reported that atmospheric nitrogen and chemically synthesized nitrogen had different densities.[1] He had extracted the synthetic nitrogen from ammonia using a process proposed by Ramsay, but the deviation in specific gravity was unexpected. Ramsay concluded that the air should contain another gas with a higher density. Based on the specific heat (at constant volume and pressure), he concluded that the gas should be monatomic. He called the completely unreactive gas argon.

Helium and the other Noble Gases

The German mineralogist William Hillebrand had discovered another unreactive gas in rocks, more precisely in uranium ores. Spectroscopically, Ramsay was able to detect distinct lines. Previously (by Jules Janssen) the spectroscopic lines of this gas had been observed in the solar spectrum. Ramsay found the atomic weight 4 for this gas and named it helium (1895).[2] Because of the newly discovered gases and their enrichment for the periodic table, Ramsay believed he could specify further noble gases and even speculated that there must be an element with an atomic mass of 20. During this time Ramsay began working with Morris William Travers. By 1898 they found the remaining noble gases krypton, neon and xenon. Ramsay classified all noble gases into the periodic table.

After 1898 Ramsay experimented with Frederick Soddy on radium salts. They could detect the helium gas. It seemed that the dream of the old alchemists – to be able to convert atoms into other atoms – had come true. Ernest Rutherford and Soddy expressed the assumption that the conversion is connected with radioactivity and that the radiation probably has a mass. Together with Alexander Thomas Cameron, they conducted research on cancer healing with radioactive elements. Ramsay now also presented the first equations for radioactive conversion of matter. He also put forward hypotheses about the atomic structure, assuming that the nucleus is a positive ion and the electron has an independent existence.

In 1904 Ramsay received the Nobel Prize in Chemistry. Ramsay endorsed the Industrial and Engineering Trust Ltd., a company that claimed it could extract gold from seawater, in 1905. It bought property on the English coast to begin its secret process. The company never produced any gold. During his work he was exposed to strong radioactive radiation, so that he fell ill with nasal cancer, which he eventually succumbed to on on 23 July 1916 at age 63.