You are here: Home › communication › The Unfortunate Inventions of Charles Cros 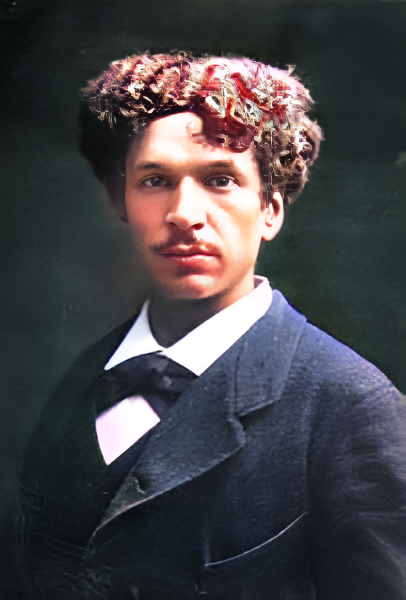 On October 1, 1842, French poet and inventor Charles Cros was born. He developed various improved methods of photography including an early color photo process. He also invented improvements in telegraph and paleophone technology. But lacking financial resources, he was unable to patent his devices before Thomas Edison and others developed the idea and started production.

From the Telegraph to Color Photography

Émile-Hortensius-Charles Cros was born in Fabrezan, Aude, France, 35km to the East of Carcassonne. In 1860, he began studies in medicine, but he soon abandoned them for a life of literary and scientific pursuits. It is referenced that he had designed an automatic telegraph and displayed it at the World Fair of 1867. But, he is much better known for having “almost” invented color photography and sound recording. In 1869 Cros published a theory of color photography in which he proposed that a single scene could be photographed through glass filters colored red, yellow, and blue. The three negatives obtained through those filters could be developed to produce positive impressions that contained varying amounts of the filter’s antichromatic colors green, violet, and orange. The three positive impressions, when superimposed on one another would recompose the original colors of the photographed scene.

Cros’s proposals, which anticipated the subtractive method of modern photography, were similar to more influential ideas advanced about the same time by Louis Ducos du Hauron. The same day, May 7, 1869, Charles Cros and Louis Ducos du Hauron presented their method of creating colour photographs to the French Society of Photography. They had not been in communication beforehand and each knew nothing about the other’s research. Cros ended up conceding the invention to Ducos Du Hauron, despite having sent his paper to the French Academy of Sciences on December 2, 1867. Ducos du Hauron had patented the idea on November 28, 1868, almost a full year later.[2]

In 1869 he published an opuscule entitled “A Study of the Means of Communicating With Other Planets.” It was published as a little brochure and the author sent copies to the Academy of Sciences and the newspapers. Cros was convinced that pinpoints of light observed on Mars and Venus, probably high clouds illuminated by the sun, were the lights of large cities on those planets. He spent years petitioning the French government to build a giant mirror that could be used to communicate with the Martians and Venusians by burning giant lines on the deserts of those planets. He was never convinced that the Martians were not a proven fact, nor that the mirror he wanted was technically impossible to build.[3]

However, Cros is perhaps most famous as the man who almost, but not quite, invented the phonograph. No one before Charles Cros had thought of reproducing sound by making an apparatus capable of registering and reproducing sounds which had been engraved with a diaphragm. He named his invention the Paleophone (voix du passé). On April 30, 1877, three months before Thomas Edison’s invention of the phonograph, Cros submitted a sealed envelope containing a letter to the Academy of Sciences in Paris explaining his proposed method. The letter stated,

“A lightweight index is fixed to the center of figure of a vibrating membrane, it ends with a tip […] based on a blackened surface flame. This surface is integral with a disc driven by a double movement of rotation and linear progression. The system is reversible: when the tip makes ironing in the furrow membrane restores the original acoustic signal.“

In his letter, after having shown that his method consisted of detecting an oscillation of a membrane and using the tracing to reproduce the oscillation with respect to its duration and intensity, Cros added that a cylindrical form for the receiving apparatus seemed to him to be the most practical, as it allowed for the graphic inscription of the vibrations by means of a very fine-threaded screw. However, the Abbé Lenoir, a clergyman–science writer, described the Cros process in an article published in “la semaine du Clergé” on October 10, 1877, giving the name phonographe.[2] Before Cros had a chance to follow up on this idea or attempt to construct a working model, Edison introduced his first working phonograph in the US, who used a cylinder covered in tinfoil for his first phonograph, patenting this method for reproducing sound on January 15, 1878. Edison and Cros apparently did not know of each other’s work in advance.

As a literary figure, Cros frequented the salons of Parisian Symbolists and Décadents. With those devotees of the avant-garde, he aspired to create a type of poetry that, through lyrical, rhythmic language and striking imagery, would succeed in evoking the sensations and emotions of the artist. Befriended with Verlaine and Rimbaud he was known to frequent many of the popular Parisian cafés at the time and in 1873 Charles Cros wrote one of the most beautiful poems relating to absinthe of all times, “Lendemain“, part of his book of poems, “Le Coffret de santal“.

With Flowers, and with Women,
With Absinthe, and with this Fire,
We can divert ourselves a while,
Act out our part in some drama.

Absinthe, on a winter evening,
Lights up in green the sooty soul;
And Flowers, on the beloved,
Grow fragrant before the clear Fire.

Later, kisses lose their charm
Having lasted several seasons;
And after mutual betrayals
We part one day without a tear.

We burn letters and bouquets.
And fire takes our bower;
And if sad life is salvaged
Still there is Absinthe and its hiccups.

The portraits are eaten by flames.
Shrivelled fingers tremble.
We die from sleeping long
With Flowers, and with Women.

Cros’s poetical work brought as little reward and recognition as did his inventions, and he died dispirited and alcoholic. In honour of his contribution to sound recording, the Académie Charles Cros in Paris awards annual prizes for the year’s best musical recordings.[2]