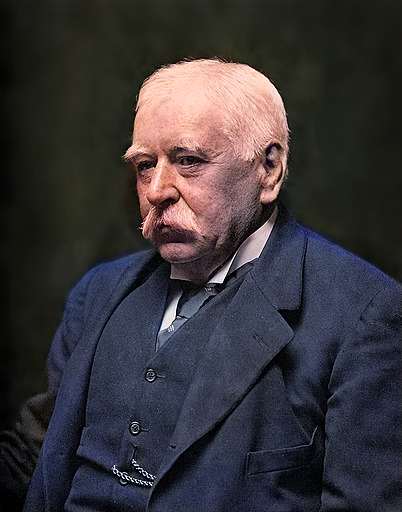 On October 3, 1844, Scottish physician Sir Patrick Manson was born. He made important discoveries in parasitology, and was the founder of the field of tropical medicine. He was the first to identify an insect for the spread of infection.

Patrick Manson was the son of a bank branch manager and grew up in the north-east of Scotland, in the county of Aberdeenshire. He studied medicine at the University of Aberdeen and received his Bachelor of Medicine in 1865. After receiving his Master of Surgery, Manson traveled to Formosa (now Taiwan) in 1866 as a doctor on behalf of the British colonial administration. From 1871 to 1883 he was a medical officer in the British Chinese Imperial Customs Service in Amoy, a port city in southern China. Afterwards he practiced in his own practice in Hong Kong until 1889, where he co-founded a medical school and a medical society in 1887. The Medical School developed into the University of Hong Kong in 1910.

Manson returned to London in 1889. After initially running his own practice, the Colonial Administration appointed him as its Medical Advisor in 1897. He immediately set up a tropical medicine department at Albert Dock Seamen’s Hospital, which in 1899 became the London School of Tropical Medicine (today London School of Hygiene and Tropical Medicine), the oldest tropical institute.

Manson first studied the causes of elephantiasis tropica in China. He found thread-like worms (Wuchereria bancrofti) in lymph nodes of patients, which he was also able to identify in mosquitoes. This was the first time an insect had been identified as a carrier of an infectious disease. Manson then postulated that in the case of malaria, a mosquito was also responsible for the transmission of the pathogen, which Ronald Ross verified in 1898. Manson also discovered the pathogen causing schistosomiasis, which was named Schistosoma mansoni after him. He also discovered the parasite Bothriocephalus mansoni.

Based on his findings in Taiwan and China, Manson continued his studies in London, where he was appointed physician to the Seamen’s Hospital Society. He published his famous malaria hypothesis ‘On the Nature and Significance of the Crescentic and Flagellated Bodies in Malarial Blood’ in 1894 in the British Medical Journal. He explained that mosquitoes supported the parasite development and described the process on how the malaria parasite acquired infectivity towards humans, passing it from person to person. Ronald Ross was then inspired by Manson‘s work and he was later able to discover the life cycle of the malaria parasite. [1]

Manson became the first lecturer in tropical medicine at St George’s and Charing Cross Hospital in London and a member of the Royal Society in 1900. Due to his work in the field of tropical parasitology, he is considered one of the founders of modern tropical medicine and is sometimes referred to as the “father of tropical medicine”. His textbook is still being continued today as the standard work in the field under the name Manson’s Tropical Diseases. The scientist continued publishing works on tropical diseases and received several honors and awards for his achievements including his research on filaria, his discovery of the lung fluke, a parasitic worm in dogs and many more.  Patrick Manson passed away on April 9, 1922 at age 77. [2]