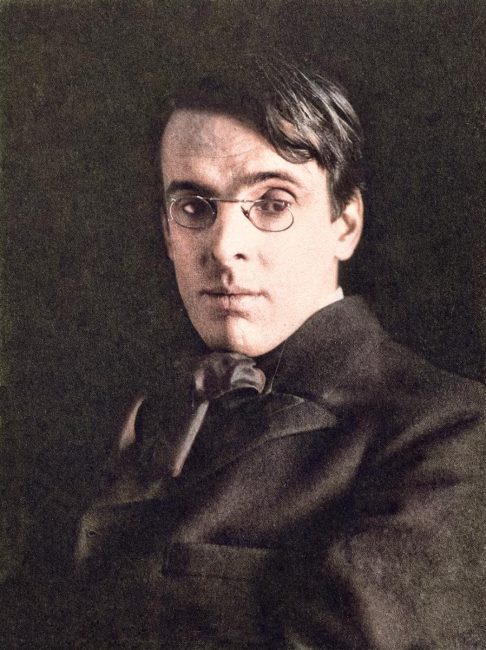 On June 13, 1865, Irish poet William Butler Yeats was born. Yeats was a driving force behind the Irish Literary Revival and has become one of the foremost figures of 20th century literature. In 1923 he was awarded the Nobel Prize in Literature.

“Words are always getting conventionalized to some secondary meaning. It is one of the works of poetry to take the truants in custody and bring them back to their right senses.”
– William Butler Yeats, Letter to Ellen O’Leary (3 February 1889)

William Butler Yeats was born in Sandymount, County Dublin, Ireland to John Butler Yeats, a lawyer and a well-known portrait painter. Yeats was educated in London and in Dublin, but he spent his summers in the west of Ireland in the family’s summer house at Connaught. The young Yeats was very much part of the fin de siècle in London; at the same time he was active in societies that attempted an Irish literary revival. He spent his childhood in County Sligo and in London. He returned to Dublin at the age of fifteen to continue his education and study painting, but quickly discovered he preferred poetry. Born into the Anglo-Irish landowning class, Yeats became involved with the Celtic Revival, a movement against the cultural influences of English rule in Ireland during the Victorian period, which sought to promote the spirit of Ireland’s native heritage.

The Isle of Statues and The Ghost Club

At a young age he was reading Dante Alighieri, William Shakespeare, John Donne and the works of William Blake and Percy Bysshe Shelley, recommended by his father and inspiration for his own creativity. A devoted patriot, Yeats found his voice to speak out against the harsh Nationalist policies of the time. 1885 was an important year in Yeats’s early adult life, marking the first publication, “The Isle of Statues“, a fantasy work that took Edmund Spenser for its poetic model in the Dublin University Review,and the beginning of his important interest in occultism. He read extensively on the subjects throughout his life, became a member of the paranormal research organisation “The Ghost Club“ and was especially influenced by the writings of Emanuel Swedenborg.[7] Also in 1885, Yeats met John O’Leary, a famous Irish patriot who had returned to Ireland after twenty years of imprisonment and exile for revolutionary nationalistic activities. O’Leary had a keen enthusiasm for Irish books, music, and ballads, and he encouraged young writers to adopt Irish subjects. Yeats, who had preferred more romantic settings and themes, soon took O’Leary’s advice, producing many poems based on Irish legends, Irish folklore, and Irish ballads and songs.

“We can make our minds so like still water that beings gather about us that they may see, it may be, their own images, and so live for a moment with a clearer, perhaps even with a fiercer life because of our quiet.”
– William Butler Yeats, “Earth, Fire and Water” from The Celtic Twilight (1893)

In 1889, Yeats published The Wanderings of Orisin, based on the lyrics of the Fenian Cycle of Irish mythology and displays the influence of both Sir Samuel Ferguson and the Pre-Raphaelite poets. The Wanderings of Orisin was his first and probably the most extensive work, as he never attempted another. The poem was largely based upon the struggle of life, a theme that would frequently appear in his future works. During this period, he also wrote Poems (1895), The Secret Rose (1897) and The Wind Among the Reeds (1899). In 1885, Yeats became a co founder of the Dublin Hermetic Order and as a result, was made its chairman. At that time, he was also involved in the Theosophical Society and with Hermeticism.

In 1894 Yeats became involved with the Irish Literary Theatre, later becoming its chief playwright, with many of his plays being performed there and at the Abbey Theatre, also known as the National Theatre of Ireland which opened in 1904. Yeats continued to publish throughout his life, and through the Cuala Press which he founded with his sisters in 1904, was also responsible for the publication of many other authors such as Ezra Pound. In 1889, Yeats met Maud Gonne, a poet, feminist and a fervent nationalist. Yeats became increasingly passionate about her who became his muse and source of unrequited love. He proposed marriage to her at least three times; in 1899, 1900 and 1901 and was rejected each time which was probably a result of his lack of enthusiasm to contribute in the revolutionary movement. In 1917, Yeats married a friend George Hyde Lees whom he had met in 1911 at the age of 51. She shared Yeats’ interest in mystical and esoteric subjects and helped him with the automatic writing. Despite a huge age difference the marriage proved happy and the couple had two children.

Yeats was elected an Irish senator in 1922, a post he filled until his retirement in 1928. He received the Nobel Prize in Literature in 1923. His acceptance of the role and its responsibilities had been foreshadowed (predicted) in his poems Responsibilities (1914). The outbreak of civil war in Ireland in 1922 had heightened his conviction that the artist must lead the way through art, rather than through politics. In December 1923, Yeats was awarded the Nobel Prize in Literature, and was determined to make the most of the occasion. Yeats used the occasion of his acceptance lecture at the Royal Academy of Sweden to present himself as a standard-bearer of Irish nationalism and Irish cultural independence. Yeats died in Roquebrune, France, on January 28, 1939, where he had retired there because of ill health. He had the lines of one of his poems engraved on his tombstone in Ireland: “Cast a cold eye / On life, on death. / Horseman, pass by!“