You are here: Home › mathematics › Andrey Markov and the Markov Chains 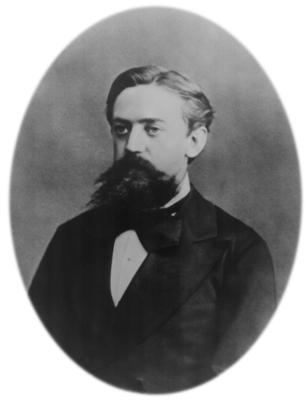 On June 14, 1856, Russian mathematician Andrey (Andrei) Andreyevich Markov was born. He is best known for his work on stochastic processes. A primary subject of his research later became known as Markov chains and Markov processes, i.e. sequences of random variables in which the future variable is determined by the present variable but is independent of the way in which the present state arose from its predecessors.

I guess, as long as you are not a computer scientist, economist, or mathematician, you might have never heard of Markov chains. Just imagine some kind of system that changes constantly its state, as e.g. the stock market, the web (in terms of page rank), or in biology population processes. Markov chains model a random process that changes from one state into another state, but with a special property: the process is memoryless, i.e. the current state of the process only depends on the last recent state. All previous states are not taken into consideration and do not influence the current state. Of course this does not hold for all kind of stochastic processes, but it is often a good approximation and a (more or less) efficient simplification. The term “Markov chain” refers to the sequence of random variables such a process moves through, with the Markov property defining serial dependence only between adjacent periods. But let’s have a closer look at the namesake: Andrey Markov.

Andrey Markov was born in Ryazan as the son of the secretary of the public forest management of Ryazan, Andrey Grigorevich Markov, and his first wife Nadezhda Petrovna Markova. In his early years Markov was in poor health and up to the age of ten he could only walk with the assistance of crutches. Nevertheless, when he attended secondary school at St Petersburg Gymnasium No 5 he already showed outstanding talents for mathematics but performed rather poorly in other subjects. He wrote his first mathematics paper while at the Gymnasium and it was clear that mathematics was the right subject for Markov to study at university. In 1874, he entered the Physics and Mathematics Faculty of St Petersburg University and attended lectures by Pafnuty Chebyshev, which were particularly stimulating to Markov.[1]

In 1877, Markov was awarded a gold medal for his outstanding solution of the problem About Integration of Differential Equations by Continuous Fractions with an Application to the Equation. During the following year, he passed the candidate’s examinations, and he remained at the university to prepare for a lecturer’s position. In 1880, Markov defended his master’s thesis and five years later, in January 1885, there followed his doctoral thesis “About Some Applications of Algebraic Continuous Fractions“. In 1883, Markov married his childhood sweetheart, the daughter of the owner of the estate that his father managed. In 1886, one year after the defense of his doctoral thesis, Markov was appointed extraordinary professor. In 1890, after the death of Viktor Bunyakovsky, Markov became an extraordinary member of the academy. His promotion to an ordinary professor of St. Petersburg University followed in the fall of 1894.

Chebyshev proposed Markov as an adjunct of the Russian Academy of Sciences in 1886. He was elected as an extraordinary member in 1890 and an ordinary academician in 1896. He formally retired in 1905 but continued to teach for most of his life. Markov’s early work was mainly in number theory and analysis, algebraic continued fractions, limits of integrals, approximation theory and the convergence of series. After 1900 Markov applied the method of continued fractions, pioneered by his teacher Pafnuty Chebyshev, to probability theory. Markov also studied sequences of mutually dependent variables, hoping to establish the limiting laws of probability in their most general form. He proved the central limit theorem under fairly general assumptions. As early as 1812 the French mathematician Pierre-Simon Laplace had formulated the first central limit theorem, which states that probabilities for almost all independent and identically distributed random variables converge rapidly to the area under an exponential function. In 1887, Pafnuty Chebyshev outlined a proof of a generalized central limit theorem.[6] In 1909, Markov succeeded in proving the general result rigorously using Chebyshev’s method. He extended both the law of large numbers (which states that the observed distribution approaches the expected distribution with increasing sample size) and the central limit theorem to certain sequences of dependent random variables forming special classes of what are now known as Markov chains [2] for which he is particularly remembered and which founded a completely new branch of probability theory and launched the theory of stochastic processes. In 1923 Norbert Wiener became the first to treat rigorously a continuous Markov process. The foundation of a general theory was provided during the 1930s by Andrei Kolmogorov.[1,3,4]

Andrey Markov lived through a period of great political activity in Russia and, having firm opinions, he became heavily involved. In connection with student riots in 1908, professors and lecturers of St. Petersburg University were ordered to monitor their students. Markov refused to accept this decree, and he wrote an explanation in which he declined to be an “agent of the governance“. Markov was removed from further teaching duties at St. Petersburg University, and hence he decided to retire from the university.

The February Revolution of 1917

Although he was an atheist, Andrey Markov protested Leo Tolstoy’s excommunication from the Russian Orthodox Church in 1912 by requesting his own excommunication. The Church complied with his request. In 1913, the council of St. Petersburg elected nine scientists honorary members of the university, but the minister of education refused to affirm Markov until four years later, after the February Revolution in 1917. Markov then resumed his teaching activities and lectured on probability theory and the calculus of differences until his death in 1922.