You are here: Home › communication › Oliver Lodge and the Development of Radio Technology 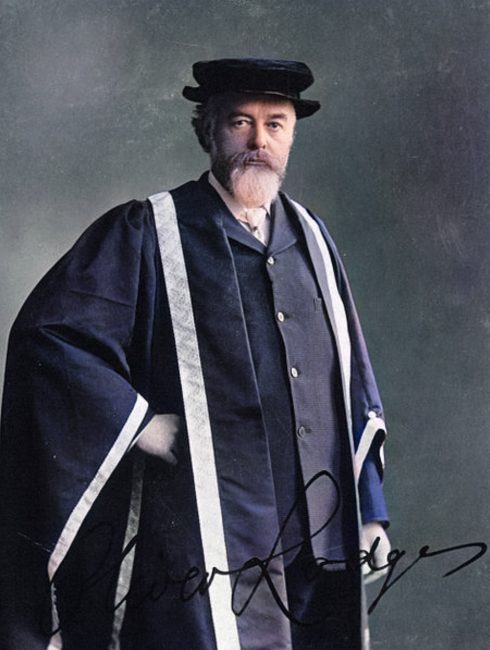 On June 12, 1851, British physicist Sir Oliver Joseph Lodge was born. Lodge was involved in the development of, and holder of key patents for radio. He identified electromagnetic radiation independent of Hertz‘ proof and at his 1894 Royal Institution lectures, Lodge demonstrated an early radio wave detector he named the “coherer“.[4]

“Men of Science would do well to talk plain English. The most abstruse questions can very well be discussed in our own tongue … I make a particular appeal to the botanists, who appear to delight in troublesome words.”
— Sir Oliver Joseph Lodge, Speaking at the closing session of the Annual Congress of the British Association for the Advancement of Science quoted in [9]

Oliver Lodge was born in 1851 at ‘The Views’, Penkhull, then a rural village high above the emerging Potteries of North Staffordshire, UK, to Oliver Lodge (1826–1884) – later a ball clay merchant at Wolstanton, Staffordshire – and his wife, Grace, née Heath. Oliver joined his father’s business at the age of fourteen, becoming an agent selling Purbeck blue clay to the potteries, traveling as far as Scotland. After a few years, Lodge was able to attend physics lectures in London and attend the local Wedgwood Institute. In 1875, Oliver Lodge earned his Bachelor of Science degree and two years later his doctorate. At the University College, Liverpool, Lodge was appointed professor of physics and mathematics. He became the first principal of the new Birmingham University and remained there until his retirement.

Experiments on Lightning and Ether Waves

Lodge studied “A Treatise on Electricity and Magnetism” which was published by J.C. Maxwell in 1873.[5] However, he was fairly limited in mathematical physics both by aptitude and training and his first two papers were a description of a mechanism (of beaded strings and pulleys) that could serve to illustrate electrical phenomena such as conduction and polarization. In the late 1870s, Oliver Lodge became interested in generating and detecting electromagnetic waves. First, he intended to general light waves with their very high frequencies rather than radio waves with their much lower frequencies. Further, one of his friends George FitzGerald incorrectly assured him that “ether waves could not be generated electromagnetically.” One decade later, asked by the Royal Society of Arts, Lodge gave a series of lectures on lightning. This included why lightning rods and their conducting copper cable sometimes didn’t work, with lightning strikes following alternate paths, going through structures instead of being conducted by the cables. The scientist found that the charge would take a shorter high resistance route jumping a spark gap instead of taking a longer low resistance route through a loop of copper wire. He presented his results showing what he thought was the effect of inductance on the path lightning would take in May 1888.

While on summer vacation Lodge learned that Heinrich Hertz in Germany had been conducting his own electromagnetic research and published a series of papers proving the existence of electromagnetic waves and their propagation in free space.[4] Lodge presented his own paper on electromagnetic waves along wires in September 1888 at the British Science Association meeting in Bath, England, adding a postscript acknowledging Hertz’s work and saying: “The whole subject of electrical radiation seems working itself out splendidly.”

During a memorial lecture on the work of the recently deceased Heinrich Hertz, Oliver Lodge set up a demonstration on the quasi optical nature of Hertzian waves (radio waves) and demonstrated their similarity to light and vision including reflection and transmission. During the same year, Lodge performed similar experiments, increasing the distance of transmission up to 55 meters. He used a detector called a coherer, which was invented by Edouard Branly). Lodge further used a glass tube containing metal filings between two electrodes. When the small electrical charge from waves from an antenna were applied to the electrodes, the metal particles would cling together or “cohere” causing the device to become conductive allowing the current from a battery to pass through it. In his setup hte impulses from the coherer were picked up by a mirror galvanometer which would deflect a beam of light being projected on it, giving a visual signal that the impulse was received. The coherer’s metal filings were then broken apart by manually operated vibrations of a bell placed on the table near by that rang every time a transmission was received.

After his retirement in 1920, Lodge and his wife settled in Normanton House, near Lake in Wiltshire, just a few miles from Stonehenge. Oliver Lodge died on 22 August 1940, at age 89.