You are here: Home › chemistry › Willard Frank Libby and the Radiocarbon Dating 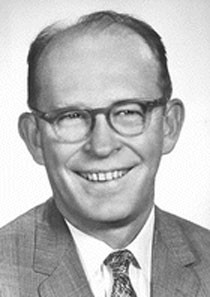 On December 17, 1908, American physical chemist Willard Frank Libby was born. Libby is best known for his role in the 1949 development of radiocarbon dating, a process which revolutionized archaeology and palaeontology. For his contributions to the team that developed this process, Libby was awarded the Nobel Prize in Chemistry in 1960.

Willard Frank Libby was born among two siblings in Grand Valley, Colorado, the son of farmers Ora Edward Libby and his wife Eva May. At age five, Libby’s parents moved to Santa Rosa, California, where he attended Analy High School, in Sebastopol, from which he graduated in 1926. In 1927 he entered the University of California at Berkeley, where he received his B.S. in 1931, and his Ph.D. in 1933, with a doctoral thesis on the “Radioactivity of ordinary elements, especially samarium and neodymium: method of detection” under the supervision of Wendell Mitchell Latimer. Independently of the work of George de Hevesy and Max Pahl, he discovered that the natural long-lived isotopes of samarium primarily decay by emission of alpha particles.

In 1933, Libby was appointed Instructor in the Department of Chemistry at the University of California, and became an assistant professor of Chemistry there in 1938. He spent the 1930s building sensitive Geiger counters [4] to measure weak natural and artificial radioactivity. However, Libby was the first ever to set up a Geiger counter in the U. S. In 1941, Libby was awarded a Guggenheim Fellowship, and elected to work at Princeton University

On December 8, 1941, the day after the Japanese attack on Pearl Harbor, Libby volunteered his services to Nobel Prize laureate Harold Urey to join him at Columbia University to work on the Manhattan Project, the wartime project to develop atomic bomb, at what became its Substitute Alloy Materials (SAM) Laboratories.[5] Libby worked on the gaseous diffusion process for uranium enrichment. Through 1942, Libby and his team studied different barriers and the means to protect them from corrosion from the uranium hexafluoride. The most promising type was a barrier made of powdered nickel developed by Edward O. Norris of the Jelliff Manufacturing Corporation and Edward Adler from the City College of New York, which became known as the “Norris-Adler” barrier.

In addition to developing a suitable barrier, the SAM Laboratories also had to assist in the design of a gaseous separation plant, which became known as K-25. Libby helped with the engineers from Kellex to produce a workable design for a pilot plant. K-25 commenced operation in February 1945, and as cascade after cascade came online, the quality of the product increased.

After the war, Libby accepted an offer from the University of Chicago of a professorship in the Chemistry Department at the new Institute for Nuclear Studies. He returned to his pre-war studies of radioactivity. In 1939, Serge Korff had discovered that cosmic rays generated neutrons in the upper atmosphere. These interact with nitrogen-14 in the air to produce carbon-14. The half-life of carbon-14 is 5,730±40 years. Libby realized that when plants and animals die they cease to ingest fresh carbon-14, thereby giving any organic compound a built-in nuclear clock. He published his theory in 1946, and expanded on it in his monograph Radiocarbon Dating in 1955.

He also developed sensitive radiation detectors that could use the technique. Tests against sequoia with known dates from their tree rings showed radiocarbon dating to be reliable and accurate. The technique revolutionised archaeology, palaeontology and other disciplines that dealt with ancient artefacts. Libby also dated linen wrappings from the Dead Sea Scrolls, bread from Pompeii buried in the eruption of Vesuvius (ad 79),[6] charcoal from a Stonehenge campsite, and corncobs from a New Mexico cave, and he showed that the last North American ice age ended about 10,000 years ago, not 25,000 years ago as previously believed by geologists.[2]

In 1960, Willard Frank Libby was awarded the Nobel Prize in Chemistry “for his method to use carbon-14 for age determination in archaeology, geology, geophysics, and other branches of science“. He also discovered that tritium similarly could be used for dating water, and therefore wine. Atomic Energy Commission (AEC) Chairman Gordon Dean appointed Libby to its influential General Advisory Committee (GAC) in 1950. In 1954, he was appointed an AEC commissioner by President Dwight D. Eisenhower.

Libby has performed a wide range of scientific advisory and technical consultant work with industrial firms associated with the Institute for Nuclear Studies, as well as with defense departments, scientific organizations and universities.[1] During the late 1950s, Libby and physicist Edward Teller, both committed to the Cold War and both prominent advocates of nuclear weapons testing, opposed Nobel chemistry and peace laureate Linus Pauling’s petition for a ban on nuclear weapons. To prove the survivability of nuclear war, Libby built a fallout shelter at his house, an event that was widely publicized. [2] Libby resigned from the AEC in 1959, he became Professor of Chemistry at University of California, Los Angeles (UCLA), a position he held until his retirement in 1976.

Willard Frank Libby died in Los Angeles on on September 8, 1980, from a blood clot in his lung complicated by pneumonia at age 71.