You are here: Home › women in science › Margaret Mead and Modern Anthropology 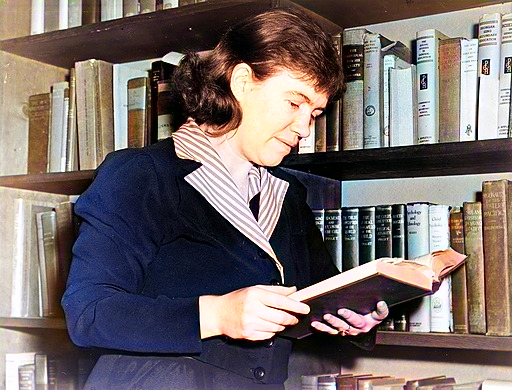 On December 16, 1901, American cultural anthropologist Margaret Mead was born. She was both a popularizer of the insights of anthropology into modern American and Western culture and a respected, often controversial, academic anthropologist. Her reports about the attitudes towards sex in South Pacific and Southeast Asian traditional cultures amply informed the 1960s sexual revolution.

“Maggie was a short little lady with immense courage-a first of a kind-took nothing for granted and wrote copiously of her field experience. She could be disarmingly friendly one minute and put you in your place the next” (Andrew Whiteford, Ph.D., 1999)

Margaret Mead grew up with four siblings in a household of liberal social scientists. She studied at Columbia University under Franz Boas and Ruth Benedict. Although Mead’s father was himself an academic teacher and had very liberal views, he initially did not want to allow his daughter to study. With the help of her mother, however, she finally succeeded in studying psychology and anthropology. She majored at Barnard in psychology and continued her academic career at Columbia in order to earn her doctorate. She wrote her thesis about cultural stability in Polynesia and traveled at the age of only 23 by herself to Samoa. In doing so, she held that the social roles that had been considered rigid until then were culturally predetermined and not – as had been generally assumed until then – universally valid for all people. Her stays resulted in two major works, Coming of Age in Samoa, published in 1928 and The Social Organization of Manu’a, published in 1930. Especially the first work, in which she focused on adolescent girls, was highly discussed in the field of anthropology and beyond.

In the years between 1928 and 1930, the young anthropologist traveled to New Guinea, where she studied the play and imaginations of younger children and the way they were shaped by adult society. Her studies were published for instance in the work Growing Up in New Guinea. Mead continued working among three groups, the Tchambuli, the Mundugumor, and the Arapesh, which resulted in the controversial works Sex and Temperament in Three Primitive Societies, published in 1935 and The Mountain Arapesh. In the following years, Mead worked in Bali, the Netherlands, and the East Indies and published further works. [2,3] Coming of Age in Samoa

Mead’s best seller was probably her work Coming of Age in Samoa and it has been translated in several languages. In it, Mead argued that that individual experiences of developmental stages could be shaped by cultural demands and expectations, which means that the sexual developments could be more or less problematic in other cultures. While working in New Guinea, Mead stated that primitive people were not behaving like children, as previous works suggested. She explained that the different developmental stages needed to be studied in a cross-cultural perspective. In New Guinea, Mead also intended to demonstrate differences in gender roles in other societies and she always suggested to connect all aspects of human life in order to learn from cultures. For instance, she explained that research on a culture’s food production needed to be connected with the study of rituals and beliefs. Margaret Mead concluded from her studies, that “ diversity is a resource, not a handicap” and that cultures needed to learn from each other better. [3]

During World War II, she had to interrupt her research trips to the South Seas, but this did not deter her from further research activities. Together with Ruth Benedict, she early on applied anthropological and ethnological methods to the study of modern cultures. On behalf of the U.S. Office of War Information and Propaganda, they worked in particular on Japanese culture. Mead worked for the Office of Strategic Services (forerunner of the CIA) and took part in training courses in this regard together with Kurt Lewin. During World War II, Mead’s task was to work out criteria for the Allies for the subsequent occupation of Germany.

Unfortunately, Margaret Mead and some of her field studies were highly criticized posthumously, especially her early work on Samoa. Most notably in this case is the anthropologist Derek Freeman, who questions her conclusions on the Samoan norms of sexuality in his work Margaret Mead and Samoa: The Making and Unmaking of an Anthropological Myth, published in 1983. In the years after his publication, most scientists who also studied the Samoans agreed mostly with Freeman. [1,11]

However, Margaret Mead is regarded as one of the most famous and respected anthropologist and one of the most famous American scientists. She was awarded the Presidential Medal of Freedom posthumously by U.S. President Carter as well as the Kalinga Prize for the Popularization of Science in 1970. Next to her field studies and her teaching at various Universities across the United States, the young anthropologist was appointed assistant curator of ethnology of the American Museum of Natural History in New York, where she added around three thousand items to the Museum’s inventory, planned several dioramas, made hundreds of photographs and several films. [2]