You are here: Home › engineering › Whitcomb L. Judson and the Invention that holds our life ‘together’ 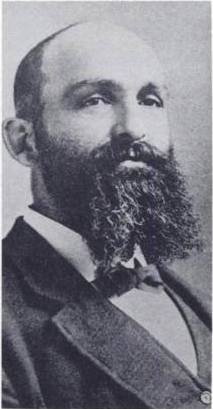 On August 29, 1893, American machine salesman, mechanical engineer and inventor Whitcomb L. Judson receives the patent for a “Clasp Locker”, today better known as the zipper, the mechanical little wonder that has kept so much in our lives ‘together.’ But first, the new invention showed only little commercial success. It took almost 80 years that the magazine and fashion industry made the novel zipper the popular item it is today.

Born in Chicago, Illinois, U. S., Whitcomb Judson spent his most young life in Illinois. He served the Union Army and attended Knox College in his hometown Galesburg, Illinois. He later moved to Minnesota to become a traveling salesman. However, he has been inventing more or less useful things from the mid 1880s on. First, he focused on the ‘pneumatic street railway’. The concept was similar to the cable railway system but with pistons suspended beneath the railcar. Similar systems were tried throughout the nineteenth century, however, they all failed because of sealing problems. Judson’s concept had a demonstration line in 1890 in Washington, D.C. for about a mile. However, it ran for only a few weeks before they shut it down due to technical problems. A cable streetcar firm bought them out and turned it into an electric streetcar since Judson’s system was mostly impractical.

Before the zipper could begin its triumphal march, items of clothing were held together with cords, ribbons, neckbands, fibulae, gag and buttons as well as hooks and eyelets. The zipper was developed by several inventors in 1851. Elias Howe‘s patented automatic, uninterrupted clothing fastener, patented in 1851, has not yet found practical use.[4] The first practicable idea for it had Whitcomb Judson in 1890; he applied for a patent in 1892 and 1893. 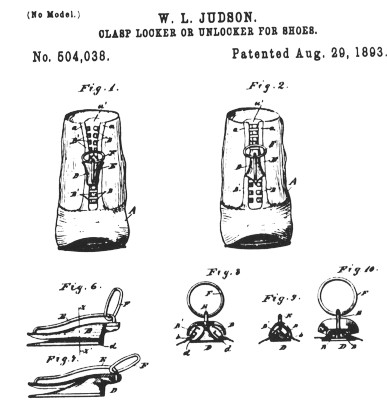 Throughout 16 years of inventing, Judson managed to file about 30 patents, one being the chain-lock fastener. It was the previous edition to our modern zipper and was developed in 1890. But Judson not only invented the zipper itself, but also a clasp locker system, automatically producing his fastener without high costs.

At first, he applied the zipper on shoes but already thought of gloved, corsets, and bags. His intention was originally to get rid of the boredom while fastening high button boots. his patent was filed in 1893 after long disputes with the examiner. Luckily the World’s Fair was held in Chicago the same year where Judson presented his innovation with moderate success. He then launched the Universal Fastener Company to manufacture his new invention, together with Harry L. Earle and Lewis Walker. The Universal Fastener Company first started out in Chicago moving to various locations later on. The name changed eventually to Automatic Hook and Eye Company. Still, Judson never saw a massive success of his early zipper model during his lifetime.

It was not until 1912 that the Swede Gideon Sundbäck, thanks to a number of improvements, satisfied his customers after having patented his ideas in Germany for the first time in 1909. In 1923 Martin Othmar Winterhalter from St. Gallen (Switzerland) acquired the patent for Europe, further developed the closure originally consisting of beads and clamping jaws and replaced it with the ribs and grooves still common today. Later on, more inventors became curious about the zipper and built own improvements. In the 1920s, the U.S. Navy used these for their flying suits and right after, every imaginable kind clothing was equipped with Judson’s invention. It was also in the 1920s when the term ‘zipper’ was officially coined by the B. F. Goodrich company. The general conversion into everyday clothing began in 1925 and 1935. Since then, zippers have replaced buttons in many areas of textiles.