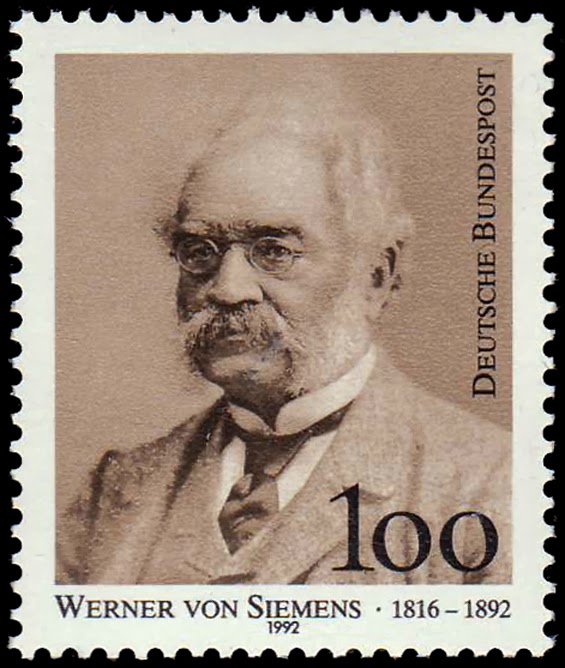 On December 13, 1816, German inventor and industrialist Werner von Siemens was born. He was the pioneer of the electro industry and brought about a great technological advancement with many of his important discoveries. Moreover, he was co-inventor of an electroplating process and alone developed an electric dynamo. He laid the first telegraph line and built the first electric railway in Germany and, with his brother Sir William Siemens, developed a widely used process of steelmaking.

“My aim is to create “an enterprise of world standing comparable of that of Fugger.”
– Werner von Siemens, as quoted in [11]

Werner Siemens – the “von” was added in 1888 – was born in Lenthe, near Hannover, in the Kingdom of Hanover in the German Confederation as the fourth child (of fourteen) of a tenant farmer. The family’s tight financial situation precluded the formal schooling appropriate to upper middle-class ambitions. For this reason, Werner von Siemens had to leave “Gymnasium” without taking the final exams in 1834. He had to give up his original intention to study at the Bauakademie Berlin and instead chose to join the Prussian Military Academy’s School of Artillery and Engineering, between the years 1835-1838, instead, where he received his officers training.

Siemens’ three-year training at the artillery and engineering school in mathematics, physics and chemistry. created a solid basis for his future work in the electrical engineering field. He received various medals and invented electrically-charged sea mines. Moreover, the army was particularly interested in rapid, reliable communication. Thus, Siemens invented a telegraph that used a needle to point to the right letter, instead of using Morse code. His telegraph proved to be absolutely reliable and far superior to previous equipment. Based on this invention, he founded the company Telegraphen-Bauanstalt von Siemens & Halske on 1 October 1847, which prospered rapidly, carrying out large telegraphic projects and expanding into other electrical fields as new applications of electricity were developed. Werner and his brother Carl established subsidiary factories in London, St. Petersburg, Vienna, and Paris. Werner von Siemens’ continued research efforts and his inventions in electrical engineering resulted in many new products. His use in 1847 of gutta-percha to insulate telegraphic cables against moisture was later widely applied to electric-light cables and also made the first underground and submarine telegraph cables possible. Under Werner’s direction, the firm of Siemens & Halske laid cables across the Mediterranean and from Europe to India.

“Technology has been given the means at present to generate electric powerof unlimited strenght inexpensively and easily wherever labor is available.”
– Werner von Siemens as quoted in [11]

Apart from the pointer telegraph Werner von Siemens made several contributions to the development of electrical engineering and is therefore known as the founding father of the discipline in Germany. He built the world’s first electric elevator in 1880. His company produced the tubes with which Wilhelm Conrad Röntgen investigated x-rays.[5] He claimed invention of the dynamo although others, as e.g. the Hungarian Anyos Jedlik in 1827 or the French instrument maker Hippolyte Pixii in 1832, invented it already earlier. In 1877 he received a German patent for an electromechanical “dynamic” or moving-coil transducer, which was later adapted for the Bell System for use as a loudspeaker in 1929. Siemens is also the father of the trolleybus which he initially tried and tested with his “Elektromote” in 1882. Following his industrial career, Werner von Siemens was ennobled in 1888. He retired from his company in 1890 and died in 1892 in Berlin.

At yovisto academic video search you can learn more about electromagnetic induction, the basic principle of Siemens’ electrical dynamo, in the lecture of famous MIT Prof Walter Lewin on ‘Electromagnetic Induction’.