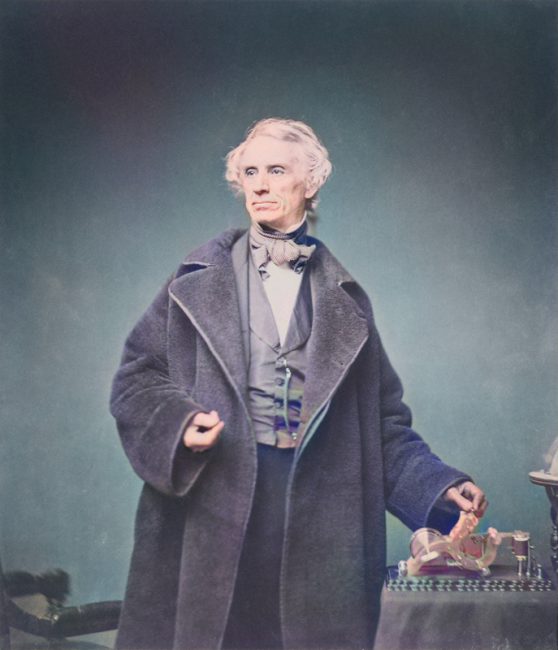 On May 24th 1844 the first Morse telegram went over the line. Samuel Morse and his colleague Alfred Vail knew that the very first phrase to be sent with the new telecommunication medium was to be remembered. So what should they transmit? Morse came up with a quote from the bible, certainly well chosen for an historic occasion like this:

“What God had wrought”

sent by Morse in Washington to Alfred Vail at the Baltimore and Ohio Railroad “outer depot” in Baltimore. The message is a Bible verse from Numbers 23:23, chosen for Morse by Annie Ellsworth, daughter of the Governor of Connecticut. The original paper tape received by Vail in Baltimore is on display in the Library of Congress in Washington, D.C.

Samuel F. B. Morse was born in Charlestown, Massachusetts, the first child of the pastor Jedidiah Morse, who was also a geographer, and his wife Elizabeth Ann Finley Breese. After attending Phillips Academy in Andover, Massachusetts, he graduated from Yale College (now Yale University). While at Yale, he also attended lectures on electricity with Benjamin Silliman sr. and Jeremiah Day.[3] He earned part of his college fees by painting miniatures, which he sold for $5 apiece. Here he also met some of the best and brightest minds in America, such as John C. Calhoun, Washington Irving, and James Fenimore Cooper.He graduated from Yale in 1810. At the end of 1811 Morse was accepted into the Royal Academy in London, where he immediately fell for neo-classical art, especially Michelangelo and Raphael. He studied and drew anatomy according to models and produced his masterpiece: a clay model “The Dying Hercules“, based on the Laocoon in pose and muscles. The sculpture won the Society of the Arts First Prize. In 1815 he returned to America. 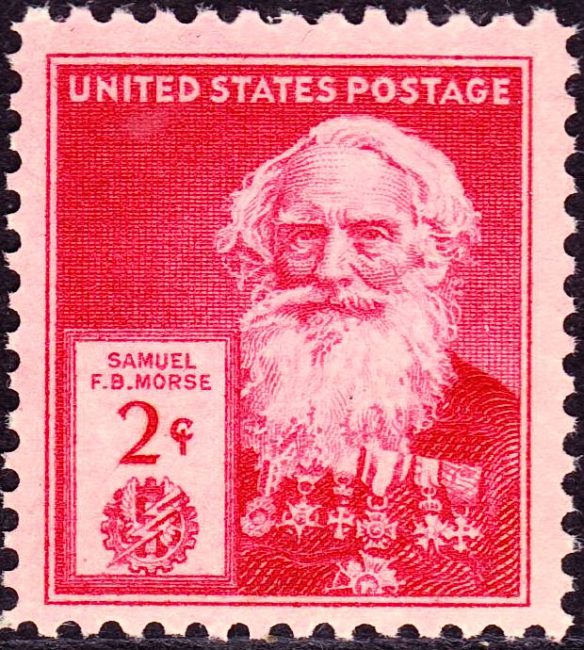 Morse was honored on the US Famous Americans Series postal issue of 1940.

Morse struggled poorly with portraits. He only got $15 for one portrait. Lacking both institutional support and private patronage in the American art scene, Morse was forced to adjust his grand plans and soon realized that painting portraits was the only genre that could be sold well. After traveling through New Hampshire and Vermont as a portrait painter, he lived for a while in Charleston, South Carolina, and finally settled in New York City. In 1825 Morse pioneered the formation of the New York Drawing Association and in the following year was one of the founders of the National Academy of Design in New York; he also became its first president (1826-1845). There, he also gave his lectures on painting. In 1829 he sailed to Europe and travelled to England, France and Italy. He visited Paris and the Musée du Louvre for the first time. In the same year he was appointed first professor of art history at New York University.

Interest in Chemical and Electrical Experiments

On his return journey in autumn 1832 on the SS Sully to New York, Charles Thomas Jackson entertained the passengers with his electrical devices, such as an electromagnet from Hippolyte Pixii and galvanic cells. It was discussed to use electricity for signaling. At about the same time Morse became interested in chemical and electrical experiments. 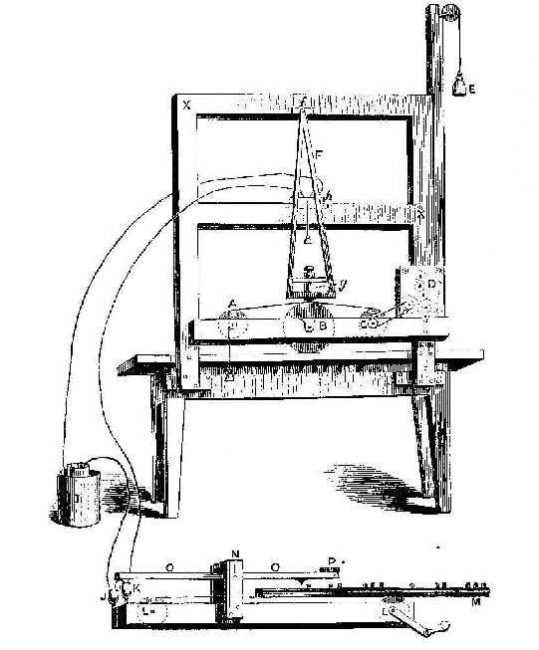 Beginning in 1836, Samuel F. B. Morse and Alfred Vail developed an electric telegraph, which sent pulses of electrical current to control an electromagnet that was located at the receiving end of the telegraph wire. The technology available at the time made it impossible to print characters in a readable form, so the inventors had to devise an alternate means of communication. As Morse was a professor of painting and sculpture, it comes as no surprise that his first telegraph emerged from an easel. A pendulum with a pin was suspended from the frame. Below the pendulum a clockwork pulled a rolled up piece of paper. As long as no current flowed through the electromagnet, the pen drew a straight line. But as soon as current flowed, a magnet attracted the writing pendulum and on the paper a V-shaped point was formed. Each tine stood for a number. At the first demonstration, the paper strip said: “214-36-2-58-112-04-01837”. This meant a successful attempt with Telegraph September 4, 1837.

These first attempts were seen by the student Alfred Vail, who became a technically skilled employee of Morses and persuaded his father to invest 2,000 dollars in development work. On 23 September 1837, he had already formed a partnership with Vail, which obliged him to build a series of telegraph instruments at his own expense and to file patents for them. In return, Vail was assured by Morse ¼ of the shares in the revenues from the patents in the United States and half of those abroad. Under Vail’s influence, Morse gave up the number code. The paper strip now had short and long pendulum deflections. Without the connecting lines this was already the later Morse code composed of dots and bars. The transmission was made with a contact panel into which short and long copper plates were inserted. If you now stroke with an electrically conductive pin over the plates embedded next to a letter, a short or long current surge was induced in the line.

After five years of experimentation, Morse was able to patent his apparatus. The United States Patent Office granted him the certificate on June 20, 1840. On March 3, 1843, Congress approved $30,000 for the construction of the 60 km long telegraph line from Baltimore, Maryland, to Washington D. C. In the spring of 1844, they began construction of above-ground lines on telegraph poles. On 24 May 1844, Samuel Morse telegraphed the first electronic message via his morse alphabet via this line.

When the current was interrupted, the electromagnet retracted the stylus, and that portion of the moving tape remained unmarked. The Morse code was developed so that operators could translate the indentations marked on the paper tape into text messages. In his earliest code, Morse had planned to only transmit numerals, and use a dictionary to look up each word according to the number which had been sent. However, the code was soon expanded to include letters and special characters, so it could be used more generally. The shorter marks were called “dots”, and the longer ones “dashes”, and the letters most commonly used in the English language were assigned the shortest sequences.

Hunter Cobb, Pat Ruckert, Samuel Morse and the Dawn of the Electrical Age, [8]