You are here: Home › mathematics › Ivan Matveevich Vinogradov and the Goldbach Conjecture 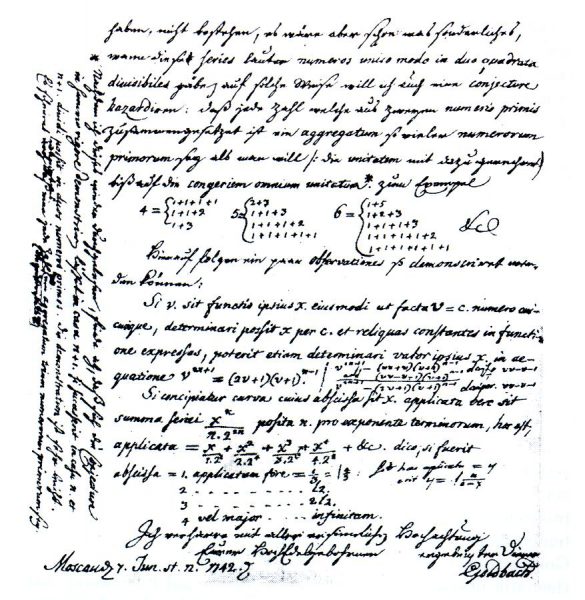 On September 14, 1891, Soviet mathematician Ivan Matveevich Vinogradov was born. Vinogradov is best known for his contributions to the analytical theory of numbers, including a partial solution of the Goldbach conjecture proving that every sufficiently large odd integer can be expressed as the sum of three odd primes.

Ivan Matveevich Vinogradov was born to Matvei Avraam’evich Vinogradov, a priest in Milolyub, a village in the Velikie Luki district of the Pskov province of Russia. By 1903 Ivan’s father was a priest at the Church of the Holy Shroud in Velikie Luki, where Ivan attended school from 1903 to 1910. He entered the faculty of Mathematics and Physics at the University of St. Petersburg in 1910 under A. A. Markov and Ya. V. Uspenskii, who both had an interest in probability and number theory and should influence Vinogradov’s interest.[6] He graduated B.A. in 1914 with a work on the distribution of quadratic residues and non-residues, and was awarded a masters degree in 1915.

Vinogradov was very single minded in his approach to mathematics and succeeded to press ahead with deep research despite the difficulties arising first from World War I. He taught at the State University of Perm, founded in 1916, originally as a branch of the University of St. Petersburg, from 1918 to 1920, and in 1920 he became a Professor at the St Petersburg Polytechnic Institute as well as docent at the St. Petersburg University. In 1925, he was promoted to professor at the university, becoming head of the probability and number theory section.

From 1934 on he was the first Director of the Steklov Mathematical Institute at the USSR Academy of Sciences in Leningrad, a position he held for the rest of his life, except for the five-year period (1941–1946) when the institute was directed by Academician Sergei Sobolev. In 1941 he was awarded the Stalin Prize. In 1951 he became a foreign member of the Polish Academy of Sciences and Letters in Kraków.

In analytic number theory, Vinogradov’s method refers to his main problem-solving technique, applied to central questions involving the estimation of exponential sums. The importance of trigonometric sums in the theory of numbers was first shown by Weyl in 1916.[7] In the 1920s the work of Hardy and Littlewood developed Weyl’s methods to attack other problems in analytic number theory. In its most basic form, it is used to estimate sums over prime numbers, or Weyl sums. It is a reduction from a complicated sum to a number of smaller sums which are then simplified.

With the help of this method, Vinogradov tackled questions such as the ternary Goldbach problem in 1937 (using Vinogradov’s theorem, published in Some theorems concerning the theory of prime numbers, 1937 ), and the zero-free region for the Riemann zeta function. His own use of it was inimitable; in terms of later techniques, it is recognised as a prototype of the large sieve method in its application of bilinear forms, and also as an exploitation of combinatorial structure. He also used this technique on the Dirichlet divisor problem, allowing him to estimate the number of integer points under an arbitrary curve. This was an improvement on the work of Georgy Voronoy.

In 1918 Vinogradov proved the Pólya–Vinogradov inequality for character sums. Vinogradov received the highest honour the USSR Academy of Sciences could give, namely the Lomonosov Gold Medal. He was elected to the Royal Society of London in 1942 and to the London Mathematical Society in 1939.