You are here: Home › history › From this place, and from this day forth begins a new era in the history of the world – The Battle of Valmy 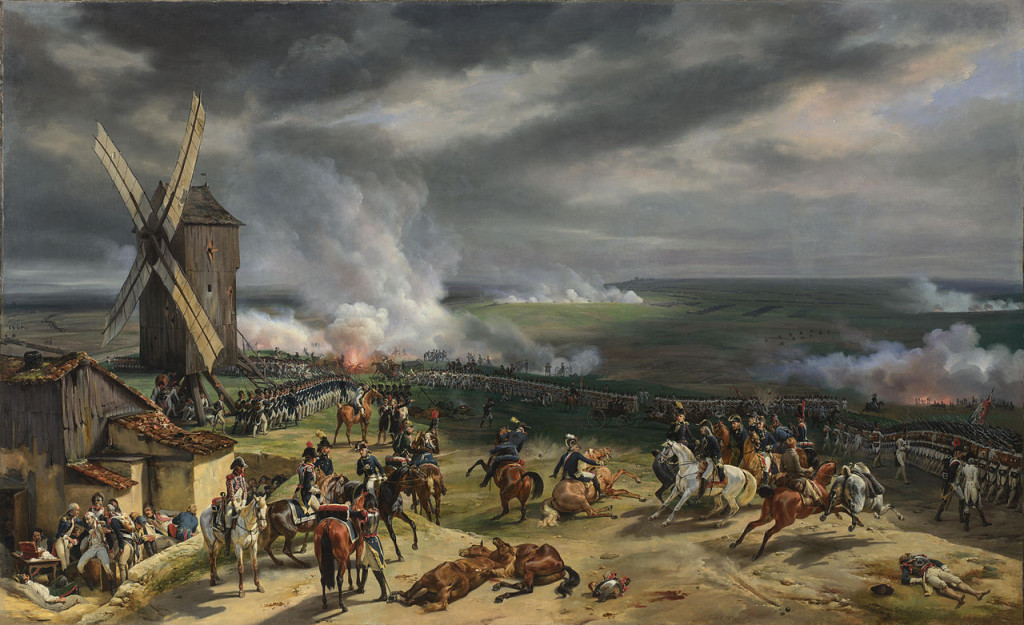 The Battle of Valmy, painting by Horace Vernet, 1826.

On September 20, 1792, the Battle of Valmy was fought. It was the first major victory by the army of France during the Revolutionary Wars that followed the French Revolution. Although being a small and localized victory, Valmy became a huge psychological victory for the Revolution at large. Overall, it permitted the development of the French Revolution and all its resultant ripple effects, and for that it is regarded as one of the most significant battles of all time. Usually, for being a history of science blog, we only refer to historical battles, if they have had some significant impact on history or on technical developments. Besides being such a significant event for the French revolution, we refer today to the Battle of Valmy also because it left a lingering effect on famous German writer, scientist, and politician Johann Wolfgang von Goethe,[4] who participated in the battle as an observer. But, we will come back to that later. Let’s start with some background information.

War of the First Coalition

In the course of the French Revolution the monarchies of Europe became rather concerned that revolutionary fervor would spread also to their countries. The War of the First Coalition was an effort to stop the revolution, or at least contain it to France. France declared war on the Habsburg monarchy of Austria on 20 April 1792, and the Kingdom of Prussia joined the Austrian side a few weeks later. The coalition initiated a series of invasions of France by land and sea, with Prussia and Austria attacking from the Austrian Netherlands and the Rhine, and Great Britain supporting revolts in provincial France and laying siege to Toulon supported by French émigrés. In the war’s early encounters, French troops did not distinguish themselves, and enemy forces advanced dangerously deep into France intending to pacify the country, restore the traditional monarchy, and end the Revolution.

King Frederick William II of Prussia had the support of Great Britain and the Austrian Empire to send the Duke of Brunswick, considered one of the best generals of the day, towards Paris with a large army. Brunswick’s allied invasion force of veteran Prussian and Austrian troops was augmented by large complements of Hessians and the French royalist Army of Condé. Different sources give different figures for the size of the Allied army, but all fall in roughly the same range. The Prussians provided 40,000-42,000 men and the Austrians 29,000-30,000, supported by 5,000 Hessians and somewhere between 8,000 and 15,000 French émigrés, who made up an enthusiastic, experienced but unreliable cavalry force.[2] The French commander Charles Dumouriez, meanwhile, had been marching his army northeast to attack the Austrian Netherlands, but this plan was abandoned because of the more immediate threat to Paris. Just over half of the infantry of Dumouriez’s army were regulars of the old Royal Army, as were nearly all of the cavalry and, most importantly, the artillery. These provided a professional core to steady the enthusiastic volunteer battalions raised in June and July 1791.

Prelude of the Battle

The invading coalition army captured Longwy on 23 August and Verdun on 2 September, then moved on toward Paris through the defiles of the Forest of Argonne. In response, Dumouriez halted his advance to the Netherlands and reversed course, approaching the enemy army from its rear. From Metz, general François Kellermann moved to his assistance, joining him at the village of Sainte-Menehould on 19 September. The French forces were now east of the Prussians, behind their lines. The Prussians could have marched straight towards Paris unopposed, but this course was never seriously considered, because the threat to their lines of supply and communication was too great to be ignored. The unfavorable situation was compounded by bad weather and an alarming increase in sickness among the troops. With few other options available, Brunswick turned back and prepared to do battle.

The terrain in the area was open and possessed three areas of raised ground: the first located near the road intersection at la Lune, the next to the northwest, topped by a windmill near the village of Valmy and flanked to the north by Mont Yvron. As Kellermann’s men began their movement early on September 20, Prussian columns were sighted to the west. Quickly setting up a battery at la Lune, French troops attempted to hold the heights but were driven back. This action did buy Kellermann sufficient time to deploy his main body on the ridge near the windmill, where they were aided by men from Dumouriez’s army who shifted north to hold Mont Yvron.[1]

Brunswick headed through the northern woods believing he could cut off Dumouriez. But at the moment when the Prussian manœuvre was nearly completed, Kellermann advanced his left wing and took up a position on the slopes between Sainte-Menehould and Valmy. His command centered around the old windmill and his veteran artillerists were well-placed upon its accommodating rise to begin the Cannonade of Valmy. As the Prussians emerged from the woods, a long-range gunnery duel ensued and the French batteries proved superior. The Prussian infantry made a cautious, and fruitless, effort to advance under fire across the open ground. A pivotal moment was reached when Kellermann raised his hat and made his famous cry of “Vive la Nation”. The cry was repeated again and again by all the French army, and had a crushing effect upon Prussian morale. The French troops sang La Marseillaise [3] and Ça Ira, and a cheer went up from the French line. To the surprise of nearly everyone, Brunswick broke off the action and retired from the field. The Prussians rounded the French positions at a great distance and commenced a rapid retreat eastward. Neither side suffered heavy casualties in the artillery duel – Prussian casualties came to 164, French to around 300.

The two armies remained in the vicinity of Valmy for the next ten days. Dumouriez attempted to open negotiations with the Prussians in the hope that he could detach them from the Alliance against France, but on the day after the battle France officially became a Republic. Frederick William demanded the restoration of the monarchy as a first step towards peace, and in return the French demanded that the Prussians evacuate all French territory before negotiations could continue.[2] This engagement was the turning point of the Prussians’ campaign. Beset with food shortages and dysentery, their retreat continued well past the Rhine river. Though the casualties were light, Valmy rates as one of the most important battles in history due to the context in which it was fought. The French victory effectively preserved the Revolution and prevented outside powers from either crushing it or forcing it to even greater extremes.[1]

The famous German writer Johann Wolfgang von Goethe [4], who was present at the battle with the Prussian army, later wrote that he was approached by some of his comrades in a state of dejection. He had previously cheered them up with memorable and clever quotes but his only consolation this time was,

“From this place, and from this day forth begins a new era in the history of the world, and you can all say that you were present at its birth.“