You are here: Home › aviation › Juan de la Cierva and the Autogiro 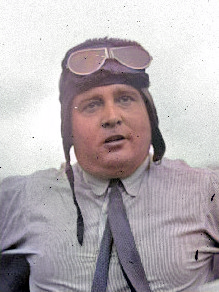 On September 21, 1895, Spanish civil engineer and aviation pioneer Juan de la Cierva y Codorníu was born. His most famous accomplishment was the invention in 1920 of the Autogiro, a single-rotor type of aircraft, a predecessor of today‘s helicopter.

Juan de la Cierva was born in Murcia, Spain to a wealthy family. Although trained as a civil engineer, Cierva became interested in aviation early in his youth. After several successful experiments with aviation as a boy, he eventually earned a civil engineering degree. For six years he attended the Escuela Especial de Ingenieros de Caminos, Canales y Puertos in Madrid, Spain, where he studied theoretical aerodynamics. Following this, he entered a competition to design military aircraft for the government and built a biplane bomber with an airfoil (the part of a plane that provides lift) that he designed mathematically. The plane was tested in May 1919, but it crashed when the pilot stalled it.[1]

Cierva believed that fixed-wing aircraft were unsafe, so he experimented with a rotary-wing design. In 1919 he started to consider the use of a rotor to generate lift at low airspeed, and eliminate the risk of stall. In order to achieve this, he utilized the ability of a lifting rotor to autorotate, whereby at a suitable pitch setting, a rotor will continue to rotate without mechanical drive, sustained by the torque equilibrium of the lift and drag forces acting on the blades. This phenomenon was already known, and was available as a safety feature to allow controlled descent of a helicopter in the event of engine failure. With De la Cierva‘s autogiro, the rotor was drawn through the air by means of conventional propeller, with the result that the rotor generated sufficient lift to sustain level flight, climb and descent.

Before this could be satisfactorily achieved, De la Cierva experienced several failures primarily associated with the unbalanced rolling movement generated when attempting take-off, due to dissymmetry of lift between the advancing and retreating blades. This major difficulty was resolved by the introduction of the flapping hinge. In 1923, De la Cierva‘s first successful Autogiro was flown in Spain. In a fixed-wing aircraft, lift is provided by the wing, thrust by the propeller. Cierva, though, believed that the autogiro controlled these forces better than fixed-wing aircraft, which had a tendency in those days to stall, or lose lift suddenly. He also wanted to develop an aircraft that needed only a short takeoff run and could slowly land in small areas. The autogiro was a major step toward those goals.[1]

In 1925, he demonstrated his autogiro to the British Air Ministry at Farnborough, Hampshire, which was a great success, and resulted in an invitation to continue the work in the UK. The same year, de la Cierva moved to England where, with the support of Scottish industrialist James G. Weir, he established the Cierva Autogiro Company. On September 18, 1928, he flew one of his autogiros (C.8) across the English Channel, and in 1930, he flew one from England to Spain. As De la Cierva‘s autogiros achieved success and acceptance, others began to follow and with them came further innovation. Most important was the development of direct rotor control through cyclic pitch variation, achieved initially by tilting the rotor hub and subsequently by Raoul Hafner by the application of a spider mechanism that acted directly on each rotor blade. The introduction of jump take-off was another major improvement in capability. The rotor was accelerated in no-lift pitch until the rotor speed required for flight was achieved, and then declutched.

At the outbreak of the Spanish Civil War in 1936, de la Cierva supported the forces of Francisco Franco, while his brother was executed by the Republican army in Paracuellos del Jarama. In a very ironic twist of fate the man who spent the better part of his life to develop a safe aircraft would loose his own life in an aircraft accident. On the morning of 9 December 1936, de la Cierva boarded a Dutch DC-2 of KLM at Croydon Airfield, bound for Amsterdam, which during take off should stall and crash on the roof of a building at the end of the runway.[2] Autogiros were used during the 1930s for military liaison, mail delivery, and agricultural purposes.

De la Cierva’s work on rotor dynamics and control made possible the modern helicopter, whose development as a practical means of flight had been prevented by these problems.