You are here: Home › engineering › Transatlantic Telecommunication Via Voice 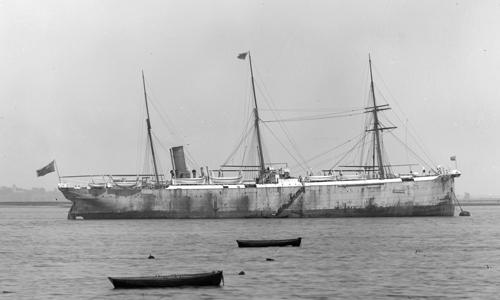 On September 25, 1956,  the world’s first submarine transatlantic cable for telephony TAT-1 (Transatlantic No. 1) was inaugurated. It was laid between Gallanach Bay, near Oban, Scotland and Clarenville, Newfoundland between 1955 and 1956 by the cable ship Monarch. You might wonder how it was possible to route a call between Europe and the United States before the mid 1950s, well at least by cable. Don’t you at least remember some old black and white movies, where they claimed to make a phone call across the Atlantic? Well you’re right.

Transatlantic Calls before the Underwater Cable

But all transatlantic calls prior to 1956 were relayed by radio transmission, which was expensive, unreliable, and often disturbed be interfering noise. But, now you might argue that there has been a transatlantic cable almost 100 years earlier. And again you are right. But, this first transatlantic telegraph cable laid in 1858 by businessman Cyrus West Field was only meant to transmit Morse signals and not such complex signals as the human voice.

How to lay a Cable Across the Atlantic

The first attempt to lay a cable between Great Britain and America took place in 1857 and 1858. Although the experience with coastal cables was good, the cable laid across the Atlantic became unusable after a few weeks of operation because Wildman Whitehouse used too high voltages during operation. It is suspected that the cable would not have had a long service life due to insulation problems caused by the manufacture and handling of the cable. Ten years later, however, better-insulated cables were available which had a much longer service life. So-called wound cables in the form of submarine cables were used. A new transatlantic line was laid in 1865 by the Great Eastern steamship, but the cable tore 600 miles off the coast of Newfoundland and could not be salvaged. Between July 13 and 27, 1866, another cable was laid by the Great Eastern and put into operation on July 28, 1866. The cable section laid in 1865 could also be salvaged and the missing section added.[6] In 1874 the Faraday laid the first transatlantic telegraph cable for the Siemens brothers Wilhelm and Werner von Siemens, which was operational until 1931.[2]

However, the famous cable we are talking about in this article had 36 voice channels and 51 amplifiers located at a distance of 70 km. In the first 24 hours of use, over 700 calls were performed wherefore the capacity was soon increased. Even though, the TAT-1 was a great success, it was just the first of a whole series. In the first 24 hours of operation, 588 calls were transferred between London and the USA and 119 from London to Canada. The capacity of the cable was therefore soon expanded to 48 channels. TAT-1 was finally shut down in 1978 and followed by the TAT-2. The successor of the TAT-1 was upgraded by the capacity as well as a new method called ‘time-assigned speech interpolation’.  This means that channels are only assigned when the caller is actually speaking.

The coaxial TAT-3 was installed between 1963 and 1965; it stretched from Great Britain to New Jersey and had a capacity of 138 voice channels with a maximum of 276 voice connections and an amplifier distance of 37 km. TAT-4 was installed in 1965 between France and New Jersey with a capacity of 345 voice connections; two voice circuits served to connect Austria with the USA. From 1968 Austrians could also reach Canada via CANTAT. The 6300 km long TAT-6 followed in 1976 between France and the USA; it had 4200 speech circuits and required 693 repeaters at a distance of 9 km.

More TAT versions later followed, increasing the number of channels making it possible to include more and more countries for faster and safer communications. The current generation of transatlantic communication cables, TAT-14, of course offers digital connectivity based on fiber optics enabling bandwidths of up to 3.2 Tbps (only in theory, in practice 1.87 Tbps can be reached).