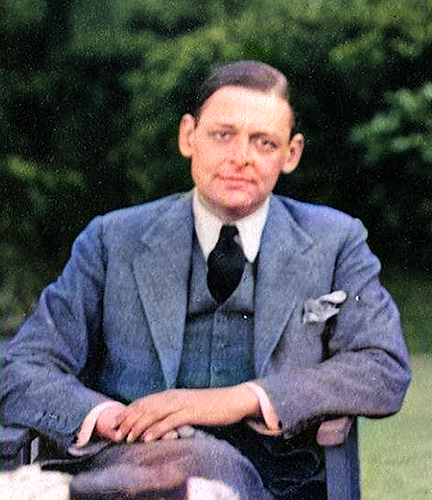 On September 26, 1888, the publisher, playwright, literary and social critic and “arguably the most important English-language poet of the 20th century”, Thomas Stearns Eliot, aka T. S. Eliot, was born, who was awarded the Nobel Prize in Literature in 1948. Although he was born an American, he moved to the United Kingdom in 1914 (at age 25) and was naturalised as a British subject in 1927 at age 39.

Born into a middle class family as the last of six surviving children, Eliot’s father Henry Ware Eliot (1843–1919), was a successful businessman, president and treasurer of the Hydraulic-Press Brick Company in St. Louis. His mother, Charlotte Champe Stearns (1843–1929), wrote poetry and was a social worker. As a child, Eliot had to overcome physical limitations, struggling from a congenital double hernia, he was unable to participate in many physical activities and thus was prevented from interacting socially with his peers. Being isolated rather often, his love of literature developed and the young boy immediately became obsessed with books and was completely absorbed in tales depicting savages, the Wild West, or Mark Twain’s Tom Sawyer.[3] Eliot “would often curl up in the window-seat behind an enormous book, setting the drug of dreams against the pain of living.” as Eliot’s friend Robert Sencourt comments in his biography.

Eliot was educated at Harvard and did graduate work in philosophy at the Sorbonne. After a year in Paris, he returned to Harvard to pursue a doctorate in philosophy, but returned to Europe and settled in England in 1914, where he was for a time a schoolmaster and a bank clerk. In England he first worked as a bank clerk, but then became director of a prestigious publishing house. In 1915 he married Vivienne Haigh Wood. During a trip to Paris in 1920 he first met James Joyce, with whom he later became friends. In 1922 he founded the literary journal The Criterion, whose editor he remained until it was discontinued in 1939.

In 1927, Eliot became a British citizen and about the same time entered the Anglican Church. It was in London that Eliot came under the influence of his contemporary Ezra Pound, who recognized his poetic genius at once, and assisted in the publication of his work in a number of magazines, most notably “The Love Song of J. Alfred Prufrock” in Poetry in 1915. His first book of poems, Prufrock and Other Observations, was published in 1917, and immediately established him as a leading poet of the avant-garde. With the publication of The Waste Land in 1922, now considered by many to be the single most influential poetic work of the twentieth century, Eliot’s reputation began to grow to nearly mythic proportions; by 1930, and for the next thirty years, he was the most dominant figure in poetry and literary criticism in the English-speaking world.

The drama Murder in the Cathedral was published in 1935. Over the next two decades various essays were published, including the important lyrical work Four Quartets in 1944. He was awarded the Nobel Prize in Literature in 1948, “for his outstanding, pioneer contribution to present-day poetry“. In 1952 T. S. Eliot became president of the London Library. In 1943 he was elected to the American Academy of Arts and Letters, in 1954 to the American Academy of Arts and Sciences and in 1960 to the American Philosophical Society. Over the years he received numerous honorary doctorates, including from the Sorbonne, Yale University, Oxford and Munich. Until shortly before his death, he published further essays and dramas, including The Confidential Clerk and The Elder Statesman. T. S. Eliot died in London on 4 January 1965 at the age of 76.

T.S. Eliot is considered to be one of the most daring innovators of twentieth-century poetry. Never compromising either with the public or indeed with language itself, he followed his belief that poetry should aim at a representation of the complexities of modern civilization in language and that such representation necessarily leads to difficult poetry. Despite this difficulty his influence on modern poetic diction has been immense.

We are the hollow men
We are the stuffed men
Leaning together
Headpiece filled with straw. Alas!
Our dried voices, when
We whisper together
Are quiet and meaningless
As wind in dry grass
Or rats’ feet over broken glass
In our dry cellar.  (T. S. Eliot, from ‘The Hollow Men’, 1925)

The emphasis in Eliot’s work was on poetry. He is regarded as an outstanding poet of his time, who saw his role models in Vergil, Dante and William Shakespeare.[5] He also attached great importance to metaphysical poetry. In a 1921 publication, he particularly emphasized the English poet John Donne, thus triggering an international discussion of metaphysical poets. He also wrote influential critical essays on the poetry of Romanticism. Eliot’s themes were time and eternity, the struggle for the rebirth of the spirit, reconciliation with the spirits of the past. His drama was mainly inspired by William Butler Yeats. He also made free rhythms and abstract poetry, partly with musical compositional elements, popular in Europe.

Eliot regarded literature as a way of uncovering order in chaotic reality and thus directly influencing individual life. His way of thinking was influenced by Buddhism, Christian mysticism and ancient philosophy. He argued that the present could only be understood if the past was studied intensively. He himself exerted a strong influence on some important later thought currents, including existentialism.