You are here: Home › art › Titian – the Sun Amidst Small Stars 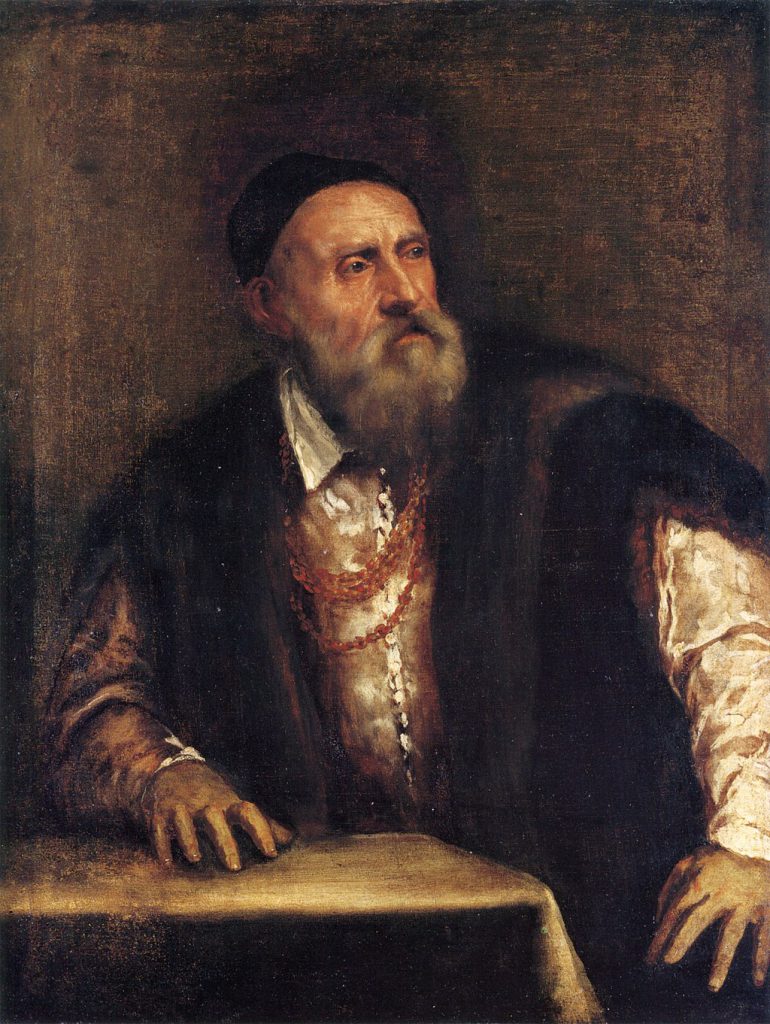 On August 27, 1576, Italian painter Tiziano Vecelli, better known as Titian, passed away. The most important member of the 16th-century Venetian school, he was recognized by his contemporaries as “The Sun Amidst Small Stars“. Titian was one of the most versatile of Italian painters, equally adept with portraits, landscape backgrounds, and mythological and religious subjects. His painting methods, particularly in the application and use of colour, would exercise a profound influence not only on painters of the late Italian Renaissance, but on future generations of Western art.

‘Although Titian’s works seem to many to have been created without much effort, this is far from the truth and those who think so are deceiving themselves.. .The method he used is judicious, beautiful, and astonishing, for it makes pictures appear alive and painted with great art, but it conceals the labour that has gone into them’
Giorgio Vasari, Lives of the Most Excellent Painters, Sculptors, and Architects (1568)

Tiziano Vecellio was born in Pieve di Cadore in the Dolomites, the oldest of four children. He came from a well-off family of lower nobility. His exact date of birth is still controversial, as there are no documents or other written evidence of his birth. Contemporaries prove that his talent was discovered very early. For the time being Titian and his brother Francesco were sent to their uncle in Venice to look for a suitable apprenticeship for both of them. In Venice they were then trained by the mosaic painter Sebastiano Zuccato. Zuccato, possibly a friend of the family, enabled Titian to be accepted into the workshop of the then most renowned painters of Venice, such as Gentile and Giovanni Bellini.

In 1507, the city of Venice commissioned the Giorgione, already well known at that time, to carry out the external frescoes on the Fondaco dei Tedeschi, rebuilt in 1505 under the direction of Antonio Abbondi. Later, however, Giorgione and Titian became rivals, although they continued to work together. As a result, the attribution of many of the works written during this period is still controversial today. After the sudden death of Giorgione in 1510, Titian remained faithful to his style for some time. The death of Giorgione (1510) and Giovanni Bellini (1516) left Titian without serious rivals in the Venetian school. For the next sixty years Titian was to be the undisputed master of Venetian painting. 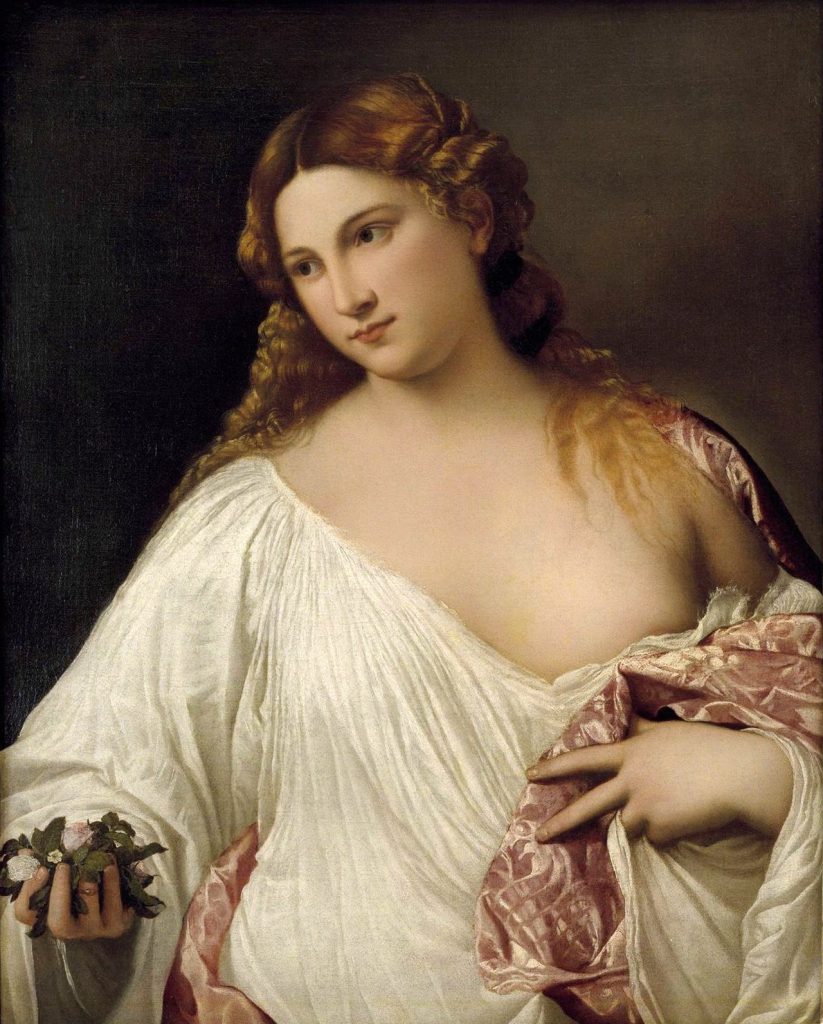 After he had rejected the invitation of the humanist Pietro Bembo to enter the service of the Holy See,[3] Titian received in 1513 the patent of real estate agent La Senseria at the Fondaco dei Tedeschi, which was coveted by artists. In the same year he opened a workshop on the Grand Canal near San Samuele. It was not until 1517 that Titian was granted the privileges of a sinecure of the city of Venice, for which he had applied years before: he became Superintendent of the government. As such, he had to complete Bellini’s paintings in the Great Council Chamber. He was also to replace the damaged battle depiction in the 14th century Sala del Collegio with an oil painting.

Between 1516 and 1530 Titian abandoned the Giorgionesque style and turned to a more monumental style. During these years he established relations with Alfonso d’Este (1516 he travelled to Ferrara for the first time), for whom he painted the Feast of Venus (1518-1519), the Bacchanal (1518-1519, both in the Prado, Madrid) and Ariadne on Naxos (in the National Gallery, London). In Ferrara he became friends with the poet Ludovico Ariosto, whom he portrayed several times.[1] He also came into contact with the Duke of Mantua Federico II Gonzaga, who later became his most important patron. At the same time Titian continued his series of small-format pictures of women and Madonnas. These depictions of women, most likely painted by Venetian courtesans, are among the early highlights of his oeuvre. 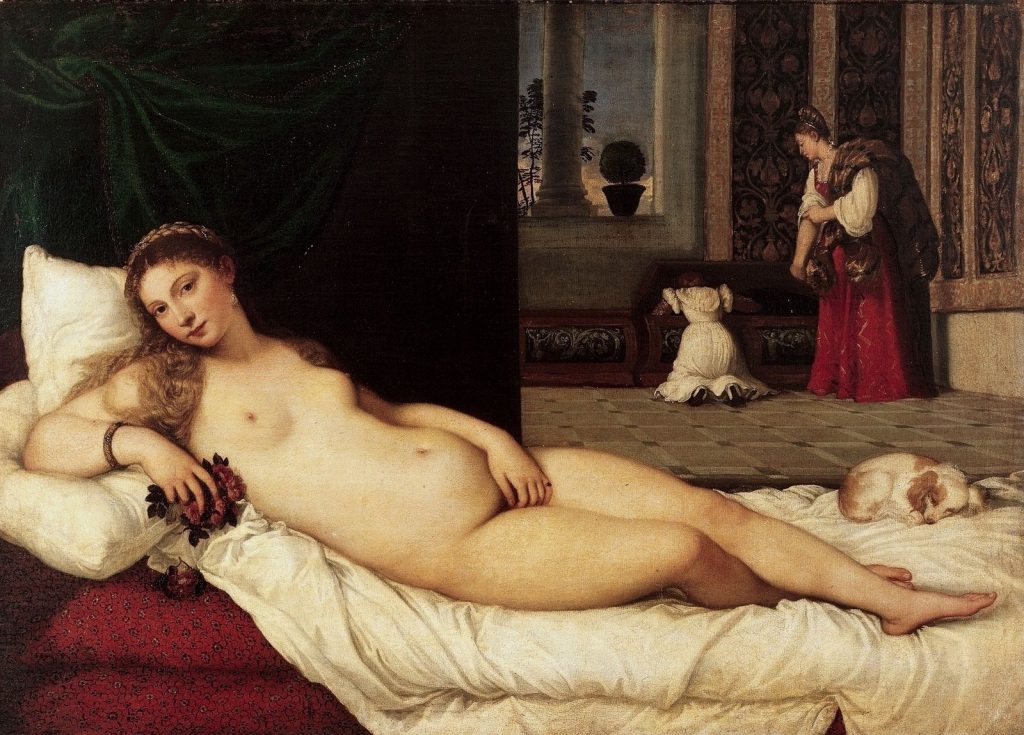 Harbinger of the Baroque

From 1516 to 1518 the most important picture of his career, the Assunta (Assumption) for the Church of Santa Maria Gloriosa dei Frari in Venice, was created. In 1530 he created the extraordinary death of Petrus Martyr for the Church of San Zanipolo (destroyed in 1867 by the fire of an Austrian grenade). In 1532 Titian went to Bologna on behalf of Federico Gonzaga, where Emperor Charles V was staying. In 1537, the Venetian government, dissatisfied with the neglect of the works in the Doge’s Palace, revoked his painting patent in favour of Giovanni Antonio da Pordenone, Titian’s only rival at the time. However, he died at the end of 1539, so that Titian received the patent back. From 1542 Pope Paul III tried to bring Titian to Rome, but the artist did not follow the call until four years later. His goal was a papal fiefdom for his son Pomponio, with which his livelihood would have been secured. However, the artist was denied this fiefdom. Nevertheless, he was given a fitting welcome, he was appointed an honorary citizen of the city, and in this dignity he succeeded the great Michelangelo.[2] 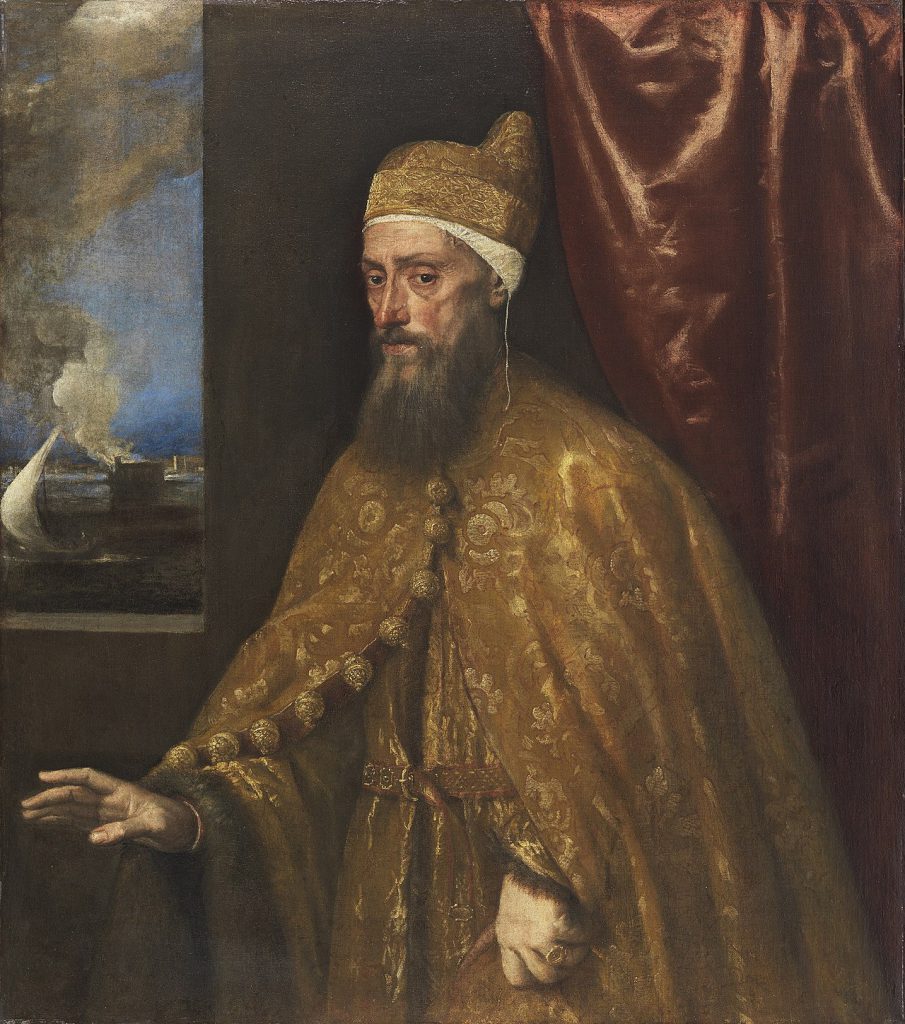 During the last 25 years of his life (1550-1576) Titian worked mainly for Philip II and as a portraitist. The painting Portrait of a General comes from this creative phase. He therefore began to withdraw more and more from the events in Venice. Due to the fact that he completed many of the copies made by his pupils himself, there are also great difficulties in attributing and dating his late work. Titian was at the Council of Trent in 1555. In 1556 he awarded Paolo Veronese the first prize in the evaluation of paintings for Sansovino’s library. In 1566 he was admitted to the Florentine Academy and was given control by the Council of Ten over the prints produced from his works. Even towards the end of his life he accepted further commissions. At that time his main commissioner was still Philip II, for whom he painted the famous series of Mythological Pictures of Poetry.

He continued to accept commissions to the end of his life. Like many of his late works, Titian’s last painting, the Pietà, is a dramatic, nocturnal scene of suffering. He apparently intended it for his own tomb chapel. He had selected, as his burial place, the chapel of the Crucifix in the Basilica di Santa Maria Gloriosa dei Frari, the church of the Franciscan Order. In payment for a grave, he offered the Franciscans a picture of the Pietà that represented himself and his son Orazio, with a sibyl, before the Savior. He nearly finished this work, but differences arose regarding it, and he settled on being interred in his native Pieve. While the plague raged in Venice, Titian died of a fever on 27 August 1576.

Titian was, along with Raphael,[4] one of the first artists to increase the value of their paintings by adding a signature. Titian’s view of art was less classical/idealistic than that of Raphael or Michelangelo. Before his trip to Rome in 1546, he probably had very little contact with ancient cultural treasures. He never studied them as intensively and imitatively as the Roman painters did. Titian’s work combines an elementary physis with the traditions of Venetian art. His characters are not spiritualized or stylized like those of the great Roman masters, but lively and omnipresent, which is often referred to as the power of painting. In contrast to Michelangelo, this physically strong representation was less a means of producing artistic expression than an end in itself. What is unusual is the long period in which Titian’s œuvre has been represented. It extends over more than seven decades and is almost congruent with the heyday of Venetian painting. This long process of development is also evident in Titian’s own sublimity. It thus spans the entire history of the eventful 16th century and thus of the High Renaissance and parts of Mannerism.