You are here: Home › art › Raphael and his famous School of Athens 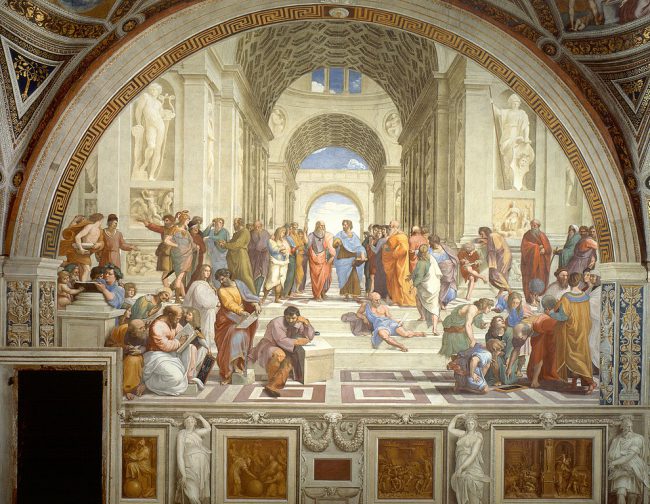 On March 28 or April 6, 1483, Italian painter and architect of the High Renaissance Raffaello Sanzio da Urbino, known as Raphael was born.[4] His work is admired for its clarity of form, ease of composition, and visual achievement of the Neoplatonic ideal of human grandeur. Together with Michelangelo [5] and Leonardo da Vinci,[2] he forms the traditional trinity of great masters of that period.

Raphael was born in the small but artistically significant central Italian city of Urbino in the Marche region, where his father Giovanni Santi was court painter to the Duke. His mother Màgia died in 1491 when Raphael was eight, followed on August 1, 1494 by his father. Thus, Raphael, orphaned at eleven, was taken care of his only paternal uncle Bartolomeo, a priest. According to Renaissance art historian Vasari,[1] his father placed him in the workshop of the Umbrian master Pietro Perugino as an apprentice. Vasari wrote that it was impossible to distinguish between their hands at this period, but many modern art historians claim to do better and detect his hand in specific areas of works by Perugino or his workshop. Apart from stylistic closeness, their techniques are very similar as well. Raphael is described as a “master”, that is to say fully trained, in December 1500.

Raphael’s first documented work was the Baronci altarpiece for the church of Saint Nicholas of Tolentino in Città di Castello. In the following years he painted works for other churches there, including the Mond Crucifixion (about 1503) and the Brera Wedding of the Virgin (1504). In 1502 he went to Siena at the invitation of another pupil of Perugino, Pinturicchio to help with the cartoons, and very likely the designs, for a fresco series in the Piccolomini Library in Siena Cathedral. Raphael led a “nomadic” life, working in various centres in Northern Italy, but spent a good deal of time in Florence, perhaps from about 1504. Raphael was able to assimilate the influence of Florentine art, whilst keeping his own developing style. The most striking influence in the work of these years is Leonardo da Vinci, who returned to the city from 1500 to 1506 and was more than thirty years older than Raphael. Raphael’s figures begin to take more dynamic and complex positions, and though as yet his painted subjects are still mostly tranquil, he made drawn studies of fighting nude men, one of the obsessions of the period in Florence. He also perfects his own version of Leonardo’s sfumato modelling, to give subtlety to his painting of flesh, and develops the interplay of glances between his groups, which are much less enigmatic than those of Leonardo. But he keeps the soft clear light of Perugino in his paintings. 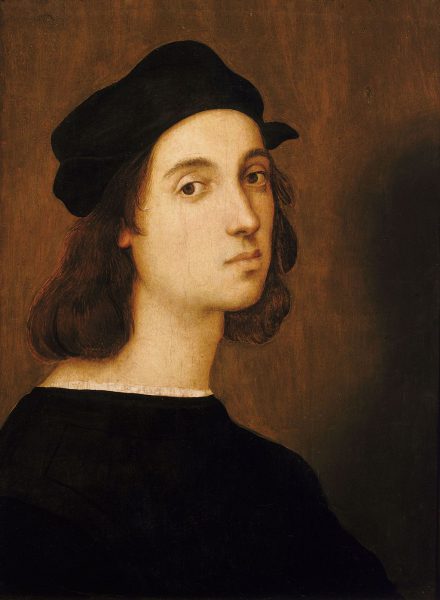 Rome and the Famous Stanze

By the end of 1508, Raphael had moved to Rome, where he lived for the rest of his life. He was invited by the new Pope Julius II, perhaps at the suggestion of his architect Donato Bramante, then engaged on St. Peter’s Basilica, who came from just outside Urbino and was distantly related to Raphael. Unlike Michelangelo, who had been kept lingering in Rome for several months after his first summons, Raphael was immediately commissioned by Julius to fresco what was intended to become the Pope’s private library at the Vatican Palace. This was a much larger and more important commission than any he had received before. This first of the famous “Stanze” or “Raphael Rooms” to be painted, now known as the Stanza della Segnatura after its use in Vasari’s time, was to make a stunning impact on Roman art, and remains generally regarded as his greatest masterpiece, containing The School of Athens, The Parnassus (Literature) and the Disputa (Theology).

The School of Athens

The subject of the “School” is actually “Philosophy,” or at least ancient Greek philosophy. Plato and Aristotle appear to be the central figures in the scene. However, all the philosophers depicted sought knowledge of first causes. Many lived before Plato and Aristotle, and hardly a third were Athenians. Commentators have suggested that nearly every great ancient Greek philosopher can be found in the painting, but determining which are depicted is difficult, since Raphael made no designations outside possible likenesses, and no contemporary documents explain the painting. The identities of some of the philosophers in the picture, such as Plato or Aristotle, are certain. Beyond that, identifications of Raphael’s figures have always been hypothetical. To complicate matters, beginning from Vasari’s efforts, some have received multiple identifications, not only as ancients but also as figures contemporary with Raphael. Vasari mentions portraits of the young Federico II Gonzaga, Duke of Mantua, leaning over Bramante with his hands raised near the bottom right, and Raphael himself. He was writing over 40 years after the painting, and never knew Raphael, but no doubt reflects what was believed in his time. Many other popular identifications of portraits are very dubious.

The parenthetical names are the contemporary characters from whom Raphael is thought to have drawn his likenesses. 1: Zeno of Citium 2: Epicurus Possibly, the image of two philosophers, who were typically shown in pairs during the Renaissance: Heraclitus, the “weeping” philosopher, and Democritus, the “laughing” philosopher. 3: unknown (believed to be Raphael) 4: Boethius or Anaximander or Empedocles 5: Averroes 6: Pythagoras 7: Alcibiades or Alexander the Great 8: Antisthenes or Xenophon or Timon 9: Raphael, Fornarina as a personification of Love or Francesco Maria della Rovere? 10: Aeschines or Xenophon 11: Parmenides 12: Socrates 13: Heraclitus 14: Plato 15: Aristotle (Giuliano da Sangallo) 16: Diogenes of Sinope 17: Plotinus 18: Euclid or Archimedes with students (Bramante) 19: Strabo or Zoroaster (Baldassare Castiglione) 20: Ptolemy R: Apelles 21: Protogenes (Il Sodoma, Perugino, or Timoteo Viti

Raphael was clearly influenced by Michelangelo‘s Sistine Chapel ceiling in the course of painting the room.[4] These very large and complex compositions have been regarded ever since as among the supreme works of the grand manner of the High Renaissance, and the “classic art” of the post-antique West. The Vatican projects took most of his time, although he painted several portraits, including those of his two main patrons, the popes Julius II and his successor Leo X, the former considered one of his finest. For Agostino Chigi, the hugely rich banker and Papal Treasurer, he painted the Triumph of Galatea and designed further decorative frescoes for his Villa Farnesina, a chapel in the church of Santa Maria della Pace and mosaics in the funerary chapel in Santa Maria del Popolo. One of his most important papal commissions was the Raphael Cartoons, a series of 10 cartoons, of which seven survive, for tapestries with scenes of the lives of Saint Paul and Saint Peter, for the Sistine Chapel. He produced a number of significant altarpieces, including The Ecstasy of St. Cecilia and the Sistine Madonna. His last work, on which he was working up to his death, was a large Transfiguration, which together with Il Spasimo shows the direction his art was taking in his final years—more proto-Baroque than Mannerist.

Vasari says that Raphael eventually had a workshop of fifty pupils and assistants, many of whom later became significant artists in their own right. This was arguably the largest workshop team assembled under any single old master painter, and much higher than the norm. After Bramante’s death in 1514, Raphael was named architect of the new St Peter’s.[6] Most of his work there was altered or demolished after his death and the acceptance of Michelangelo’s design, but a few drawings have survived. He designed several other buildings, and for a short time was the most important architect in Rome, working for a small circle around the Papacy. Raphael was one of the finest draftsmen in the history of Western art, and used drawings extensively to plan his compositions. According to a near-contemporary, when beginning to plan a composition, he would lay out a large number of stock drawings of his on the floor, and begin to draw “rapidly”, borrowing figures from here and there. When a final composition was achieved, scaled-up full-size cartoons were often made, which were then pricked with a pin and “pounced” with a bag of soot to leave dotted lines on the surface as a guide.

According to Vasari, Raphael’s premature death on Good Friday (April 6, 1520), which was possibly his 37th birthday, was caused by a night of excessive sex with Luti, after which he fell into a fever and, not telling his doctors that this was its cause, was given the wrong cure, which killed him.

Raphael’s School of Athens: An Introduction, [10]