You are here: Home › war/crime › Alessandro Cagliostro – Imposter and Adventurer 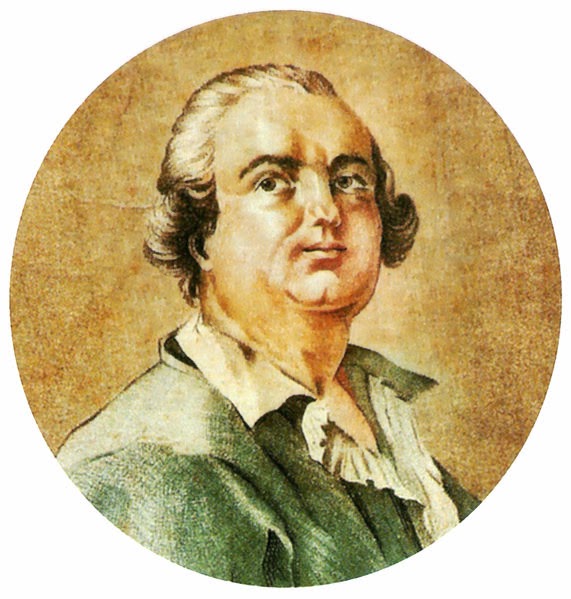 On August 26, 1795, Italian physician, occultist and adventurer Giuseppe Balsamo aka Count Alessandro di Cagliostro passed away. The history and stories around Cagliostro are shrouded in rumour, propaganda, and mysticism. Some effort was expended to ascertain his true identity when he was arrested because of possible participation in the Affair of the Diamond Necklace.[4]

Becoming the Count of Cagliostro

Cagliostro was born as the son of a Sicilian craftsman and bankrupt in the slums of Albergheria, Palermo, where he grew up. Despite the fact that Giuseppe Balsamo had to deal with a poor financial situation from early years on, he received a good education and became a novice at church later on. This duty influenced him critically. Balsamo learned chemistry in these years while getting to know many spiritual rites. Back then he was befriended with Vincenzo Marano, a wealthy goldsmith,  and asked by Balsamo to explore Mount Pellegrino for a hidden treasure in 1764. The two men agreed to follow the myth and Balsamo was supposed to use his occult knowledge in order to be safe in case of attacks by various creatures. During the journey, Balsamo attacked Marano, who was left bleeding and wondering what had happened to the boy—in his mind, the beating he had been subjected to had been the work of djinns. However, Balsamo fled to the city of Messina. According to his own statements, he travelled to Greece, Egypt, Arabia, Persia, Rhodes, where he allegedly took lessons in alchemy and related “sciences” from the Greek Althotas, and finally to Malta. There he introduced himself to the Grand Master of the Order of Malta as Count Cagliostro. From him, whose interests also lay in alchemy, he received recommendations for the famous houses of Rome and Naples, where he now travelled. He also gave the impression of being a goldmaker. In Rome, Cagliostro married the beautiful but unscrupulous Lorenza Feliciani, with whom he travelled under various names to many parts of Europe. He visited London and Paris in 1771 and sold love potions, youth elixirs, beauty mixtures, alchemical powders etc. and made high profits from his trade. After further travels on the continent he returned to London.

Alchemy, Magic, Forgery all over Europe

Cagliostro invented the Egyptian rite with 90 degrees. In 1775 he founded new lodges based on the Egyptian rites he created to counter the mystical trend in Freemasonry. His Egyptian Freemasonry belonged from then on to the system of his high stagings. Contrary to regular masonry, he was of the opinion that women should be included in the lodges on an equal footing. The first lodge, intended mainly for wealthy and noble ladies, was founded in The Hague in 1775. Cagliostro’s wife, Lorenza Feliciani, became Grand Master. Men were only admitted if they were Freemasons or if they had assets of their own, regardless of their religion. After a short time, Cagliostro fled from The Hague to Brussels because of lottery ticket fraud. Later he reappeared as Count Pellegrini in Venice. In 1779 he found access to the Kurland nobility in the Baltic town of Mitau, where he managed to serve the ladies with his androgynous brickwork and to introduce parts of the Kurland nobility to his adoption lodges until Countess Elisabeth von der Recke managed to see through his game.

In 1780 he also tried to introduce his Egyptian masonry in Saint Petersburg and to popularise his system under the protection of Catherine II. This plan failed, however, because the Countess of the Knight was able to warn the Tsarina. Cagliostro was then able to be unmasked as a charlatan at a spiritual seance in the residence of Prince Gagarin.  In Warsaw, Cagliostro pretended to be the Great Cophta of the Egyptian rite, which enabled him to gain access to bona fide Masonic lodges. The irregular Egyptian high-grade freemasonry Memphis-Misraim, invented by Cagliostro, is still practiced in some countries today. In Warsaw, Cagliostro was initially successful and, as part of his Egyptian ritual, also conducted spiritual sessions with underage girls as channel medium, until his magical and alchemistic operations and gimmicks were also exposed there in 1780 and he had to flee Warsaw. 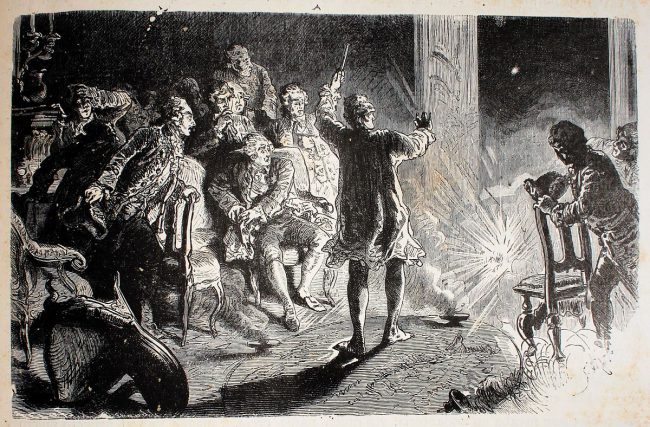 19th-century illustration of a Cagliostro performance in Dresden. Image: University of Sevilla, Spain

In 1781 Cagliostro worked in Strasbourg as a teacher for occultism and successfully as a magical healing artist. Johann Caspar Lavater went from Zurich to Strasbourg specifically to check whether his method of treatment was similar to that of the exorcist Gaßner. In Strasbourg, then the stronghold of mystical masonry, Cagliostro won the favor of the Cardinal and Archbishop Louis César Constantin de Rohan-Guéméné and entered the French court, where he replaced Franz Anton Mesmer.[5] Cagliostro set up an Egyptian lodge, the system of which was later partially implemented in Basel in the rectified Scottish rite.

The Affair of the Diamond Necklace and the Inquisition

During the Affair of the Diamond Necklace during the 1780s, Cagliostro was a suspect and held in prison for almost a year.[4] Fortunately for him, no evidence against him could be found and he was again a free man, almost. He was departed to England afterwards where he was accused of being Giuseppe Balsamo. In an open letter he was able to convince the public that he wasn’t. When Cagliostro tried to gain a foothold in Rome and founded a new Egyptian lodge there, he was arrested by the papal police on 27 December 1789. To save his head, he made a treacherous deal with the organs of the Roman Inquisition during his trial before the Court, making a propaganda confession: he accused the Illuminati  of misleading him.[6] Allegedly, the Illuminati had made him an Illuminati in a country house in Frankfurt am Main and, without his knowledge, one of the twelve Grand Masters of the Illuminati. According to Cagliostro, Freemasons were the hidden initiators of the French Revolution and he, Cagliostro, who pretended to be an Illuminate and who never belonged to the Illuminati order, was one of the backers. His penitent swindle, with which he exploited the Church’s fear of Freemasons and radical enlightenment and revolutionary aspirations, saved his head and he was sentenced to death for heresy, sorcery and Freemasonry, but the sentence was commuted to life imprisonment in 1791. Cagliostro was imprisoned in the angel castle. His wife was banished to a monastery. The Inquisition confiscated the esoteric, alchemical manuscript The Most Holy Trinosophy. Cagliostro died in the prison of the fortress of San Leo near San Marino after two strokes, which he suffered shortly after

The myths around Alessandro Cagliostro are numerous. Cagliostro was received in the best circles of society and lived, surrounded and admired by beautiful women, as a successful swindler and impostor at the expense of his contemporaries. It is said, that a great part of the money he made from forging was spent for good causes like maternity hospitals and orphanages. His interest in alchemy is undeniable. Alessandro di Cagliostro was one one the most controversial figures during the enlightenment period. Historians still discuss his ‘achievements’ during these days.  Cagliostro is often illustrated either as a hero or as nothing but a criminal. However, Cagliostro was an extraordinary forger. Giacomo Casanova, in his autobiography, narrated an encounter in which Cagliostro was able to forge a letter by Casanova, despite being unable to understand it

At yovisto academic video search, you may learn more about the Age of Enlightenment by Professor Justin Champion.